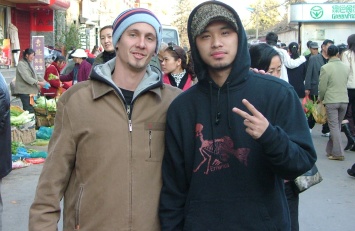 Only a year ago, Kunming native Hu Xuan was in the thick of the rat race in the fast-paced coastal metropolis of Guangzhou, working as a journalist during the day and a musician at night. One short year later, Hu has returned to Kunming and established himself as one of the pioneers of the city's nascent hiphop scene.

At the end of five years in Guangzhou in which he obtained an English degree and worked as editor of a popular webzine, Hu also spent a short time as frontman for a rap/metal band whose song lyrics were primarily in English. When the band's guitarist decided to pursue a career in pop music, the group disbanded and Hu decided to return to Kunming to make his own music.

After returning to Kunming last year the 22-year-old Hu - rapping under the name Tang Ren Ti (唐人踢) - wrote, rapped on and produced Jazz-rap is in the city now, arguably one of the more interesting albums released in China in 2006. 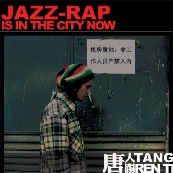 Hu's lyrics forego the gangsta rap-influenced trash-talking that is growing in popularity in coastal cities in favor of a jazz-infused and thoughtful diary of modern life in urban China. Hu said he was happy to return to his native Kunming after five years in Guangzhou.

"There's such a huge difference between the cities in terms of the speed of daily life... I can't stand the pace of life in Guangzhou, everyone's in a hurry," the black-hoodied Hu explained between puffs on his cigarette in a local café. "Kunming is nice because it's a lot slower than other cities and it's not trashed by heavy industry like most of the cities on the coast."

Using only a microphone and laptop computer to make the album, Hu recorded all the tracks on his album in Kunminghua, the local dialect spoken in Kunming. Aside from local dialect, the city's quiet nights have also provided creative fuel for his songs.

"A big source of inspiration for me is found during times of solitude," Hu explained. "I'll be hanging out at home by myself and the music will just come out."

Other sources of inspiration are Miles Davis and Bruce Lee, who he admires for their stylistic innovations.

"In their days, both of them were constantly moving forward," Hu said. "Chinese are smart, yet there are so many rappers here just imitating others. We can create our own music, there's no need to copy American gangsta rap."

Hu said his favorite hiphop acts at the moment are Mad Lib, MF Doom and The Nonce.

"Hiphop is universal - it's not America's, it's not Africa's. It belongs to anyone who can feel it," he said.

"One thing I like about hiphop is that it's a way to discuss your surroundings. But Chinese don't need to talk about selling drugs and killing - these guys [Chinese rappers] didn't grow up in that kind of environment."

Looking ahead to the year of the pig, Hu said he hopes to perform around town with other Kunming rappers.

"I like hiphop because it blends with my own culture; I wanna work with new friends and make a hiphop album that is representative of Yunnan."

Tang Ren Ti's album Jazz-rap is in the city now is available for 20 yuan at Stone Love clothing store on the east end of Wenlin Jie near the intersection with Cuihu Bei Lu.

not bad!this is the first time i hear a rap singing in kunming accent.

wicked. keep up the good work.

Damn, I was just in Kunming for 10 days, wish i knew this earlier!
Got to check this out, chinese hip hop is so hard to get by!