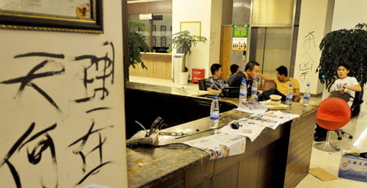 What would normally have been an occasion for celebration turned into a confrontation at Richland International Hospital last weekend after a woman died in childbirth. The death caused angry relatives to stage a sit-in that forced the hospital to temporarily close.

The woman reportedly died last Friday when her breathing stopped during labor, but her husband says that doctors did not tell him about his wife's death until 7pm the next day. The husband also claims that the doctors administered medicine to his wife without consulting him.

By Sunday, a group of relatives had gathered to protest at the hospital's conduct, though it is unclear whether or not they were already there for the birth. At some point their behavior became aggressive and they took over the hospital lobby.

A New Life Times reporter described seeing a half dozen memorial wreaths adorning the doors as he entered the hospital on Sunday. Inside, soil from a broken potted plant was spread across the floor and phrases like "murder," and "bring back my daughter" were scrawled on the walls in black ink.

A group of relatives sat around the registration desk while a half dozen police watched them from a nearby sofa.

During this sit-in, the hospital was forced to all but shut down, refusing new patients and transferring all but critical care patients to other facilities, although it was once again open for business by Tuesday afternoon.

Richland Hospital director Xu Mei, while seemingly dodging the issue of why doctors took so long to inform the woman's husband of her death, countered the families allegations of wrongdoing. According to Xu, the woman suffered from underlying health conditions that made the birth more dangerous.

The child survived in stable condition and has been transferred to another hospital for postnatal care.

Authorities have promised an investigation of both the hospital and the relatives' conduct.

Thanks for reporting on this. I live next to Richland and though I could read the graffiti I wondered abt the details of the incident.

Very sad. We survived childbirth at Richland last year, but were unimpressed with the lack of professionalism, honesty, knowledge and MDs. (The "hospital" appeared to be staffed by minimally trained nurses after hours.) I'm sure Richland will try to buy the family's silence and repaint the lobby and then more unwitting foreigners and middle class Kunmingers will assume from the name "international" and the beautiful lobby that the quality is similar to Bumrumgrad, Suan Dok, Ram, Lanna or Pra Ram IV in Thailand. But the name "international" and nice 装修 a good hospital do not make.