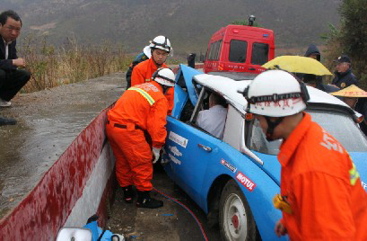 A much-publicized vintage car driving tour of Yunnan was cut short for a 1967 Citroën ID and its occupants when the driver lost control of the car and crashed into a concrete roadside abutment outside of Gejiu on Saturday.

The crash took place while the 60-year-old French driver and his 65-year-old wife, who was occupying the passenger seat, were driving from Yuanyang to Kunming. Afterward, the driver was trapped in the car until rescue crews arrived and used a hydraulic tool to pry open the driver's side door before lifting him out.

The seriousness of the couple's injuries has not been disclosed. They are reportedly cutting their trip short and heading back to France in a few days.

The Citroën was part of a group of 19 European classic cars whose European owners are on a driving tour of Yunnan from April 13 to 23. A representative from the tour's primary sponsor, China Harmony Travel ( 北京嘉和国际旅行社), blamed the accident on poor weather and the driver's unfamiliarity with the road. Traffic police say the accident is still under investigation.

The fleet of 19 cars, which includes makes such as Porsche, Jaguar, Bugatti, Cobra, Aston Martin and Mercedes, had already visited Stone Forest, Fuxian Lake, Jianshui, and Yuanyang before the accident. The remaining cars and drivers are due in Dali today and will continue on to Lijiang and Shangri-La before returning to Kunming on Friday. The cars will then be trucked to Guangdong and shipped back to Europe. 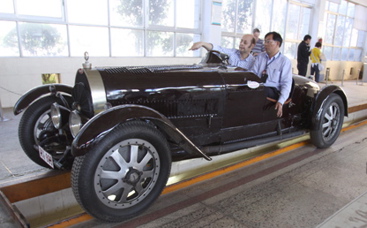 The group of drivers are vintage car enthusiasts, some of whom became enamored with China on a previous driving tour through Guangdong and Guangxi.