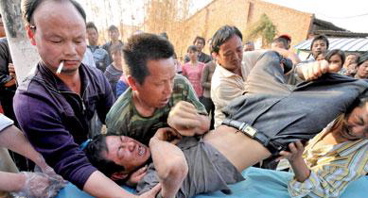 Kunming city management officers, aka chengguan, have become involved in another incident that has attracted negative local media attention. Yunnan Information News is reporting that chengguan backed over a man whose home they had just demolished and dragged him 50 meters.

The government-run newspaper is reporting that yesterday 33-year-old Li Chun (李春), who is deaf, brought his father, who has lung cancer, back from a hospital visit to their home in Banqiao Town (板桥镇) in southeast Kunming.

The two discovered upon their return that chengguan had overseen the demolition of their two-story concrete house while they were gone. As the chengguan prepared to depart, Li lay down underneath an unmarked chengguan van to prevent the officers from leaving.

With their forward path blocked, the chengguan's only exit option was to back up over Li, which they did. Li, who was holding the rear bumper, was dragged for roughly 50 meters. While the van was dragging Li, neighborhood residents tried to stop the van by breaking its windows with bricks.

A Yunnan Information News reporter sent to the scene described a dusty and bedraggled man lying under the van, with one of his shoes having fallen off and become lodged under one of the van's wheels. A group of camouflage-clad chengguan were milling around nearby. They declined to speak with the reporter.

Li, who neighbors say is impoverished, suffered lacerations on his feet and legs and was taken to a nearby hospital.

This is the latest in a series of injuries, public clashes, and accusations that have resulted in an increasingly poor reputation for Kunming's chengguan.

Li's family members are reportedly seeking compensation for his treatment.

We should cut these guys some slack. Nobody really appreciates how much work they have to do. In between beating up peddlers and tearing people's houses down they hardly have time to train "Little Chengguan" or chainsmoke cigarettes in their cars. Stop being so harsh on them. Who can honestly say that it wasn't a temporary worker who backed over that hoodlum?