New York Times mistakes dwarf park employees for Clinton, Chilean president
Kunming theme park Dwarf Empire has been receiving increasing attention from foreign media, even spurring ethical debates, but it is now part of a gaffe which may be in the running for one of the bigger blunders made by the New York Times. 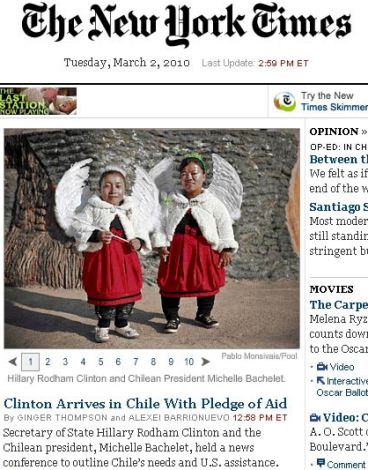 The error, which has since been corrected, was initially caught by the Times' rival The Washington Post and gained wide attention after being noted in the popular blog Boing Boing.

Prime Minister Sheikh Hasina of Bangladesh will meet with Chinese Premier Wen Jiabao this week seeking assistance for a US$8.7 billion deepwater port at Chittagong and accompanying rail and road links. Hasina arrives in Beijing tomorrow.

Also on the itinerary for Hasina's visit to China is a weekend stop in Kunming to examine the prospect of extending Yunnan's highway network into Bangladesh via Myanmar.

Indian media has taken interest in the development which, should it come to fruition, would be a significant Chinese foothold in the Bay of Bengal, which has traditionally been India's backyard.

In addition to its geostrategic ramifications, the transport corridor would make it easier for some goods shipped eastward to China to enter the mainland, avoiding the narrow Malacca Strait, home to pirates and US warships.

If rail links are built they would run through Myanmar and might eventually be part of the vast Eurasian rail network centered around Kunming that Beijing is currently promoting.

Kunming-Lhasa flights to resume this month
On March 28 China Eastern Airlines will resume flights from Kunming to Lhasa, Tibet, which were suspended in September of last year.