When the cage smashers come 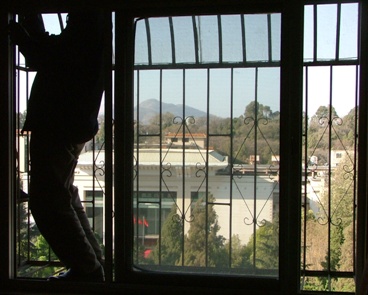 The Kunming government has made many seemingly spur-of-the-moment decisions to change the city's image in recent years, from eliminating most outdoor dining to planting 800,000 trees in one year to the current campaign to remove the anti-burglar metal cages mounted outside of windows.

After initially announcing that it would require the removal of all the protruding cages, known as fangdaolong (防盗笼), public backlash persuaded the Kunming government to only require that the cages on windows facing streets be removed.

Your correspondent was recently notified that the cages outside the streetside windows of his sixth-floor apartment were to be removed yesterday afternoon at 4:00. We've heard both good and bad stories from different people about their experiences with the cage removal, so we thought we'd share ours:

3:50 pm
I return home early from the office. A crew of four men are hard at work removing cages from the building next to mine. One man is looking down from the roof of the building, another is looking up from the bottom and two are inside cages, their power saws emitting showers of sparks.

I'm told that there are several apartments ahead of me in the queue and mine will have to wait until after five. I go up to my apartment, drop my bag onto the sofa and head for the kitchen. After contemplating a sinkful of dirty dishes in need of attention, I decide to head down the street for a beer in the sunshine, with the idea of being home by five.

4:30 pm
Just as my beer arrives, I receive a phone call from my landlady saying that the cage crew has been ringing my doorbell trying to get started on my cages. I ask her to tell them to wait 15 minutes. After downing the beer faster than I would have liked to, I'm on my way back home.

4:44 pm
I arrive outside my building. A man in a cage on the third floor starts scolding me for making him wait. I apologize for the inconvenience after reminding him that he told me they wouldn't be working on my apartment until after five. We both seem to take some pleasure in screaming at each other.

5:09 pm
The man in the cage, apparently in his early 40s, enters my home and surveys the work at hand. My apartment has two cages that need removal: one outside a spare bedroom, approximately two and a half meters across and another one wrapping around my kitchen, about ten meters in length. He says he and his crew are from Dali. They've been busy doing this for more than two months.

5:10 pm
The man begins screaming out the window, yelling directions at his younger coworkers. A power cord is lowered from the roof to the outside window, as is a small saw with a rotating disc used to grind through metal. After plugging in, he's ready to go.

Two men, both in their 20s, one in a yellow jumpsuit, the other in red, rappel down on thick ropes, stopping outside the spare bedroom cage. The older man on the inside grinds away at where the cage meets the building. 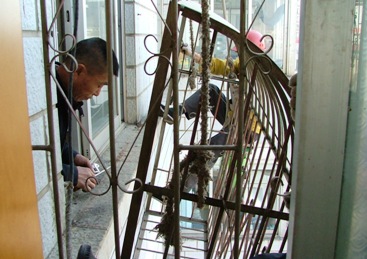 5:27 pm
The two rappelers start yanking on the cage, as the man from Dali pries at the cage with a screwdriver. The cage eventually gives, offering a pleasant unobstructed view of Changchong Mountain in Kunming's north.

5:29 pm
The rappeler in the red jumpsuit walks into my bedroom with a confused look on his face and asks if it's possible to exit my apartment via my bedroom closet door. I direct him to the entrance of my home and he disappears.

5:37 pm
Work starts on the cage outside my kitchen, with the man from Dali squatting over my sink. The man in the red jumpsuit has reappeared outside my window from above.

5:41 pm
There are three men with power saws hitting the cage at different locations. The floor of my kitchen is vibrating. 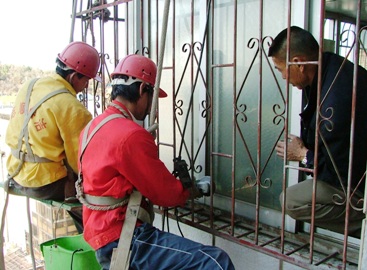 5:53 pm
The three men try to figure out why one section of the cage outside my kitchen is not cooperating. After a short discussion, a consensus is reached regarding where to cut. The guy in red makes way for the guy in yellow, whose power saw is evidently superior.

5:58 pm
My apartment is filled with the smell of smoke. The guy in red notices that I'm taking photos of them working.

6:13 pm
The men have returned, the elder man, standing on my kitchen counter, puts three cigarettes in his mouth, lighting all three and taking a deep drag. He hands one cigarette to each of the men dangling outside my kitchen. Grinding recommences. The elder man screams something indecipherable over and over. It is unclear who, if anyone, he is addressing.

6:21 pm
The elder man says that they've been hitting the shorter cage segments first, before finishing up with the longest segment. He then continues on in much heavier dialect, exhaling smoke. I furrow my brow and pretend to understand before grunting in agreement.

6:23 pm
The elder man says something in dialect that I can't understand. Laughing, he walks out of my apartment. The two younger men outside the window remove the penultimate cage segment. The end is in sight.

6:33 pm
The men are repositioned and are hitting the home stretch. All three are grinding away in different spots, sparks flying in multiple directions. 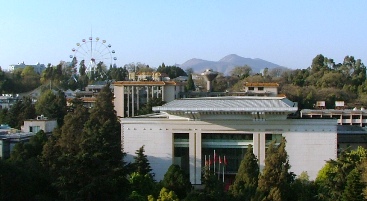 6:39 pm
I am called into the kitchen by the elder man. He informs me that it's okay to close my windows now - they've finished their work. Before I can snap a final shot, the largest segment of cage outside my apartment is lowered away. I say goodbye to the elder of the three, who has already left my apartment. I turn my head just as the two younger men drop out of sight, yelling up at their coworker on the building's roof. Contemplating the sinkful of dirty dishes, I once again feel thirsty.

Chris; Now, living away from Kunming, your story is a joy. Will you, now, relocate your office back to the apartment with the fantastic new view. Which reminds me of the saying, "A writer is working his hardest when staring out the window".
Kunming will be totally renovated with the removal of the 'cages'. I look forward to seeing the result.
My only fear is that landlords will reinstall things back inside the window.
By the way, who gets the financial compensation - there's a fortune in metal there.

Wow. I am jealous of your view.

"After contemplating a sinkful of dirty dishes in need of attention, I decide to head down the street for a beer in the sunshine" 呵呵

a fantastic read. thanks for writing!

I filmed the process at my home: blog.luofei.org/archives/1894

I like the cages. They make handy places to put things out to dry. Buy fresh walnuts, put them out in a basket in the cage and they dry quick. Anywhere else, slow.

Do you think the cage smashers have some pretty good connections with the Kunming city government? They get paid to tear down the old cages and then get paid again to install the new jail bars. Really seems like a racket to me. Lots of money to be made on this deal!

glad to read the story