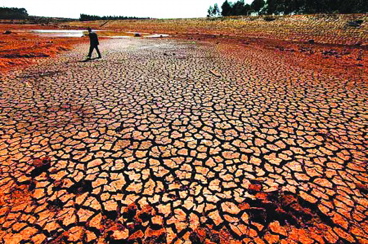 Yunnan drought damage intensifying
The rain and snow that fell across northern Yunnan last week was not nearly enough to relieve the record drought that has left Yunnan with countless water shortages, forest fires, and failed crops. Government projections now have the drought lasting into early summer.

The drought is now also affecting shipping traffic on the Mekong River.

After years of Chinese civil engineering projects such as dredging channels and blasting shoals, the upper Mekong River, known in Yunnan as the Lancang River, has become a major freight conduit between China, Laos, and Thailand, carrying oil shipments and other cargo up and down the river.

Reuters is reporting that the river is at half of its usual level for this time of year and China has halted the operation of 21 Chinese boats and stopped issuing border crossing permits to cargo boats seeking to enter China from the south.

Additionally, the drought has hit Yunnan and neighboring Guangxi's sugar farmers hard, leading to a 12 percent decrease in national sugar production for this growing season compared to last year. This development could drive up national prices if China begins to import more sugar.

Kunming apartment rents rising fast
If it seems that your landlord is trying to bleed you dry when you re-sign your lease this year, you might take consolation in the fact that other renters across Kunming are being similarly squeezed.

According to a Xinhua Net article, rental prices for small-sized family dwellings in the downtown area have increased by 10 to 15 percent in recent weeks as a surge of outside workers return to Kunming from Spring Festival vacations and a new crop of college graduates begins to flood the rental market.

The increase comes on the heels of rising prices last year.

The article focuses on the breakneck pace of residential construction in Chenggong, which for the moment is home to row upon row of mostly uninhabited apartment blocks and other buildings.

Kunming, however, has a rapidly growing population and very little space remaining around the original city center. With government offices and universities preparing to relocate there, it is difficult to imagine Chenggong remaining a ghost town for long.

considering the drought and the problems it's bringing, it seems strange (to say the least) that i couldn't play football on the pitch belonging to Yunnan Nationalities University yesterday because the six constantly running hoses had all but waterlogged half of it. As i walked back up yieryi da jie i noticed that the workers at Yunda were also hard at it... watering trees around a car park. i really don't know what to make of this behaviour. to label it retarded, stupid or even short-sighted would be too easy.

I think the shortage of water is of usable water. I've heard that Dianchi lake is so bad that they can't even use the water for industrial usage. So I'm guessing, or at least hoping the water they use is ok for grass, but not for drinking... probably sewage water.

i saw roadside trees being hosed with water yesterday. i also smelt it, so it seems Ouyang is on to something.