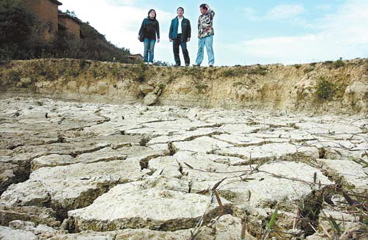 The light sprinkling of rain that fell on Kunming yesterday did little to stem the record drought conditions in Yunnan that have led to widespread economic losses and water shortages.

Yunnan news outlets are reporting today that since July of last year the average rainfall across the province has been about 512 millimeters. This amount of rain is about 207 millimeters less than average—a shortfall of almost 30 percent.

During the same period, average air temperatures have been about 1.7 degrees Celsius higher than normal, leading to increased evaporation and further exacerbation of drought conditions.

In addition to record low rainfall, Yunnan is also experiencing record high temperatures, according to a Yunnan Net article about the drought.

According to today's reports, the Provincial Flood Control and Drought Relief Headquarters declared a level-two drought emergency yesterday—though it is not immediately clear how many levels of drought emergency exist. Additionally today, some China Mobile users received an SMS warning them of a drought "red alert".

The immediate result of the drought has been widespread lack of drinking water in areas that do not have developed municipal drinking water systems. Those threatened with drinking water shortages include more than half a million people living in the villages and towns surrounding Kunming. In addition, direct economic losses have been estimated at 272 million yuan (US$39.8 million), mostly in crop damages.

The provincial government is reported to have been dabbling in the murky science of cloud seeding, but yesterday's rain, which was strongest in the north and west of the province with the city of Tengchong receiving nine hours of sustained rainfall, was reported to be natural.

Other than increasing spending on emergency water distribution and stepping up efforts to prevent fires in the province's parched forests, it is unclear what more the provincial government can do other than wait and hope for a robust rainy season, which usually begins in late May to early June.

The Kunming weather report through the weekend calls for clear skies and temperatures in the low 20's Celsius.

Update: Kunming mayor Zhang Zulin announced on January 27 that the city government would release eight million yuan in emergency funding to provide relief for drought-stricken areas of Kunming. The money is intended to maintain access to drinking water and mitigate damage to the spring crop planting until the rainy season begins in late May.