With the dry, sunny weather of Yunnan's winter calling us out of the office, GoKunming took a few days off to cycle south to the Vietnam border. Using Guo Duomi's post from earlier in the year as a guide, we planned a route through Tonghai, Jianshui and Yuanyang to the border town of Hekou.

Day Three: Relish The Descent - Jianshui to Yuanyang
After reading in Guo Duomi's post that we faced "almost 35km of constant climbing" at the start of the day, we were a little scared as we rolled out of Jianshui at around 10am. The town lies a little off the highway, and we covered around 5km getting back onto the S214 at the 175km distance marker. 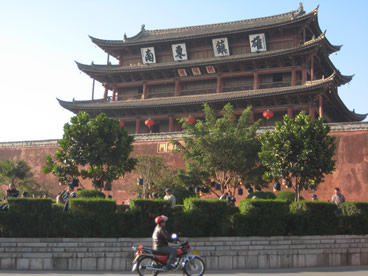 Things were not as bad as Guo made out. There's a 4km climb shortly after you've left town, but then it's pretty much smooth sailing on flat/gradual descent until around the 190km distance marker. Then, there's a 3km climb, followed by a 3km descent, and then the main event begins: a challenging climb of around 8km which tops out at around 1900m above sea level. 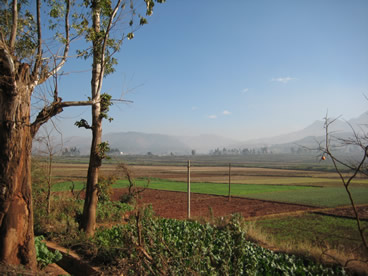 At this point, you're basically done for the day, as Yuanyang's new town, which is also known as Nansha (南沙) lies on the Yuan River (元江) at an elevation of around 240m. In other words, mad descending awaits. We shot down smooth roads into the aptly named town of Potou (坡头, slope head) past crowds of waving children, immediately sensing a change in weather and agriculture. A quick lunch in Potou and then we were back into the descent. 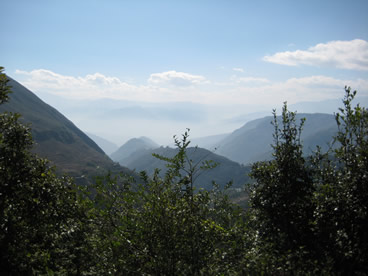 The roads are somewhat worn, with patches of unsurfaced road, but nothing a mountain bike and a bit of careful riding couldn't handle. The descent ends with a few switchbacks which drop you out onto a gravel road running alongside the reservoir formed by the dammed Yuan River. We crossed the bridge and headed into Nansha to find a place to stay and some food. 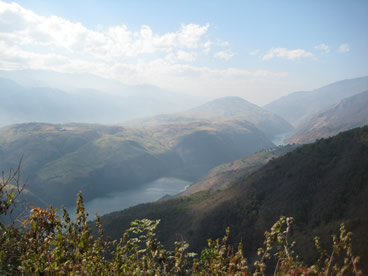 Yuanyang is two towns - Nansha lies on the river, but old Yuanyang, which is famous for its picturesque rice terraces, lies high up on the hillside. Nansha is small and laid out on a simple grid. The low altitude means it's several degrees warmer than Kunming at this time of year.

Day Four: Maintaining Efficiency - Yuanyang to Hekou
By now, we'd covered approximately 220km over three days, so you'd think we might make the fourth day easy on ourselves. We didn't. The plan for the final day was to ride 160km downstream alongside the Yuan River to the border town of Hekou. Elevation was going to be less relevant today, as the road only deviates from the river a couple of times, so major climbs weren't going to slow us up. Our concerns were road surface quality and headwind. We figured that if we managed an average of 20km/h, we'd still be looking at 8 hours in the saddle.

It's a ride for time triallists or triathletes: the goal being to maintain a solid effort efficiently for a full day, without cracking. On our side we had an oxygen-rich low-altitude atmosphere and large helpings of obstinacy.

We pulled out of Nansha at around 8:45am, hoping to chomp as many Ks as we could before the headwind got up. We crossed back over the bridge to the north side of the river and turned right for the straight shot towards Hekou. After around 15km, we turned off the Gejiu road and onto the X102, which stays alongside the river. At 42km down, you'll see a bridge. There's a bit of a climb here, up to the bustling town of Huangcaoba (黄草坝). 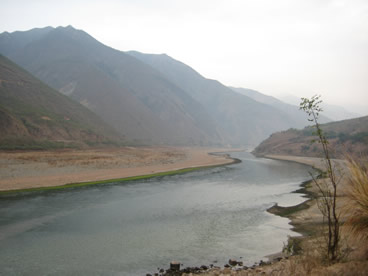 After Huangcaoba, you'll notice new distance markers, as you're now on the S212, at the 90km marker. Here we encountered worsening road surface, which brought us well below our target pace. At around 55km down, we found the reason: a dam is being constructed across the Yuan River, and the heavy truck traffic has damaged the surface. Once we'd passed the construction zone, via a 2km inland diversion, the road improved, but we were feeling behind schedule. Time to push the button.

At the town of Manhao (蔓耗镇) the road reverts back to X102 while the S212 crosses a bridge to the south side of the river. The X102 mileposts are reset to zero. 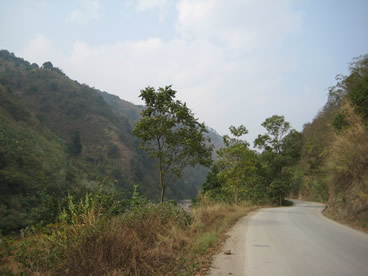 At Xinjie (新街), which is also known as Lianhuatan (莲花滩), there's a passport check. Expect a few simple questions from the police officers manning the checkpoint. They offered us a refill of our water bottles as we chomped on chocolate.

The road markers change again here, as we're now on G226 at the 1451km marker. Hekou's still nearly 70km away, but the police tell us the road is good, and we get to it.

The road is becoming more level, but it's still undulating gently, with low 'Tarzan' hills - if you time your pedaling right, you can use the momentum from a descent to help you up the next ascent. The G226 road has low traffic, mainly motorbikes, because above us is the massive GZ40 4-lane highway bearing the bulk of the region's traffic. 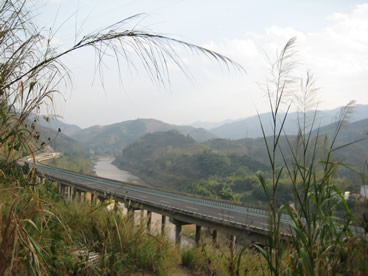 We keep pushing, but at another roadside passport check near Basa (坝洒), it's becoming clear we're not going to make into Hekou in daylight. We end the ride in darkness, grateful to arrive on the well-lit riverside road into the town. We ride all the way through town to the border post, where we find a guesthouse near the bus station. We clock 162km in 8hr 20min of riding, and close the day with cold beers at a riverside stall, while gazing over the river to Vietnam.

There are direct buses from Hekou to Kunming that can carry bicycles in the luggage space. Expect to pay 120 yuan or so, plus a fee for your bike.

Thanks for the post Math... I'm looking forward to doing the ride myself next month! I'll take notes from your post to not get lost. ;)

Thanks heaps for this post it was really helpful for planning our cycling route from Kunming to the Vietnam border a few weeks back.

This was a really nice ride and we really enjoyed the changing scenery along the route. The drop down from 1900m to around 200m was a particular highlight with great views of the rice terraces along the way.

For anybody else considering this route on a fully loaded touring bike (like we had) some details of our experience are here: