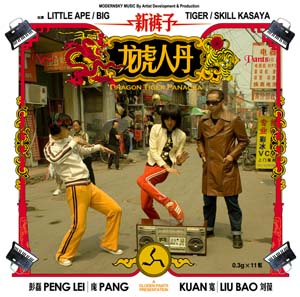 This week in Kunming there are several live music options, which is nice.

From Wednesday to Friday, Lijiang Studio artist Krisgatha will present an art show named SPACE.ATHORN CITYxPLORATION NO. 1 at Shelter Bar. The show will include sound, visual, video, installation. Admission is free, and the musical portion of each day will begin at 11:00 pm.

Thursday, the Beijing band New Pants will perform at Speakeasy Bar to support the release of their new album. New Pants formed in 1996 and it has been with the famous Chinese indie label Modern Sky since then.

New Pants used to be a punk band but this time the band has a different sound on its new album Dragon Tiger Panacea which the band calls "retro-disco" - disco music in the style of the 80s. Together with the music disc, the album also includes a DVD with several music videos and documentaries. The album feels like a parody version of the 80s cheesy disco in China. The show starts at 9:30 and the ticket is 25 yuan, which includes a soft drink. Note: The first 30 who arrive there can get a bonus CD.