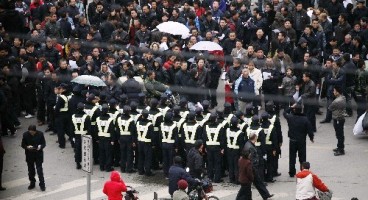 Hundreds of angry shop owners brought traffic on Huancheng Nan Lu to a standstill Saturday morning to protest the pending demolition of Luosiwan market, according to a ChinaNews.com.cn report.

At the height of the disorder, a car was smashed and rocks were thrown at police by shop owners who were eventually dispersed with tear gas. Police instructed the protesters to air their grievances with a group of government officials that had been sent hastily to Wuhua Stadium.

Protestors told reporters that they were demanding compensation for shops they had bought in an auction in 2006 at an average cost of two million yuan. The market's property rights are owned by a group of more than twenty shareholders representing investment from mainland China, Hong Kong and Taiwan.

Luosiwan is the largest comprehensive wholesale market in Yunnan province. With average foot traffic of 100,000 visits daily and more than 10,000 vendors, it does roughly 10 billion yuan in business annually. It is one of the 10 largest markets in China.

"The government is forcing us to demolish, yet we're not getting compensated," one shop owner who purchased his shop three years ago said.

A new Luosiwan market is currently being built southeast of downtown Kunming on the way to Chenggong. The new market - a small section of which is already open - will be several times larger than its predecessor and will have its own hotel attached to it.

Half-way to Cheng Gong is not very convenient for ordinary Kunming people. Do the planners assume everyone has a car?

they don't? looking at the traffic you'd think they were giving them away...

the new market will be on the light rail line, methinks

New light rail? Sort of an El? I'll believe it when I see it. More highways for cars are the most apparent priority.

the light rail line construction is coming along fast over there (caiyun bei lu), with a lot of elevated platform in place, but no rails yet. the new Luosiwan market is right next to the line. the south bus station (currently a temporary structure) is over there too.

Yes, the sky train is certainly being built... and quickly I might add. Plus, the new LuoSiwan is in a cleaner more open environment. That area is far from downtown, but a lot of people already live close to the new location and there are MANY living communities being built close by. Plus it is right next to the bus station.