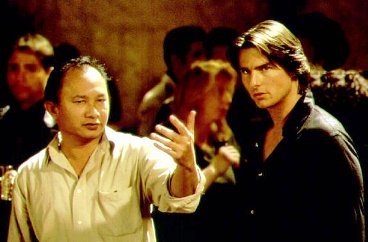 John Woo's upcoming film about the Flying Tigers in Yunnan will star Tom Cruise, reuniting the Mission: Impossible II director and star, according to a report in Variety.

In July, Hong Kong action director Woo signed on to direct the movie, which will be called Flying Tiger Heroes (飞虎群英) in Chinese. With a projected budget of US$100 million, it will be the most expensive movie ever made in China.

At the Beijing press conference where Woo was named director of the film project, it was announced that filming would begin before the end of this year. Woo said the film will contain the most spectacular aerial battle scenes ever seen in Chinese cinema.

He added that the movie would highlight the spirit of Yunnan culture as well as Chinese heroes from World War II and the US-China friendship that led to the founding of the Flying Tigers.

Hollywood blog Rope of Silicon is reporting that Tom Cruise and scriptwriter Chris McQuarrie (Valkyrie, The Usual Suspects) were attached to the project as early as December 2008.

The Flying Tigers were a group of American pilots who helped China with its war of resistance against Japan before the US officially entered World War II. It is believed that Cruise will play the part of Claire Lee Chennault, the commander of the Flying Tigers, who is one of the most respected foreign military figures in China.

"This is an extremely important production," Woo said at the signing ceremony in July. "This Yunnan-themed film emphasizes China-US friendship and the contributions of the Flying Tigers and the people of Yunnan during the War of Resistance."

Update: It appears that the Variety article may have been jumping the gun on Cruise appearing in Woo's film, according to cinematical.com. Thanks to Colin Flahive for the tip.

Tom freaking Cruise, I have mixed emotions about this because this is a great story but Cruise and or Woo could destroy it.

Although Woo certainly has the capacity to fxck a movie up Tom Cruise is actually a fairly competent actor (when he is allowed to). Think Magnolia, Collateral and Tropic Thunder. 100 million and the guy who wrote The Usual Suspects ought to get you at least some part of the way to a succes. As long as China's Michael Bay doesn't get to run everything that is.

My fears were a bit assuage until I saw 'china's michael bay' and I vomited a little in my mouth. I thought of Magnolia as well but all of those characters are a slight extension of Cruise's disturbing personality. He might be better suited for General Patton etc.

How will Tom Cruise, China and Scientology fit together ? Do they ?

I think will be a great movie not only for the Chinese people, but for Americans everywhere! The bravery, valor and sacrifice of the Chinese and the Flying Tigers was magnificent. The world needs to know the story of heroes, "Flying Tiger Heroes"!

www.avglivinghistorygroup.com is a great website of a group who dress in period outfits to honor the Flying Tigers at events and Flying Tiger tributes!

My husband, Larry M. Pistole is the author of The Pictorial History of the Flying Tigers, published in 1981 and had the worlds largest collection of Flying Tiger memorabilia as a result of his research on the book. His contact info is:

I am a member of a AVG reenacting group In Calif. Unlike other reenactment group, each member of our group Picks an actural member of the AVG. So this way at show and displays we become the Person we picked, making the history take on a realism because we take the time to study everything we can about our charicter, much like a living Douctumentry. I think John Woo will do a Fantastic job. So Mr. if you need any trained and properly uniformed AVG Flying Tigers there are 9 of us that know our parts Our web site is www.avglivinghistorygroup.com/
We are a member of the California Histroical Group

This is a wonderful opportunity to make a truly great film. Lots of of great story material to work with. Great care needs to be taken with casting or it can be ruined.

For those that may wish to see a video of a restored P-40 Tomahawk fighter plane in flight in Flying Tiger markings look here:

Why John Woo? I don't like his version of Mission Impossible. Hope he's not going to make a mess of this film!

Regarding Theresa Pistole's offer of accuracy for the film from her husband Larry: I wonder if he would begin with an accurate accounting of the items he borrowed from the family members of deceased Flying Tigers. One of those family members was my grandmother, Margaret Armstrong, mother of John D. Armstrong, lst AVG to die in Burma, September 9, 1941.

Regarding the film itself: I wonder who will play the roles of John Armstrong, Pete Atkinson and Maax Hammer, naval and army pilots, respectively? All three were killed in flight accidents prior to Pearl Harbor, buried at St. Luke's cemetery at Toungoo, Burma, forgotten by history and left behind where they currently remain in unmarked graves.