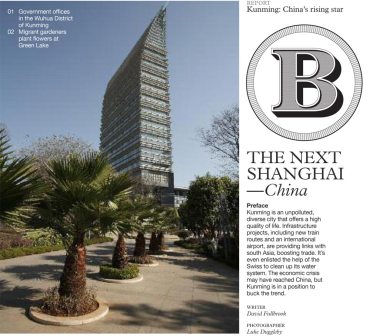 "British Media: Kunming is the next Shanghai" proclaims a story headline today on Kunming Information Hub, the municipal government-owned website charged with being Kunming's face to the world.

In truth, it is not "British media" but one magazine that has made such a claim. The Kunming Information Hub article is a translated story from the March 2009 issue of UK-based magazine Monocle, a self-proclaimed "briefing on global affairs, business, culture & design".

The original business story, written by Bangkok-based Monocle correspondent David Fulbrook and entitled "Kunming: The next Shanghai", is a snapshot of a handful of youngish foreigners doing business in Kunming [disclosure: your correspondent is one of the interviewees].

The feeling that one comes away with after reading the story – other than a Monocle editor having a penchant for sensational story titles - is that Kunming is a city with amazing potential, primarily due to being surrounded by vast resources and having good access to the high-growth economies of China, India and Southeast Asia.

Under the aegis of its current party secretary and Communist Party rock star Qiu He, Kunming has made much progress in improving its traffic, health and education infrastructure while reducing corruption and inefficiency.

Attracting investment from elsewhere in China - and the world - has also been made a priority during Qiu's time in Kunming. Attempts to bring domestic investment to Kunming have been largely successful, with companies in China's more affluent coastal regions agreeing to make substantial investments in the city's future.

Less successful have been the efforts to attract elusive large-scale foreign investment that other southwestern Chinese cities such as Chengdu and Chongqing have been able to land. Even Nanning in Guangxi seems to be challenging Kunming as Southeast Asia's gateway to China.

This begs the question: Why with everything it has going for it does Kunming lag behind other Chinese cities, even in southwest China, as a destination for foreign investment?

A sidebar in the Monocle story that wasn't translated and posted on Kunming Information Hub is its suggested 'fixes' for Kunming. In recent months, much progress has been made on the first suggestion – that Kunming add bilingual street signs so that residents and visitors can navigate the city.

The remaining four tips Monocle offers Kunming are to improve the traffic and taxi situation, stop demolishing historical buildings, work on its image/branding/promotions and also to get better English-language media:

As for what Kunming residents think about the chances of Kunming one day becoming a major city on par with Shanghai, local BBS commenters seem split, with about half considering the story over-the-top Western reporting on China, and the other half hoping that Kunming does become more like Shanghai. In the words of one commenter:

"I hope the people of Kunming can liberate their minds the way the Shanghainese have."

The opening line of the "Profile" in the article abt Kunming being "unpolluted" pretty much strips the article and the Monocle of all credibility whatsoever.

Sadly, I agree. Kunming should wait at least other 20 years or more.

I'm not why I should want Kunming to be another Shanghai. It's fine as it is.

Hopefully Kunming will become an international city one day....but it will take some time. In any case, if Kunming does become like Shanghai or Hanoi, Singapore, Bangkok or other regional cities that are 'international' these days, then I think other major Chinese cities such as Chengdu will also become international too. I don't think that Kunming really stands out compared to any other second tier Chinese cities, though perhaps it could, or even should. Maybe give it ten years and better transport links to the rest of the region...despite increasingly good links, THAI stopped flights between Chiang Mai and Kunming some time ago, although China Eastern now flies this route. The proposed high-speed rail links to Hanoi, Yangon and Vientiane all starting from Kunming promise to make Kunming an important hub in the future, and hopefully also attract more international tourists and investors. Before this happens, maybe the new international airport scheduled to open later this year might also attract renewed interest from regional airlines and increase services from existing ones.

Kunming will never be a Shanghai, but it will be a regional powerhouse due to it's status as gateway into China for the South East. You will see major changes in Kunming in the next 2-3 years due to the tariff free agreement between China and ASEAN.

Kunming can only become a Tier 1 city when it's economy diversifies. We have the trappings of a Tier 1 city (name brand stores, couple of Mercedes/BMW dealers, couple of ferraris on the streets) - but not the balanced economy where sustainable private industry equals or exceeds state owned enterprises.

Whenever I speak to locals (in Chinese) about going abroad or having
been abroad they say that they're not interested in visiting foreign countries, because they can't speak English.

As an English teacher I often see that parents want their kids to speak English, often the pressure at the public schools is so high though, that the kids eventually quit studying English, due to a lack of time. Some kids do learn English properly, but they're still a great minority.

I think the public transport works reasonably well here. I got annoyed today about having to wait a whole half an hour for a bus, until I remembered that's par for the course back in Britain. And to only pay 1-2RMB compared to £1-£2 (10-20RMB) in the UK... woohoo!

When I speak to locals here they seem very keen indeed to visit foriegn countries, even if they can't speak any English. Every year a larger and larger percentage of my students seem to be taking holidays abroad with their families. (Fifteen years ago none of my 150 students had ever been abroad. Not one.)

If you mean and international trade centre for SW China, I think Yunnan has missed the boat. Chongqing was on a par with KMG 6 or 7 years ago. It is now streets ahead. With the global recession, and even China's economic downturn, there are few opportunities to develop a new trading centre in SW China.

I know KMG and YN govt. want it, but I don't think they will get it. For Vietnam/Thailand/Etc. the extra flight time to Chongqing does not add a lot to the total door to door time. And when you get there all the main financial services are needed are already well developed, unlike KMG.
The other issue is how do you staff institutions from a work pool of people with a poor work ethic. Yunnan has never been known to be industrious. Chongqing is a cut-throat business environment, like Shenzhen, Guangzhou and Shanghai. In Yunnan people want easy money, and then kick back and play Mah-jong.