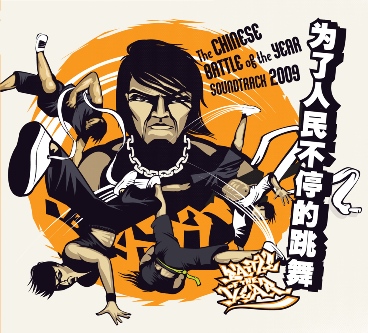 Tonight the Speakeasy Bar will hold a CD release party for the Battle of the Year (BOTY) Soundtrack 2009, which was put together by DJ DSK and Sam Debell of Unity Recordings. In addition to being a CD release party, tonight's do will also be a farewell party for Debell, who has been an integral part of the Kunming music scene for as long as we can remember and is moving to Beijing.

GoKunming chatted with Unity's DSK and Debell about the new CD and tonight's party:

GoKunming: What is the Battle of The Year Soundtrack 2009?

DJ DSK: BOTY is an international B-Boy or break-dance competition held each year in Germany. This year celebrating its 20th anniversary, BOTY has grown to be the biggest international competition of its kind - there are over 30 worldwide eliminations in over 20 countries. The CD is the soundtrack for the Chinese national elimination which was held last weekend in Shanghai.

The CD is a project by Unity Recordings to promote positive hip-hop and funk music in China and also give Chinese artists a chance to reach a worldwide audience and network with artists from other countries. On this year's CD we have funk bands from Kunming, Shanghai and Chengdu, rap from Guangzhou, Aruba and the US, electro from Shenzhen, hip-hop beats from Athens, Bangkok, Qingdao and a lot more.

GK: What difficulties did you encounter while managing such an international project?

Sam Debell: It was very hard to coordinate people in different cities all around China and in six countries and get them all to meet deadlines especially as this is a nonprofit release. Also DJ DSK had many sleepless nights as he had to help record and mix a lot of the songs at the same time as having a baby! The final master CD and drums on one track were finished whilst on a tour, which meant us getting back to the hotel around 3 am and working till daylight. No matter how well you plan there always seems to be a mad rush at the end!

DSK: The biggest difficulty was the same one facing everyone making music today - no one is buying music anymore! Sales of CDs are down everywhere due to people downloading free online. So we really need people to support the project and buy a real copy. The CD is only 25 yuan and it's very difficult for any music artist to survive these days, especially in China, so if you like a Chinese band or artist, please buy their music! 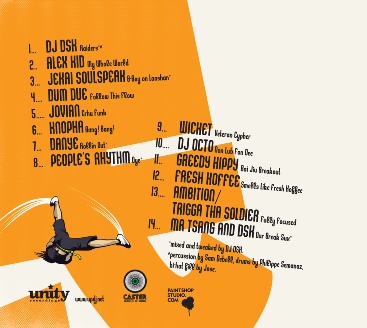 GK: How does the release differ from last year's China BOTY 2008 CD?

DSK: This release has the same basic philosophy and musical style as last year but everything is much more professional this time round. We had all the music mastered in a professional studio in the UK so everything sounds more polished and up to the quality of most commercial releases, we also increased the budget to include a booklet in the CD. The artwork is again provided by famous UK graffiti writer and graphic designer DEP.

GK: What can we expect at the release party tonight?

For the release party we want people to come along and have a fun night to a soundtrack of funk, disco and hip-hop. We really want to show to people the positive side of non-commercial hip-hop and not the rubbish so called rap music you hear in the top 40.

We will also be showing the award winning movie "Planet B-Boy" at 8 pm. This movie is very interesting as it follows B-boy crews from USA, Korea, Japan, France and Canada, showing their lifestyle and what dancing and hip-hop means to them in the context of their own cultures.

Then we will have B-boy cyphers. That means music and live percussion specially for B-boys/B-girls to dance and have fun to. It consists of DJ DSK on two turntables cutting up old funk, soul and Latin breaks along with some classic hip-hop and People's Rhythm adding live African and Latin percussion. Then at 12 we have a 15 minute scratch performance of DMC routines and freestyle scratch set from me, Marco and Echo. At 12:15 DJs will be playing funk and hip-hop to party the rest of the night away. If we have enough time to organize we may also add some live graffiti painting outside from 9 to 10.30.

GK: Can you tell us some more about BOTY China competition and who won?

It was an amazing event held last weekend in Shanghai's Jing'an stadium in which crews from all over China had to perform a six-minute dance routine and then the top four crews entered a knock out championship to decide the winner. Kunming's own B-boy crew KGS came second in the dance routine rating, impressing the international judges with their mix of traditional Yunnan minority dancing and B-Boy moves. Dragon Style from Beijing came first with an impressive show using moves and make up taken from kungfu and opera. KGS made it into the semifinal battle losing to STO from Guangzhou who went on to win BOTY China 2009.

STO will go to Singapore this weekend to enter BOTY Asia along with Thailand, Malaysia, Singapore, Korea, Japan, Taiwan and Indonesia - the top three will then go to the BOTY world finals in Germany in October.

GK: How are you distributing the new CD?

The CD is available in Kunming at Salvadors Coffee House and other CD shops around the area and in the rest of China through the 1973 mail order hip-hop shop.

Also, you can come to the Speak and support the release party - we are giving a free vodka to anyone who buys the CD, which is only 25 kuai. It will also be available in Europe through the official BOTY shop in a week or so - you can check our website for more details.

GK: Will you be releasing another album next year?

DSK: We hope so. It's a lot of work with little financial motivation but it's something we believe in and we will look for more sponsors to help us out. We are currently in talks and hoping that BOTY China or even BOTY Asia can be part of the 2010 Expo in Shanghai. We are always looking for producers or bands, especially Chinese, of suitable music for the next release. So if you or anyone you know thinks they have music that could be on next year's release please contact us!

Sam leaving KM?! what will speakeasy be like without you pal? good luck in BJ!

June 19, 2021 "I own a three-bedroom apartment with two west-style bathrooms, a west-style kitchen and a West-Hill-View balcony. It is nearby Dian Chi and West Hills …"
Living in Kunming livinginchina