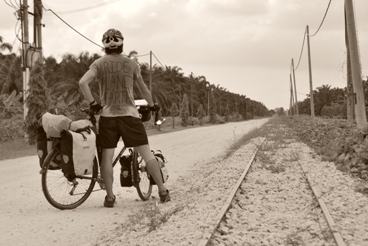 Australian Kim Nguyen began cycling toward Copenhagen from Brisbane on August 10 of last year to raise awareness of the effects of global warming and to bring attention to the UN climate change negotiations that will begin in Copenhagen on December 9 of this year – the day Nguyen plans on arriving in the city. Nguyen has been riding around Yunnan with Kunming as his base over the last few weeks and is preparing to leave.

Nguyen has already cycled more than 7,000 of the 25,000 kilometers he plans on logging during his travels – riding through deserts, volcanoes and rainforests. He is keeping a blog about his journey at www.rideplanetearth.org, which for some reason is blocked in China. GoKunming chatted with him about life on the road and what made him decide to spend 16 months riding toward a conference in Denmark.

GoKunming: When and why did you decide to make the ride from Australia to Denmark?
Kim Nguyen:I decided to make the journey early in 2008, I had heard about the Copenhagen conference and wanted to get there in an environmentally friendly way. The conference is the forum for the most important climate change negotiations in over a decade. In Copenhagen this December the international community will decide on what protocol will follow Kyoto. It is of the utmost importance that the world's governments decide not only on a reduction to a safe level of greenhouse gas emissions but also how to do it. I wanted to get there to help convince the government delegates to take action.

GK: What has been the most rewarding aspect of your travels?
KN: In travelling by bicycle across Australia, Asia, the Middle East and Europe I decided to collect messages from the people I would meet to take with me to Copenhagen to help convince the governments to take action. As such I have met many, many wonderful people with nothing but enthusiasm and support for my journey. I've met many really incredible people during my stay in Kunming and their support has given me the lift I needed to push north onto Mongolia.

The most rewarding things have been when I have been struggling through inhospitable or desolate regions and local people, usually farmers, have taken me in overnight, and given me a warm bed and a friendly smile. Also, it has just been seeing and experiencing so many amazing parts of our beautiful planet. But I am afraid that if we as individuals and our society as a whole cannot make the necessary changes then many of these beautiful places will be lost or irrevocably changed.

GK: What are the biggest challenges you've encountered so far?
KN: The challenges have been many, I have suffered several episodes of heat exhaustion, resulting in two hospital admissions, once in Australia, the other in East Timor. In east Timor I collapsed while cycling and managed to fall face first onto the road, requiring several stitches to patch myself up.

Other challenges include the frequent changes in language and cultures I have had to adapt to, broken bicycle parts, extremes of weather and the battering my body has endured cycling up and down mountains for months on end. 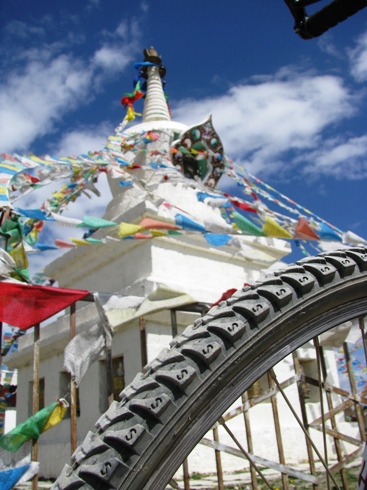 GK: What unexpected surprises have you experienced in your travels?
KN: There's always something surprising, usually some aspect of the local place and culture I had no idea existed. Near Shangri-la I was cycling and found some farmers ploughing their fields with yaks, which was new but to be expected. What was unexpected was that they all used small children to pull the yaks. So ploughing the fields was a family affair.

I was surprised by the amount of tourists swarming over Southeast Asia, in that way coming to China has been a bit more peaceful. But I guess most importantly and sadly I have found that climate change is already hitting many poor farmers in Asia pretty hard. Droughts are unpredictable, rain patterns have settled in and food production has reduced. It's pretty scary.

GK: What are your impressions of Kunming and Yunnan from a cyclist's perspective?
KN: Yunnan is a traveler's dream as far as I'm concerned - so many beautiful mountains and varied landscapes. I could cycle around Yunnan for months and still find something new. The people are as changing as the mountains, the headdress and clothing change every couple of hundred kilometers and so there is always a new culture to find out about.

When I first arrived in Kunming it was a struggle cycling from south to north through the city. I got lost, it was pretty crowded and seemed pretty enormous. But after a few days I found cycling around to be pleasant and easy. Once you get used to the unpredictability of the traffic you can fit right in. And it's great to see so many people on bikes and electric scooters.

Hopefully many of the cyclists join the rides I am organizing on the sixth of December this year as part of the Ride Planet Earth project. This is a chance for people to get out on their bikes, traveling in an environmentally friendly way, and demonstrate the willingness and capacity of ordinary people to take action on climate change. Rides are happening all over the world on this day, the day before the start of the climate change negotiations in Denmark.

In Yunnan there are rides happening in Kunming and Dali so far but we hope there will be even more. People should visit www.rideplanetearth.org, or the facebook group The Ride Planet Earth Challenge to find out the locations of the rides. They can contact me via either website if they'd like to set up another ride somewhere else in Yunnan.

GK: Where are you headed next?
KN: So next I'm heading up into Sichuan and eventually into Mongolia. I have to speed up cause I only have 7 months to get to Copenhagen. Wish me luck!

I have been doing the same thing as Kim Nguyen, but from the reverse direction: The U.S. to China. This for the past four years, three in China.
Please go www.cyclingpeace.org for BLOG and pictures.
And I offer my house in Lijiang to Kim Nguyen, or any other cyclists if t/he/y needs. Contact me at [email protected] for details.
And wishing Kim, 'Jiao,' that the 'wind always be at his back!'
F.A. Hutchison (Xining and Lijiang)
'Haqi' (哈奇)