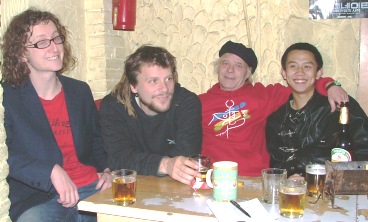 Since playing their first gig two years ago in Lijiang at the Snow Mountain Music Festival, Kunming-based band The Tribal Moons has become one of the pillars of the city's live music community. Sometimes playing as long as three hours, the band is known as much for its stamina as it is for raucous performances in which its members frequently switch instruments and roles.

GoKunming sat down with the Tribal Moons after practice in a smoky corner of a Wenlin Jie bar earlier this week to find out more about what makes the band tick, plus what to expect at this weekend's Dali Rock Festival, where they will be the headline act.

GoKunming: For people who haven't heard your music, how would you describe it?

GK: What makes the Tribal Moons different from other bands?

JP: We're all different ages and from different places, so we have something for everyone – local kids love Ma Tu and the grannies love John.
John: This is a jingjiu band, not a baijiu band.

GK: You've toured extensively in Yunnan and southern China over the last two years, what have been some of your favorite places to play?

JP: We played a bikini contest at Club Nice in Kundu once, it wasn't the best show, but it was the best aftershow.
Ma Tu: We played a show in Deqin where we had to take a thousand kilograms of equipment up a mountain in a bus... that was fun.
Da Ma Ke: Those amps didn't make it back.
John: The Snow Mountain Festival two years ago – it really had the flavor of a festival... The Little Bar in Chengdu has the best sound... Playing the Jah Bar in Chengdu is serious fucking fun.

GK: What's the strangest thing that's ever happened while touring that we can write about in this interview?

Ma Tu: When we were in Changsha, the taxi drove off with our bass... then some guy just gave us his bass. 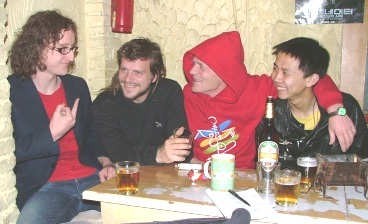 GK: You're headlining the Dali Rock Festival this weekend and have played extensively in Dali before – what's the best thing about playing in Dali?

GK: What's it like playing gigs around China as a foreigner?

GK: Ma Tu, what's it like to play with this particular group of laowai?

GK: Your shows are mostly original material – who writes your songs?

GK: How long is the average Tribal Moons show?
JP: We play anywhere between an hour and three and a half hours.

John: We're a mad band – we play a lot of music.
JP: I like the power sets.
John: The kids like the sprint – I like the marathon!

GK: What should concertgoers expect from your shows this weekend?

John: Friday and Saturday we'll play different sets – Friday will be a rock set, Saturday will be more varied. It'll almost all be original material.

Tribal Moons will play this weekend's Dali Rock Festival beginning at 10:00 on Friday night and 8:00 Saturday night. Da Ma Ke will also be a featured DJ. For information on booking the Tribal Moons, contact manager Brian K at 15925216452.

Miss you all guys!!! See you all in June. Keep Rockin in Free World!!

who the hell is jacques leblanc? is it that pink-hair punk kid?
folks, keep rockin'! stop giving nonsense interviews. don't want ya getting comercial.

are the moons all single?