By Chris Horton in Features on November 1, 2006 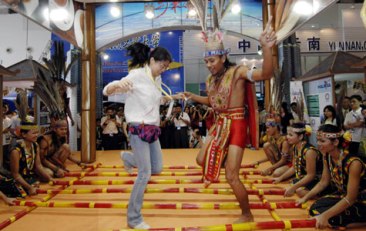 Dancing in Nanning: China and ASEAN

It's been a busy week in the courtship between China and the Association of Southeast Asian Nations (ASEAN). Malaysia announced that it is donating used rail tracks worth more than US$2 million to Cambodia to expedite completion of a China-ASEAN railway network that will connect Kunming with Singapore.

On Monday the first shipment of tracks left Malaysia for northwest Cambodia, where they will be used to fill in a 48-kilometer (30 mile) stretch of missing rails.

The US$15 billion rail network will cover 5,000 kilometers (3,000 miles) and will connect Kunming to cities and towns in Myanmar, Laos, Vietnam, Cambodia, Thailand and Malaysia, as well as to Singapore. The project is expected to be completed by 2015, by which time China and all the members of ASEAN will have entered the China-ASEAN Free Trade Area. With 1.8 billion people the FTA will be the world's largest economic bloc in terms of population.

Meanwhile, in neighboring Guangxi Zhuang Autonomous Region, the China-ASEAN Business and Investment Summit was held in the capital city of Nanning. Trade between China and ASEAN member countries, which also include Brunei, Indonesia and the Philippines has been growing more than 20 percent annually since 1991.

One of the major announcements at the summit was a plan for US$5 billion in preferential loans by the Chinese government to assist Chinese enterprises in establishing joint venture operations in ASEAN states.

China-ASEAN trade in 2005 totaled US$13 billion. At the Nanning summit, Chinese Premier Wen Jiabao said he expected trade volume between China and ASEAN to reach as much as US$200 billion by 2010.