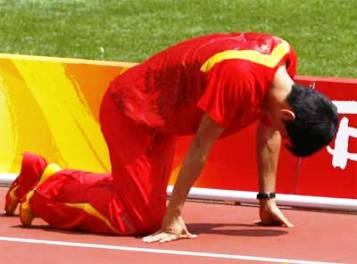 For Chinese fans, they were, without a doubt, the three most anticipated events of the 2008 Olympics: the opening ceremony, Yao Ming and the men's basketball team's showdown with Team USA, and Liu Xiang's (刘翔) defense of his Olympic gold in the 110-meter hurdles.

Now the third one won't happen, as Liu—world record holder until a couple of months ago—withdrew from his preliminary heat this morning in the Bird's Nest. Liu showed up to the race, but he looked far from ready, grimacing and hobbling through warm-ups. He took his mark with the other competitors on the track. But after another runner false started, the injured hurdler tore off his numbers and turned to walk away from the race.

It was known that Liu spent the summer battling a bum hamstring. His coach, Sun Haiping, said in a news conference today that Liu also had a several years-old injury in to his achilles tendon that became more serious recently. Unable to hold back tears, Sun spoke of Liu's dedication to the sport and the pain he had struggled with in recent weeks. Asked whether Liu had known before today's event that he would not compete, the coach gave a rambling reply that ultimately didn't address the question. Sun had said three weeks ago that Liu was still not perfectly healthy but had run a strong 13.18.

The last time Liu raced was in late May at the Good Luck Beijing Athletics Open. He breezed to victory in an Olympic test event in the Bird's Nest. On June 2, Liu dropped out of the Reebok Grand Prix in New York, citing a tight hamstring. The following week, he was disqualified from the Prefontaine Classic in Oregon for a double false start.

The importance of Liu to these Olympics, Chinese sports in general and many Chinese people on a personal level cannot be overstated. He was the first Chinese male to win track and field gold. His face is ubiquitous on billboards and magazine covers from Beijing to Chengdu, and he is the country's top-earning athlete after Yao Ming.

Newspaper columnist Raymond Zhou of China Daily had compared Liu's run at gold to Barack Obama's run for the U.S. presidency. Zhou told China Sports Today before the games began, "We Chinese often convince ourselves that Chinese, and Asians in general, are not good at track and field. If Liu Xiang can consistently break that stereotype, it gives people hope that Asians can compete."

The pressure Liu was under was tremendous, and it can be seen in the reactions shown on TV today. Sun wasn't the only person shedding tears. CCTV showed shots of many in the crowd at the stadium who were visibly moved by Liu's collapse, and the state television station's commentators seemed to be barely containing their emotion when delivering the news.

September 17, 2021 "I have been specializing in teaching The TOEFL Exam for over 10 years, and I can help you Achieve Excellence On The TOEFL Exam. Only for serious st …"
Living in Kunming tigertigerathome