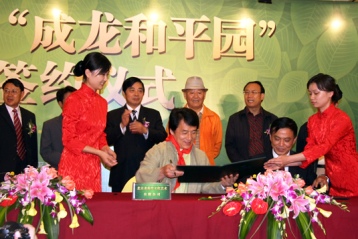 Hong Kong film star Jackie Chan (成龙) was in Anning this past weekend, where he signed a framework agreement with the Anning government for a project entitled "Jackie Chan Peace Garden" (成龙和平园), which will be located in Anning's Taiping New Area.

"I've been thinking of this concept for many years," Chan told an audience which included top municipal and provincial officials. "Today it has finally been realized."

According to Kunming media reports, Chan said he has long wanted to create a "peace garden" that promotes peace and environmental awareness on the mainland. Additionally, he envisions the garden as a base for charitable and philanthropic events.

Chan said that the peace garden idea was shelved because potential partners on the project were only thinking about how to use his name for their own personal gain. He started visiting Yunnan scouting for sites for the project at the urging of a good friend, he said. In the end, he decided on Anning's Taiping New Area, 20 kilometers southwest of Kunming, as the site for the first Jackie Chan Peace Garden.

"Not only do we want to build China's first tree-planting and environmental protection garden, there's also the chance that here we will hold benefits and beauty pageants here as well as television and film events," Chan added.

In addition to outdoor garden space, the 300-mu (20-hectare) Jackie Chan Peace Garden will feature a Jackie Chan museum and a stadium for events. According to the official Jackie Chan website, no dates have been set for the start of construction or the opening.