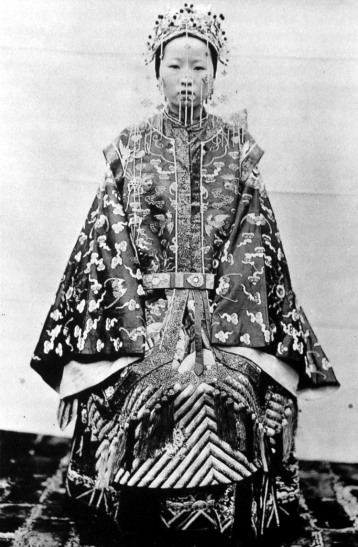 Background:
The woman in this photo by Auguste François is believed to be around 16 years old and is likely the fiancée of wealthy Kunming banker Wang Zhi's second son. Her facial features are in line with what was popular in that day – a round face, small mouth and single-edged eylids (单眼皮). Her eyebrows have been plucked – most likely by entwining them with string and then ripping the hairs out.

A close look at her clothing elicits some interesting details. Her chest is covered with embroidered bats and her sleeves embroidered butterflies. In Chinese the character for fortune is 福, pronounced fú - both the bats and butterflies are symbols used in hope of bringing good fortune. 'Bat' in Chinese is bīanfú (蝙蝠), and butterfly is húdíe (蝴蝶), which pronounced in the Kunming dialect sounds like 'fúdíe'. 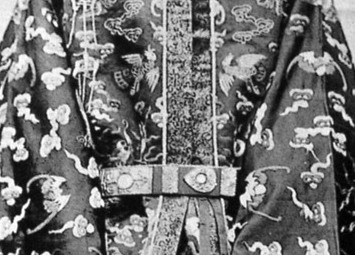 The bride-to-be's lower layer of clothing is typical of Guizhou nobility 100 years ago, suggesting that the marriage was arranged between two powerful families.

someone still alive in kunming's got to know who that is ...