China coping with its third major disaster of 2008 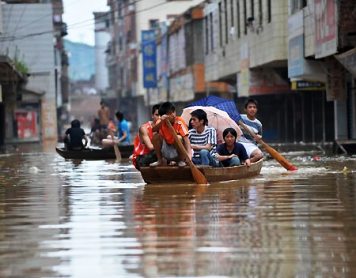 First came the great winter storm of 2008, then the devastating Wenchuan earthquake, whose official death toll now stands at nearly 70,000. Now China is coping with its third major natural disaster of the year as heavy rains and floods batter the country's south.

Continuing heavy rains in Yunnan and across southern China since June 6 have led to 57 deaths and 1.27 million people fleeing their homes, with more rain expected throughout the region over the coming days. According to Xinhua reports more than 17 million people have been affected by the flooding with more than 10.6 billion yuan (US$1.5 billion) in damage incurred so far.

The rains have led to the swelling of rivers in China's south, with key manufacturing province Guangdong experiencing its worst flooding in 50 years. On Monday, Guangdong's provincial flood control bureau ordered local governments in Guangzhou and eight other cities to reinforce river embankments and make evacuation preparations.

Although damage in Yunnan has been relatively light compared to Guangdong and other lower-lying areas including Jiangxi, Guizhou and Hunan provinces and Guangxi Zhuang Autonomous Region, rains here are a major concern as many of the flooding rivers – including Guangdong's Pearl River – have their headwaters in Yunnan.

China's National Meteorological Center is forecasting more rains in southern parts of the country - including Yunnan - over the next few days.