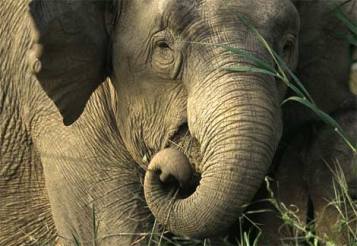 In addition to sharing a border – and the Mekong River – with Laos, Yunnan province also shares China's last herd of Asian elephants, which in recent years has dwindled to only 400 elephants. The herd lives in nature reserves near the border between China and Laos.

This week the Yunnan Provincial Forestry Department met with their counterparts from Laos in Xishuangbanna Dai Autonomous Prefecture to discuss ways to protect the endangered Asian elephant, which falls under China's grade-one protection for endangered animal species.

The representatives from China and Laos reached four major agreements:

1. To educate villagers about how to protect elephants
2. To tighten hunting gun controls

3. To draft a plan for cross-border elephant protection and apply for international funds, and
4. To plan next year's annual meeting in Laos

There are roughly 30,000 Asian elephants left in South and Southeast Asia. Asian elephants average 3.2 meters in height and more than five tons. The animals spend most of their days looking for food, understandable considering that they require around 300 kilograms of it each day.

Although it is less populated than other parts of China, Xishuangbanna is still feeling the impact of China's rapid economic development. Elephants, normally docile creatures, are known to attack when feeling encroached upon by humans. In the last few weeks, there have been two elephant attacks upon humans in Xishuangbanna.

In January, American tourist Jeremy Allen McGill was seriously injured by an elephant attack which left him with eight broken bones and injuries to his lungs, stomach and intestines. Weeks later another elephant attack ended in fatality when on the night of Chinese New Year an elephant in Xishuangbanna attacked and killed Zeng Shaoping as he returned from holiday festivities.