Kunming, the City of Flowers, is host to people of many different nationalities and ethnicities. How do they share their own cultures, and what have they learned from Chinese culture or hope to influence? How does crossing cultures impact their creative work, their plans and their dreams?

For the first ever PechaKucha Night in Kunming, on Friday, July 26, CloudBridge — Media by Design, has put together a program of international creatives from different disciplines who will share their creative visions and try and answer these questions. Come and be inspired! There will also be a healthy variety of libations graciously provided by Wooden Paradise on offer, as well as plenty of time before, during and after the talks to mingle and share ideas in the informal setting of the Elephant Art Center.

Mamur Ahsan Mahtab, from Bangladesh, graduated with honors from the Fine Arts Institute of the University of Chittagong in 2011. During his studies, he participated in various exhibitions in his home country and abroad. He has taken part in master classes on drawing, Mithila — or Nepalese folk art — script writing, woodcutting, water color and serigraphy. In 2014 Mamur moved to China, and continued his art education at Yunnan Arts University. Recently his first solo exhibition opened at the Wake Cultural Center. It is entitled In me, past, present, future meet. The exhibition will be on show until August 30.

Maya Wen (文小诺 ) is from Kunming and graduated with a degree in fine arts. After finishing her studies, she spent three years working as a professional before returning to the art industry. In 2016, she began to make films, hold exhibitions and perform concerts. In 2018 she founded the Wake Cultural Center together with her team. The collective is committed to becoming an artist community and urban art service provider.

David Lingerak is from the Netherlands and now based in Shanghai. He is a creative director and made a one-hour documentary called Urbanisation in China in 2010. The film is about how Chinese citizens experience the quick changes in their surroundings. Apart from making documentaries, he has produced more than 300 car racing video's all over Asia for Sportauto and brands including Audi, Red Bull and Porsche.

Efat Razowana Reya, from Bangladesh, holds a BA in Fine Arts and a Masters Degree in Fine Arts in printmaking, both from Dhaka University. She is currently continuing her arts education in New Media at the Yunnan Arts University in Kunming. Her multidisciplinary art practices are inspired by exploring the local and global context of modernity and post-modernity in terms of her own experience, place and history. She has explored several ways of expression through print, installations, performance and video art. Efat has also participated in many group exhibitions, workshops and site-specific art projects.

Ming Fengxian (明奉贤) is from Kunming and the founder of the CCG design company. He is a young architect and interior designer who is passionate about national architectural culture. In his 14 years of experience he has continuously studied and explored the art of ethnic minority architecture. In the face of the continual loss of national architectural culture, Ming Fengxian has been active in projects protecting the heritage in minoirty dominated areas.

From the respect of traditional construction methods to the use of materials, he aims to persuade investors to increase their focus of cultural characteristics and explains to owners the importance of cultural protection. His architectural design works can be found all over Yunnan. At the same time, he has introduced international diversified design concepts to local Yunnan designs, and cooperated with international design teams on several Yunnan projects. A national cultural project realized by Ming Fengxian was highlighted in an international design competition and has won various design awards. A series of awards has proved the recognition of Yunnan national culture on the international stage, while also proving the value to investors.

Adam Roberts from the UK has a traditional background in Animation Production, complemented with self-study, traveling the world, advising and creating artwork for many companies and clients within the realms of animation, film, gaming and events. As a designer and illustrator he is a visually optimistic content creator. His media are drawing, painting, cinematic and conceptual thinking and graphic design. His traveling mindset is adventurous, and passion and dedication enable him to mix both his love of creativity and exploring the world, all the while culturing himself and adapting to many new life experiences. "The creative life is a journey" and mine is full of color!

Have you ever been to a meeting, a conference or a class, and found yourself nodding off as the speakers work their way through endless powerpoint presentations filled with dense text they then proceeded to read verbatim from the lectern?

This happened one too many times to Astrid Klein and Mark Dytham of Klein Dytham architecture in Tokyo. This is because architects talk too much! Give a microphone and some images to an architect — or most creative people for that matter — and they'll go on forever. Give PowerPoint to anyone else and they have the same problem.

This is why Klein and Dytham devised the PechaKucha format. The first PechaKucha Night was held in Tokyo in their gallery/lounge/bar/club/creative kitchen, SuperDeluxe, in 2003. Since then, the concept it has spread across the globe, and PechaKucha Nights are now regularly organized in 1,000 cities all over the world.

Come join us for the PechaKucha, Cross Pollination, June 26

We hope you will join us for Kunming's first ever PechaKucha on July 26 at Elephant Art Center. The event begins at 7:30pm and will wrap up around 10 or 10:30pm. Entry is just 20 yuan. Because of the brevity of each presentation, English and Chinese will be used, both without translation. Advance tickets are available online here. Tell your friends and see you there! 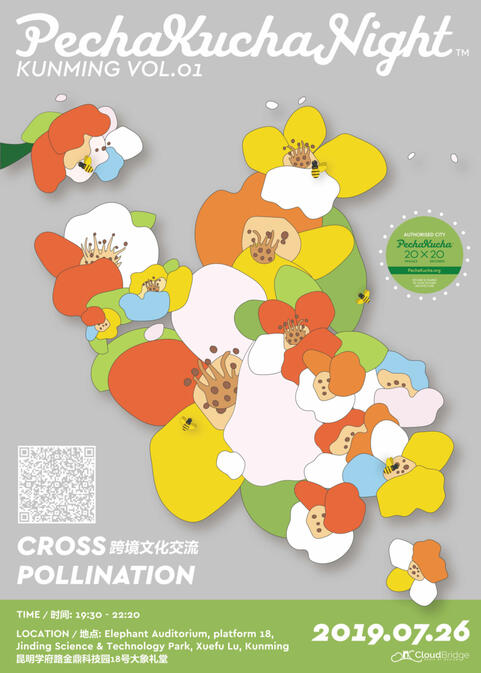 Like exotic flowers in a garden. Thank you Vera.

We're selling out, so if you'd like to attend please book your tickets now and make sure you have a seat

Good luck to all presenters tonight. Enjoy each other's presence, as one.

Online ticket sales is now closed. There will be a few tickets available at the door tonight. We will record the event and share the video after.