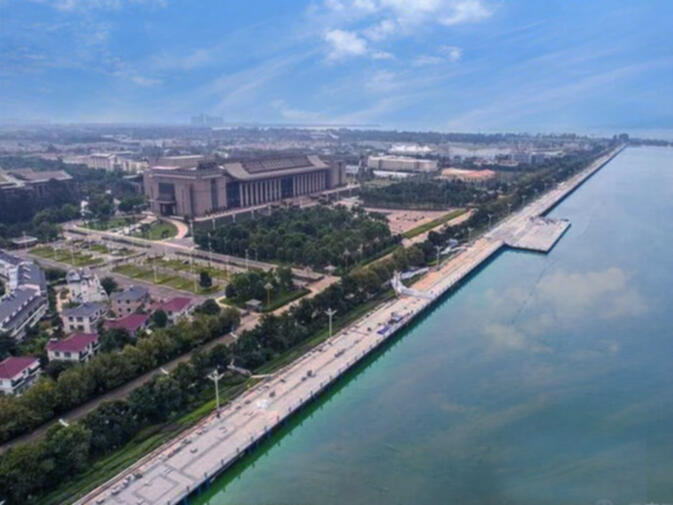 Originally slated for completion at the end of October, upgrades to Haigeng Dam (海埂大坝) are now expected to wrap up by September 30. Yunnan Television is reporting that the renovation work has hit its final "sprint to the finish", and all that remains to be completed are "small cosmetic touch-ups". Unfortunately, it remains unclear if the attraction will be open to the public in time for the National Day holiday.

Construction began in April of this year, effectively closing the entire length of the 2,400 meter-long public promenade along the eastern shores of Dianchi Lake (滇池). The most obvious change is the walkway itself, which has doubled in size from eight to 16 meters wide and been entirely repaved.

Other notable improvements include widened stairways, the installation of lampposts designed to look like butterflies and the addition of new landscaping, including public rest areas and space for concession stands. Midway down the length of the promenade, a new 2,000 square-meter floating platform has also been built. It extends 20 meters out into the lake.

The bulk of the dam's 470 million yuan (US$68 million) makeover price tag did not come from cosmetic changes, but instead from unseen upgrades. The causeway was first built in the 1960s, and has had few structural retrofits since. To shore up years of neglect, engineers drove 1,200 steel-reinforced pilings — some of them 26 meters long — into the underlying bedrock in order to stabilize the dam. 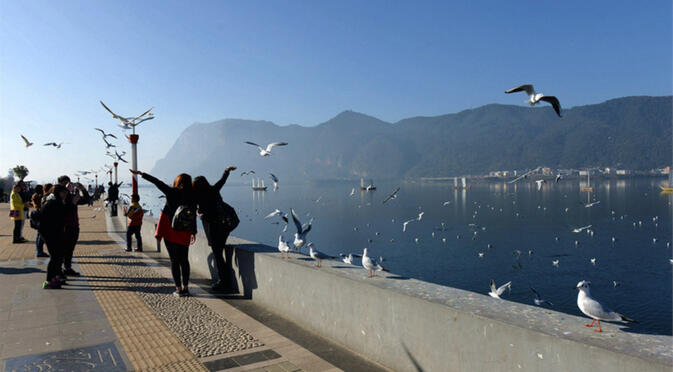 Siberian gull season on Haigeng Dam before the renovation

But perhaps the most expensive feature of project is the installation of 20 water intake gates under the dam. Spaced evenly along the length of the promenade, each inlet is capable of siphoning ten cubic meters of water per second out of the lake. The network of gates is controlled by a computer system which, with the aid of underwater sensors, can detect the sections of water along the dam experiencing the highest concentrations of algae.

Contaminated water is then withdrawn from the lake at a rate of ten cubic meters a second and sent through a filtration system that "removes up to 85 percent of all algae," according to Xinhua News. Once filtration is complete, the cleaned water is then reintroduced into Dianchi near the southern end of the dam.

The computer-controlled filtration system is yet another effort to rid Dianchi of its ever-present but thankfully shrinking sheen of lake-killing algae. The process is expected to augment other incredibly costly and ambitious efforts to clean the lake of its bacterial infestation by seven to ten percent annually.

Combined, the efforts at "beautification" and water filtration have the aim of transforming the Haigeng Promenade into one of Kunming's most popular tourist destinations. The walkway and dam have long been popular because of their commanding views of the Western Hills (西山) and yearly inundation of migrating Siberian gulls. But for most of the past two decades, one major stumbling block has persisted.

Lake water of varying algae-green hues — to say nothing of the accompanying smell — has long discouraged more locals and tourists from frequenting the boardwalk. Hopefully, with the installation of a new filtration system and the influence of a massive water diversion project, the area will see a boom in visitors, perhaps starting just in time for National Day.

Special thanks to GoKunming user tigertiger for keeping us up-to-date on this story.