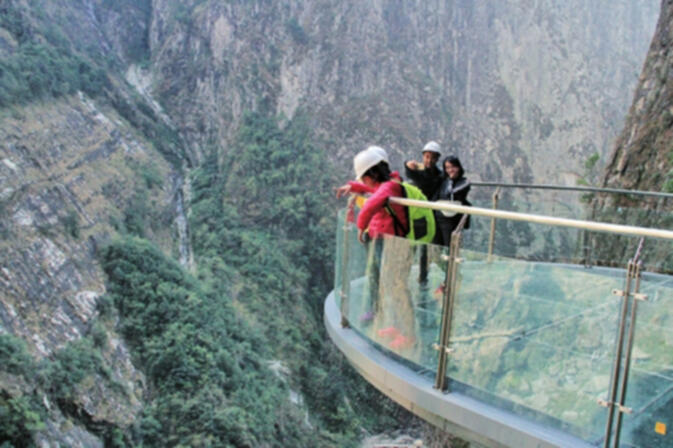 Perhaps inspired by the Grand Canyon Skywalk in the United States, Chinese tourism bureaus have feverishly embraced the concept of building glass bridges and see-through walkways along mountain passes around the country. China's newest and longest version is located in the Cangshan (苍山) mountain range outside of Dali, and sits perched 80 precipitous meters above the valley floor.

The walkway snakes along the cliffs of Shimenguan Gorge (石门关峡谷) near Yangbin (漾濞), roughly 15 kilometers due west — and across the mountain range — of Dali Old Town. The 1.5 kilometer-long glass and steel path features an 80-meter stretch of clear floor that at times passes 180 meters over the ground. It also includes a 30-meter section where tethered tourists can 'rock climb' their way across a cliff face using a series of handholds and built-in ledges.

The Shimen Gorge walkway was built by the Dali-Cangshan Tourism and Development Company at a cost of 30 million yuan (US$4.6 million). Modeled on the hugely popular skywalk in Hunan province's Zhangjiajie National Park, the Dali version utilizes glass planks made by the same company. The bridge reportedly cost 400 yuan per square meter, largely due to designer demands calling for a carrying capacity of six metric tons. 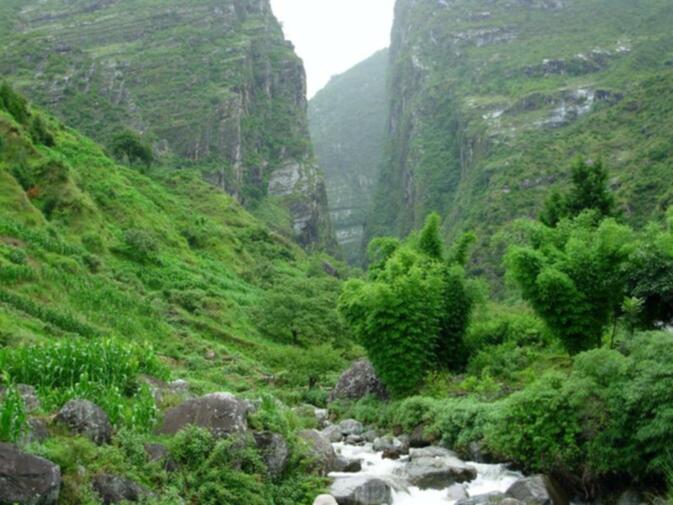 In addition to climbing and glass-bottomed sections, the skywalk features an observation deck extending seven meters was from the mountain face, which overlooks waterfalls, ponds and the surrounding cliffs. The span is not yet available for public traffic, and is instead undergoing a "trial operation" phase. It is expected to open to tourists and curious locals in time for Spring Festival.

Local government tourism agencies expect the walkway to generate enormous demand, and are currently putting the finishing touches on a spate of "rustic Bai minority-themed hotels and inns" nearby. Tourism has, for the better part of two decades, been a staple of Dali's economy, but has largely been centered on the area's famous old town.

However, placing the skywalk near Yangbi appears to be a deliberate move to in effect share the wealth with other nearby locales. The province as a whole is promoting tourism — and especially more eco-friendly activities — as a way of enriching small, out-of-the-way communities. The new attraction in Shimenguan Gorge may serve just that purpose, turning the sleepy mountain setting once known only to intrepid rock climbers into a sightseeing hotspot.