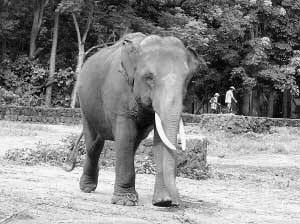 The China Daily is reporting that a bull elephant from Xishuangbanna in southern Yunnan has recovered from a serious heroin addiction it picked up as a victim of illegal elephant trading. The elephant, nicknamed "Big Brother", was fed heroin-laced bananas in order to make it easier to control him and his herd, which they led westward to Dehong, near China's border with Myanmar.

According to the article, Big Brother developed a strong need for heroin after a few weeks of being drugged and would drool and twitch if not given regular doses. When the elephant smugglers arrived in Dehong they were arrested by the Dehong Forest Police. The China Daily explains what happened when the police tried to get Big Brother home:

"While driving the herd back to Xishuangbanna, Big Brother started drooling and bellowing and even tried to run away. The police were surprised to learn from one of the traders that it was suffering from withdrawal symptoms and could pose a danger to people, if not fed drugs immediately...

"The park authorities had thought Big Brother would forget drugs if kept in isolation, but it had been fed drugs for so long that it began to suffer severe withdrawal symptoms and became so wild that even its iron chain could not contain it."

Big Brother was sent to rehab at the Tropical Wildlife Park at the end of 2005. The park combined 50 milligram doses of methodone with a diet of grass, sugarcane and fruit to treat Big Brother's addiction, which took more than a year to kick.

Now a fully recovered Big Brother is preparing to be transferred back to Xishuangbanna, where he'll be let loose in the region's Wild Elephant Valley.