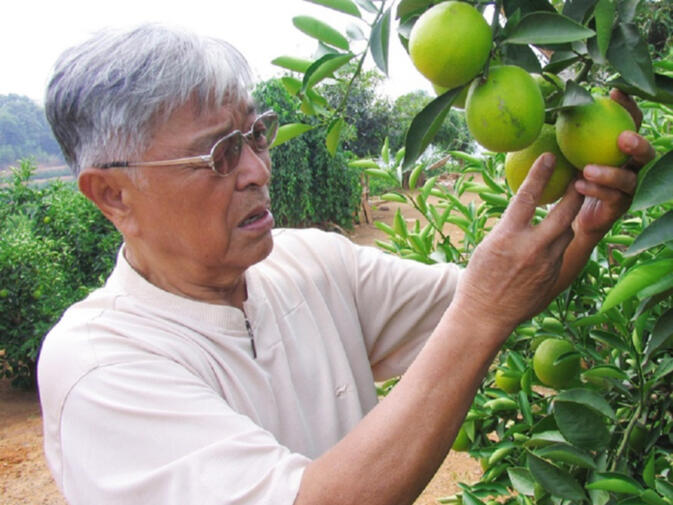 Blossoming orange tree groves in central Yunnan are about as far as one can get from Chinese prison. And that is just how Chu Shijian (褚时健) likes it. Once convicted of embezzling hundreds of millions of yuan, the 88 year-old now owns a citrus fruit empire facing the challenges of doing business in China's digital age.

Chu is founder and CEO of a Yuxi-based fruit company, and his products are simply called 'Chu Oranges'. His orchard's success in breeding and growing specialty oranges has led to a common problem in China — copycat competitors marketing fruits with Chu's name and label that were grown nowhere near his farms.

To combat 'fakes', his company is working with online retailers to make sure consumers can identify legitimate Yunnan-grown Chu Oranges. Cooperating with e-commerce giant Alibaba, Chu has been involved in developing a system where QR codes are used to guarantee each individual fruit is indeed legitimate. According to a report first published by China Business News:

Under the project, an identifying 2-dimensional barcode is affixed to each Chu Orange, which features the fruit's place of origin, grower and the time it was picked. Alibaba matrix code strategy operator Zhang Kuo [said] that the data of the persons scanning the barcodes on Chu Oranges will be automatically transmitted to Alibaba's backend and computers at Chu's company. If someone wants to try and sell fake Chu Oranges, they have to first collect 2-D barcodes from Chu Oranges. And if the locations from the scanned barcodes show signs of abnormalities, they will be traced...

Chu's move — first into the market of high quality citrus fruit, and then into his current position fighting online fraud — is an unlikely one. Born into a self-proclaimed Yunnan "peasant family", Chu became a Communist Party Member in 1952 after fighting in Mao Zedong's army. He slowly worked his way up in the Hongta Cigarette Company after being disgraced as a 'rightist' during The Great Leap Forward.

Eventually, Chu built Hongta into China's largest and most prosperous tobacco company. In 1994 he was honored in Beijing and given an award recognizing him as one of the country's 'top reformers'. Five years later, Chu's fortune turned again and he was prosecuted for embezzling 1.1 billion yuan (US$174 million) from the corporation he raised to prominence.

After being striped of his political rights and serving three years of a life sentence, Chu was released from prison on permanent medical parole in 2002. He bought a small plot of land in Yuxi (玉溪), roughly 75 kilometers south of Kunming, and began to breed oranges. That small enterprise has since grown into a business with 30 million yuan in annual profits.

Chu's life has now come full circle twice, a feat rarely accomplished in a country where anti-corruption is the government's pet cause. His success is based as much on the flavor of his oranges as it is on his fame. Chu Oranges, after all, come with the built-in cachet of redemption and perseverance. Six hours after this year's crop of oranges went on sale on Alibaba, more than 13,000 kilograms had been purchased, not a fake among them.

- Once convicted of embezzling.

- Chu is founder and CEO of a Yuxi-based fruit company.

- His orchard's success in breeding and growing specialty oranges has led to a common problem in China — copycat competitors.

A thief who does not like other thiefs - serves him right. Where did he get the money to start his fruit business? Obviously he stole more than what was initially believed and he was able to stash it where no one could get to it.

Why isn't this guy rotting in prison somewhere rather than getting rich again?