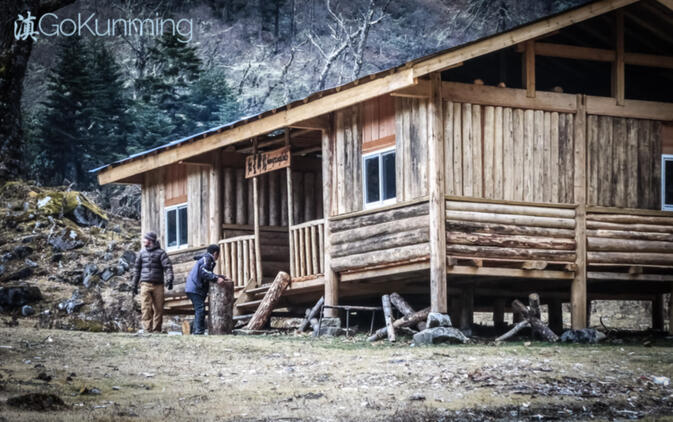 In late October 2010, I traveled to northwest Yunnan to hike over Biluo Snow Mountain (碧落雪山), which stands between the Lancang (澜沧江) and the Nujiang (怒江) rivers. The starting point for the trek was Cizhong (茨中), a small village perched on the west bank of the Lancang — better known outside of China as the Mekong. For the following three days, we climbed over a 4,300-meter mountain pass and travelled through forested valleys. On the last day, we reached Dimaluo (迪马洛), a secluded hamlet nestled in the mountains of the northern Nujiang valley.

My guide was a Catholic Tibetan man named Hongxing (红星), who has been leading tours in the area since 1996 as a way of providing extra income for his family. From his hometown, Cizhong, he often guides visitors to nearby mountains around Deqin (德钦) and Weixi (维西), stopping on the way to visit the area's several monasteries and cathedrals. While trembling in a freezing shelter during my trip over mount Biluo, Hongxing told me he had long hoped to build a waypoint along the hiking and merchant trail between Cizhong and Dimaluo. However, it took him a few years to put this idea into action. 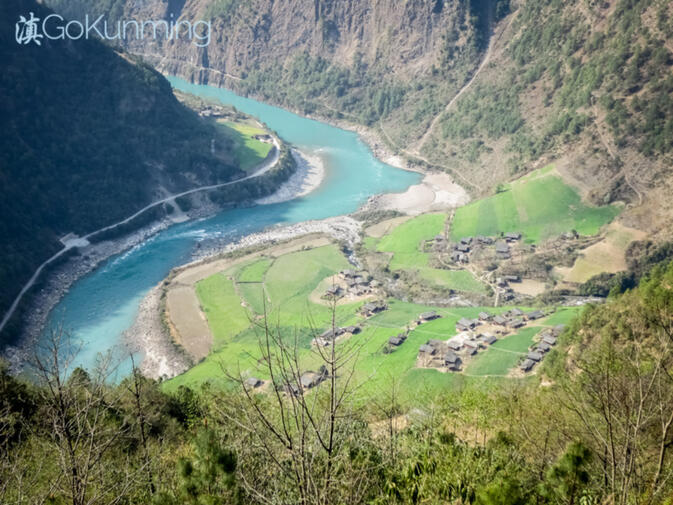 What Hongxing envisioned was a place with good insulation where hikers and local Tibetans could stop and rest comfortably as they walked through the mountains. He also wanted to build something that could strengthen the development of local tourism, but one that would embrace and compliment nature and not detract from it.

With abundant fallen trees in a pasture near Rishatong (日沙桶), the lodge was planned to be built entirely out of wood. In 2013, Hongxing met Brice Mathey, a French artist and sculptor who had come to Yunnan to write about his passion, clay architecture. Mathey's Shelter Project in a Dimaluo meadow, on the other side of the pass, gave Hongxing more confidence about his own plan. It usually takes hikers three days to walk from Cizhong to Dimaluo — or vice-versa — so once both shelters were successfully completed, they would provide accommodation for hikers, who could avoid carrying tents and other cumbersome camping gear. 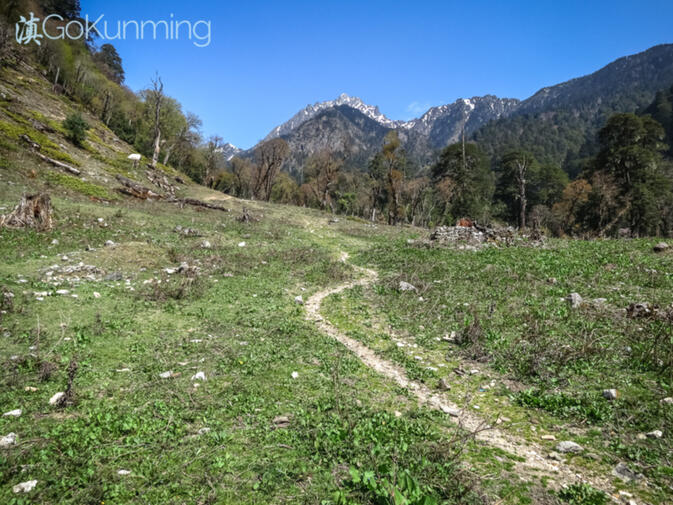 Today, this same trails is used by tourists and villagers alike. They all follow in the footsteps of ancient trades and foreign explorers. A French priest, Father Andre Georges, organized locals to repair and improve upon the old Tea-Horse trade routes that connected Dimaluo to Cizhong in the 1930s. On a rewarding plant collecting trip a decade earlier, Austrian-American Joseph Rock and his caravan also made the same journey in reverse and then walked all the way to Gaoligongshan (高黎贡山), where he described overlooking the Dulong River (独龙江).

Work on Hongxing's project began in late April 2014 — a time he refers to as "timber preparation". Along with one Tibetan logger and his Lisu minority apprentice, he began collecting hundreds of logs. Fallen trees were prioritized for milling over live ones. 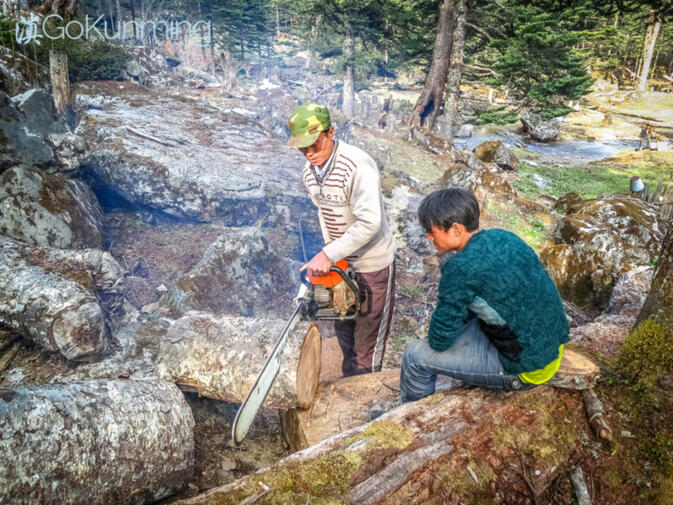 Next, wooden boards were laid for the structure's foundation and flooring. Support for the roof also came from posts and beams made of local timber. To minimize the cutting of trees, aluminum alloy frames with glass panes were set in the wooden log structure for windows, and blue iron sheeting was used for roofing. Leftover lumber was turned into furniture for the lodge. To provide waterproofing and insulation, the bedrooms were roofed with wooden boards beneath the iron sheets.

The "timber preparation" phase concluded in mid-May, when Hongxing made his way back home to work in his family's paddy fields for a week. With the help of two carpenters, Hongxing returned to Rishatong later in May for the second stage of the project. He was expecting to finish the lodge by the end of June 2014, hoping to be able to provide simple accommodation for hikers as early as July. Unfortunately, due to heavy rainfall last summer, the lodge was only completed on July 21. It includes four single beds, which were carried up to the pasture by mules. Although a lot of work remains to be done, Hongxing is confident that everything can be completed by June 2015. 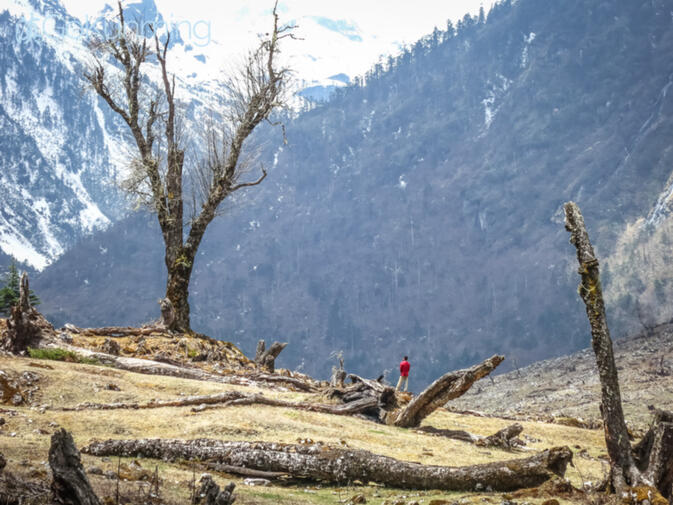 The lodge covers an area of 80 square meters, and includes a big bedroom, a kitchen and a small porch. It is expected to comfortably host ten people in wooden beds — twenty people in a pinch — and also have a big sitting area as well as a fireplace. Plans are in the works for an unattached, permanent bathroom, a wood-burning stove to replace the traditional open-air fireplace and a large wooden basin for bathing.

The lodge sits at 3,220 meters above sea level, nestled up against the Sela Pass (色拉垭口), 27 kilometers from Cizhong. The pasture is utilized from April to November as grazing land for livestock owned by local Tibetan villagers. Hongxing is planning to cooperate with another Tibetan guide named A Luo (阿洛), who also runs a family guesthouse and a trekking guide service in Dimaluo, on the other side of Biluo Mountain. They both expect to use the lodge as a waypoint when they guide hikers over the mountains. 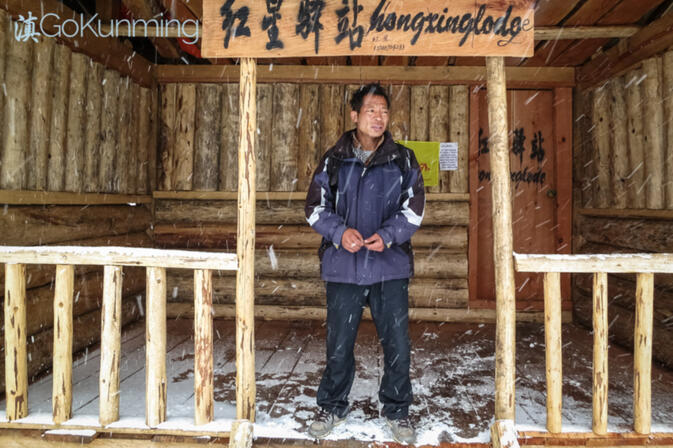 Both men hope the project will make a bit of money for locals as they sell supplies to people visiting the region. If the project proves to be beneficial to the area's tourism economy, they believe Mathey's Shelter Project on the Dimaluo side of the trek can be duplicated with minimal effects to mountain ecosystems.

Hongxing has arranged to employ local woodworkers, but is also looking for volunteers to help build a courtyard, a bathroom, and wooden beds between April and June 2015. Daily life at the lodge obviously involves intense physical work. In addition to carrying timber and doing a bit of carpentry, each day volunteers must collect firewood, boil water, and cook group meals. 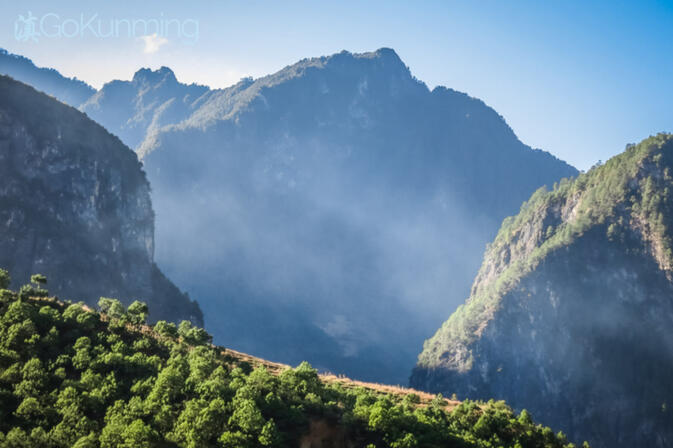 Anyone is welcome, although Hongxing hopes people can devote more than one week of their time, simply because travel to the site can take so long. The trip may take a bit of time, but considering the fantastic diversity of cultures and wildlife in the area, as well as the beautifully rugged terrain, he thinks it is worth the time.

In Cizhong, volunteers can first spend a night in Hongxing's home-stay guesthouse. A guide will then be provided for the half-day hike to the building site the next day. Once at the lodge, food, tents, mattresses and quilts will be made available to volunteers. Those interested in helping out can contact Sun Fei by emailing apu[dot]feisun[at]gmail[dot]com or calling 13988704233 (Chinese only). Keep in mind that cell phone service and internet access are limited at the lodge. For those who would like to contribute but do not have the time, cash donations will also be gratefully accepted. 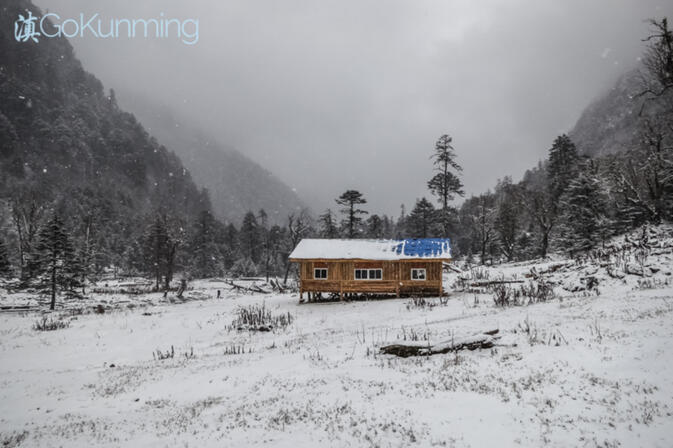 Editor's note: The author would like to thank The British Consulate-General in Chongqing and the Diqing Zangbala Tibetan Ethnic Culture Research Institute, who together in 2014 donated 10,000 yuan in funding for this project. Special thanks as well as Asan Liu (阿三六), for designing the lodge, and Brendan Galipeau and Wang Bo (王博) for all their help. 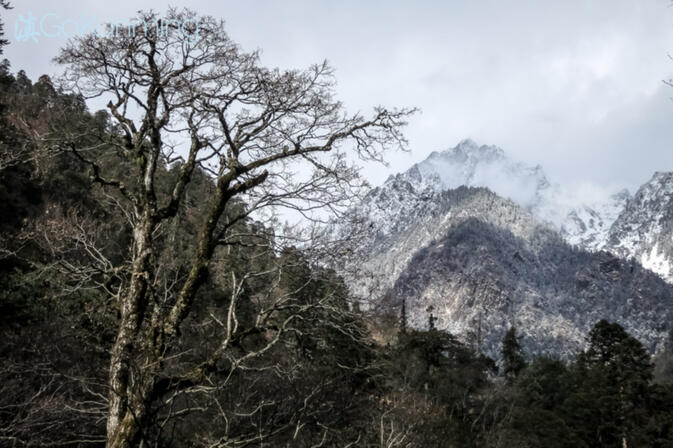 Nice to hear local guides leading the 'tourism expansion' in the area. Yunnan desperately needs more locally based and environmentally conscious entrepreneurs leading efforts. This kind of hiking/outdoors micro-business management would suit many villagers throughout Yunnan's most isolated and breath-taking regions (i.e. Gaoligongshan, Dulongjiang, Ailuoshan, Menglian, etc.). Even more, it would be nice to hear efforts to create a Yunnan-wide, trail/lodges system—much like the 'GR' and Appalachian Trails in Europe and America. It would attract not only local expat and Chinese hikers, but a world wide audience. Which hiker wouldn't want to try hiking from the Himalayas to SE Asia! Well done and much respect to all the people who worked on the aforementioned projects!

Thanks Sun for this

This is exactly how the Appalachian Trail started - local people and enthusiastic volunteers improving the trails and building simple lodges and lean-tos. It was built section by section by local people.

Apu, is there a hiking club in Shangri-la that could get involved with this effort? Like the Adventure Trekking Club in Yuxi that has been so involved with the Ailaoshan trail system.

Where exactly does the Ailaoshan trail start/end? Any maps?

Love this article, thanks for writing about this. The trek from Dimaluo to Cizhong is beautiful, with two ~4000m passes between them. With Mathey's shelter project in Siwalongba (between the passes) and Hongxin's lodge in Rishatong (on the Mekong side), it's great to know it's possible to do this walk without having to carry so much equipment, or hiring mules to carry for you. Article didn't mention that Hongxin, a great fellow, also is making some very good wine.

Hi Bill, I think the Cizhong-Dimaluo Trail is only second to Tiger Leaping Gorge Trail in terms of reputation. As Mt. Biluo is neither a Nature Reserve nor tourist attraction, it has been a favourite haunt of hikers all of the world, so I don't put too much hope on the local Adventure Trekking Clubs engaging in this effort.