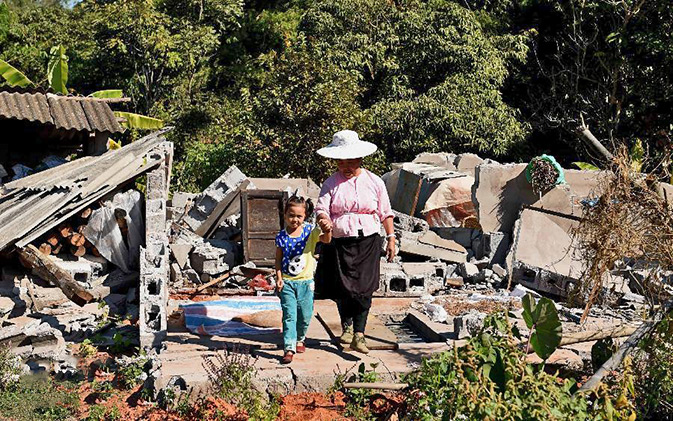 For the second time in less than two months, Jinggu Dai and Yi Autonomous County (景谷傣族彝族自治县) in southern Yunnan suffered a series of strong earthquakes. Officials at the Yunnan Disaster Prevention and Research Institute say the weekend quakes are most likely aftershocks from a 6.6 magnitude temblor that struck the same area in October.

The first of the two major earthquakes shook Jinggu County around 2am on Saturday, December 6. Reported by the Chinese Earthquake Administration as magnitude 5.8, the initial convulsion was followed 16 hours later by a stronger, 5.9 quake. Epicenters of the dual tremors were located roughly ten kilometers apart.

Media accounts vary regarding the total number of wounded, but casualties were relatively light. Reports range from 15 to 22 harmed but agree that most were only slightly injured. A single fatality has also been confirmed, that of a nine year-old boy who was killed when the house he was sleeping in collapsed during the second quake.

As with the disaster two months ago, overall damage to houses and other structures is far less extensive than relief coordinators initial feared. In total, 1,302 houses were destroyed by the twin quakes and an estimated 6,000 others suffered structural harm. Traffic in the area was, in places, temporarily halted, but water, electricity and telecommunications utilities were largely unaffected.

Jinggu lies 400 kilometers southwest of Kunming in Pu'er, and is nestled midway between the prefectural capital and the city of Lincang. The county sits atop the Puwen fault line and is prone to earthquakes as the area borders the far eastern periphery of where the Indian and Eurasian tectonic plates butt up against one another. The last major quake to hit the area occurred in 2007, temporarily displacing 120,000 people.

Following the tremors this weekend, acting provincial party secretary Li Jiheng dispatched 2,500 relief workers and soldiers equipped with tents, quilts and bottled water to affected areas. Li urged rescue personnel to help restore Jinggu to normality as soon as possible while provincial officials attempt to calculate how much money should be allotted to assist the 11,000 people relocated following the quakes and their aftershocks.

so the big earthquake that's going to wipe us all out is coming when? 2015?