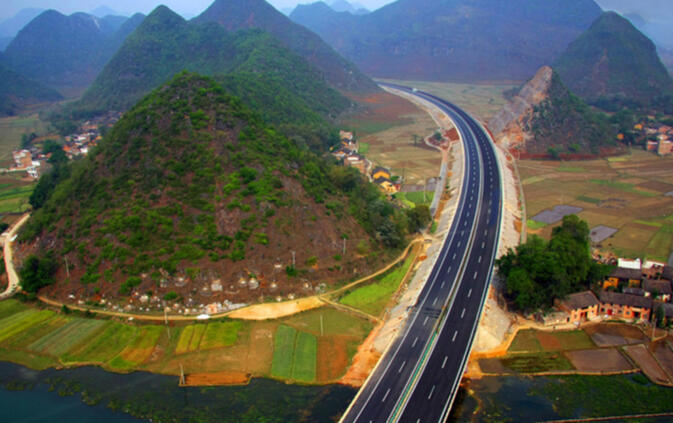 Yunnan lawmakers were busy over the past seven days, earmarking billions of yuan for building projects across the province. The vast majority of the money will be used to fund the ongoing construction of 26 major highways. Other money has been set aside for waterway maintenance and "disaster mitigation" projects.

The Provincial Highway Bureau expects to initiate or continue work on 1,500 kilometers of highways in the next two years, it announced in a July 14 press release. In total, the new roadways will cost 100 billion yuan (US$16.1 billion), spaced out in annual 50 billion increments over the next two years.

Stretches of road scheduled for completion this year include highways connecting Lijiang to Shangri-La, Ruili to Longling and Huaping to Lijiang — which is a segment of the road linking Lijiang to Chengdu.

Obtaining loans for massive infrastructure ventures has become increasingly difficult as China's once-humming economy continues to slow. Statistics published by news outlet Kunming Information Hub show that in 2011, the province experienced a two billion yuan shortfall between toll road revenue and what it owed in loans for highway construction.

To avoid a repeat of that deficit, provincial planners voted to implement tolls on many of the new roads, effectually passing the bill on to automobile owners. People traveling by bus will also pay a share of the costs. Currently, a 0.5 yuan surcharge is attached to the price of every long-distance bus ticket purchased in Yunnan. That fee will now be raised to 0.9 yuan to help fund highway expansion. Long-distance transport trucks will also face higher fees based on load tonnage and distance traveled.

An additional twenty billion yuan was pledged for waterway upgrades. Details have not been fully disclosed, but some monetary allocations will fund canals connecting rivers to reservoirs as well as maintenance on dams and hydropower stations across the province.

Although highways and water infrastructure projects comprise the lion's share of the recently allocated money, two billion yuan (US$322 million) was also designated for the prevention of ecological disasters. Surveyors have identified thousands of "hazard points" in Yunnan — places where roadside cliffs are prone to rockslides or where villages are threatened by mudslides due to deforestation. Over the past fifteen years, Yunnan has suffered a reported 17,258 geological disasters. These claimed the lives of 1,394 people and led to more than seven billion yuan in economic losses.

So if 70 is available it means 100 was the original ammount before the usual "comissions in various levels" are applied.

Let the corruption games begin - flaunting Xi JinPing's admonishments for government officials to "clean up their acts". I suppose from a corrupt government official's perspective - they're already screwed and are just waiting to get caught, so may as well party until the hammer drops.