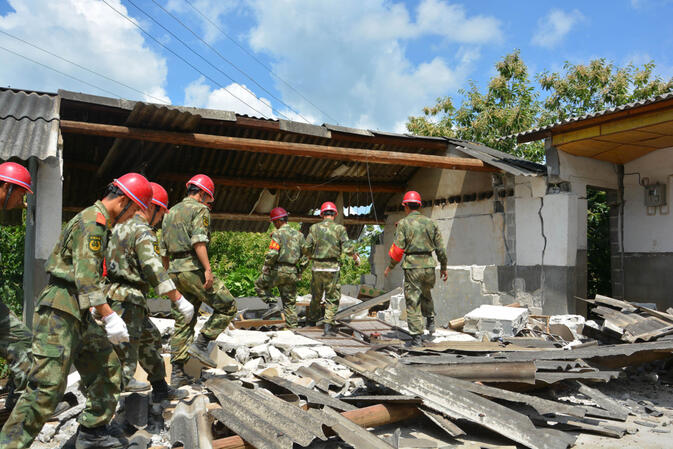 An earthquake with its epicenter below Yingjiang County (盈江县) struck western Yunnan on the morning of May 30. The 6.1 magnitude quake injured 43 people and destroyed scores of houses and other buildings in Dehong Prefecture (德宏州).

Residents of Yingjiang fled to open areas as the quake toppled 700 structures and damaged thousands more, displacing upwards of 45,000 people. The quake devastated roads, bridges, and electric plants, cutting power to several townships. Although the tremor originated on the China-Myanmar border, 65 kilometers from the city of Myitkyina, Burmese officials were quoted as saying they "[hadn't] heard any information about damage or casualties" on the Burmese side.

This temblor was the latest in a series of earthquakes that have crippled Yingjiang over the past week, including a 5.6-magnitude event that hit the same area on May 24. The quake on May 30 was the largest to hit anywhere in Yunnan this year. A newly implemented province-wide early warning system reportedly gave students and office workers a 12-second evacuation period by sounding sirens.

Relief efforts were rapid and forthcoming, as the provincial government deployed 1,000 soldiers to aid with rescue efforts and provide tents and bedding to the homeless. A team of 50 surveyors is conducting aerial assessments and damage evaluations in preparation for reconstruction.

In the aftermath, families have begun to pick up the pieces and proceed as usual. On Children's Day, which fell two days after the earthquake, troops and counselors visited Yingjiang's relief sites to play games of 'Chicken Mom' (老鹰捉小鸡) and Chinese checkers with primary school students. Plans are underway to construct 38 ad-hoc exam rooms for the county's high-school seniors, who must take their university entrance exams — known as the gaokao (高考) — later this week, disasters notwithstanding.

'Plans are underway to construct 38 ad-hoc exam rooms for the county's high-school seniors, who must take their university entrance exams — known as the gaokao (高考) — later this week, disasters notwithstanding.'

Just one reason to have tons of respect for Chinese students.