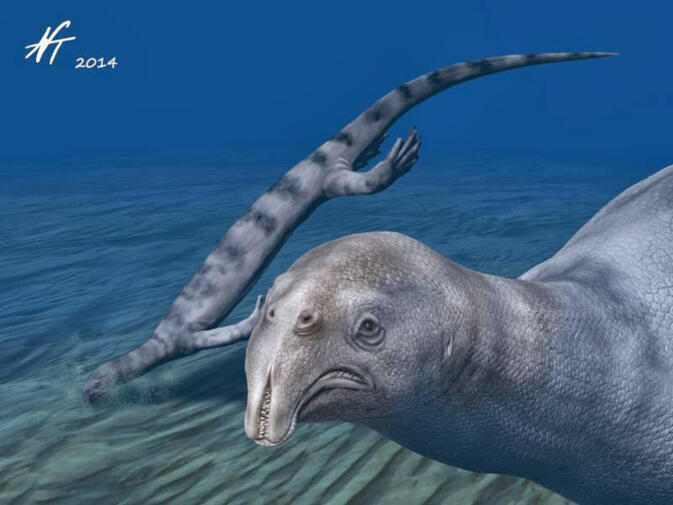 Paleontologists from around the world flock to Yunnan to explore and dig in the province's red earth. And for good reason. Every year, oftentimes twice or three times annually, a new plant or animal hundreds of millions of years old is unearthed, often providing special insight into how evolution played itself out.

The most recent find of this kind was announced by a research team headed by doctors Long Cheng of the Wuhan Institute of Geology and Wu Xiaochun from the Canadian Museum of Nature. Long and Wu recently published their findings in the peer-reviewed scientific journal Naturwissenschaften. The scientists' abstract describes the discovery as a nearly complete three-meter fossilized skeleton of a peculiarly visaged dinosaur. The research team has dubbed the animal Atopodentatus unicus.

The fossil was discovered near the town of Da'aozi (大凹子), about 210 kilometers west of Kunming in Luoping County (罗平县). Atopodentatus unicus is a reptile thought by researchers to have been semi-aquatic, living approximately 245 million years ago during the Middle Triassic period.

What makes the animal particularly unique is the structure of its head. Atopodentatus unicus' mandible, or lower jaw, curves sharply downward from where it connects to a short, stocky neck. Still more curious is the nose-like appendage mounted above and in front of the creature's mouth and attached to the cranium. 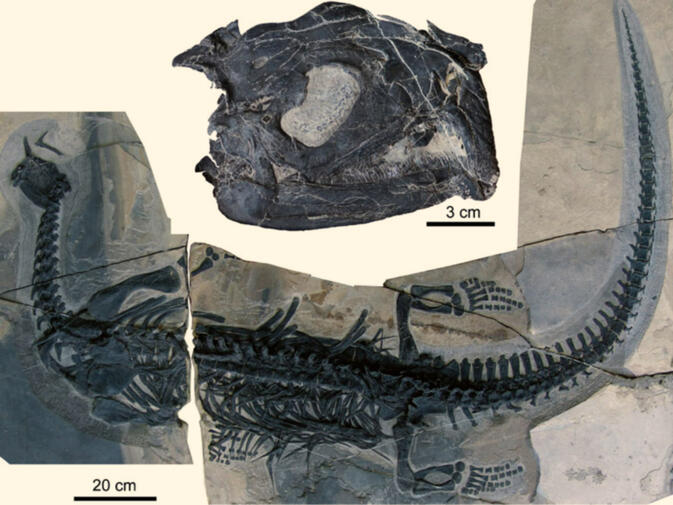 The snout appears to be something out of a science fiction movie, divided vertically and lined down its middle with dozens of tiny needle-like teeth. It is this appendage that has Long and his team stumped. The zipper-like snout, which doubles as the upper jaw, does contain teeth, but researches feel they are too fine and lack hinged joints that would have enabled the animal to attack and secure prey.

Instead, Long and Wu's team theorize Atopodentatus unicus might have been a filter feeder rather than a hunter. In their report, the scientists theorize:

It is obvious that such delicate teeth are not strong enough to catch prey, but were probably used as a barrier to filter microorganisms or benthic invertebrates such as sea worms. These were collected by the specialized jaws, which may have functioned as a shovel or pushdozer [sic] and a grasper or scratcher.

The animal has tentatively been placed in the group of reptiles referred to as Sauropterygia — or 'lizard flippers' — although this designation could change following further research. Sauropterygians were aquatic reptiles, often of immense size, characterized by specialized shoulder joints attached to flipper-like appendages.