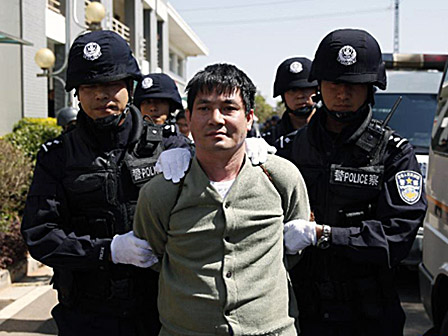 The executions of four Burmese nationals yesterday in Kunming have set off an explosive online conversation both domestically and outside of China. The controversy stems not so much from the executions themselves, but instead from the television coverage surrounding them.

In the run-up to the executions, China Central Television (CCTV) aired a nationally televised program ABC News reports was scheduled to conclude with live executions. The program, however, ended before the men were put to death.

The two-hour show was staged much like a sporting event. The broadcast team consulted legal experts, provided commentary, repeatedly cut away to footage of the convicted men being led from their cells and ended with live interviews of the condemned men.

Immediately following the program, the country's micro-blogging websites erupted as Chinese citizens reacted. Many questioned the decency and intent of the show. Others heralded the executions as swift justice for men convicted of killing 13 Chinese sailors.

The four men were tried in a Kunming court with murder, drug trafficking, kidnapping and the hijacking of ships along the Mekong River in 2011. Naw Kham, a drug kingpin from Myanmar, and three of his associates were found guilty of all charges in September 2012.

The court sentenced all four men to death by lethal injection. Before the trial began, Chinese police characterized their cross-border investigation as "the most complicated criminal case Chinese police have ever handled."

The video below does not contain any violence. It does however, show a man being shackled and led to his death. We at GoKunming urge our readers to view it at their own discretion.