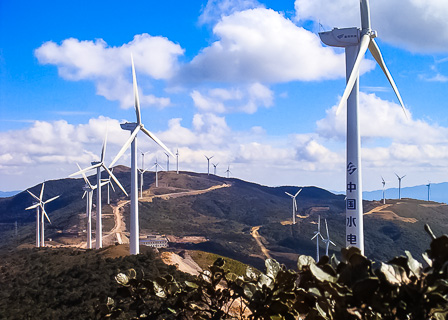 Chinese wind turbine maker Ming Yang has signed an agreement to develop one of the world's largest onshore wind farms in Dali Prefecture. The 300 megawatt project will be built 350 kilometers west of Kunming in Weishan (巍山), Recharge is reporting.

The Weishan Wind Farm (巍山明阳风电项目) is expected to be fully operational by 2016. The three-phase project will cost an estimated 2.8 billion yuan (US$450 million). Turbines, engines and support structures for the windmills will be produced at Ming Yang facilities in Dali. According to Chinese media, one turbine can be manufactured by the factory every ten days.

When the construction is finished, the new turbines in Weishan are expected to generate electricity worth 600 million yuan (US$96 million) per year. The turbines are specifically designed for deployment in high-altitude areas.

Yunnan lags behind many other provinces in terms of wind energy production. The first commercially utilized windmill in the province was only installed in 2008. A wind farm built last year in Fumin County now supplies Kunming with some of its electricity needs.

Although wind farms produce far less power than hydroelectric projects, they come with fewer built-in environmental concerns and are generally cheaper. The need to further exploit wind resources in Yunnan was specifically cited in a national energy policy report earlier this year.

Despite doubling its wind power over the past two years, Yunnan produces only four percent of its electricity in this manner. That percentage is expected to rise sharply as the provincial government has approved plans for 16 additional wind farms with a combined generating capacity of 2,200 megawatts.