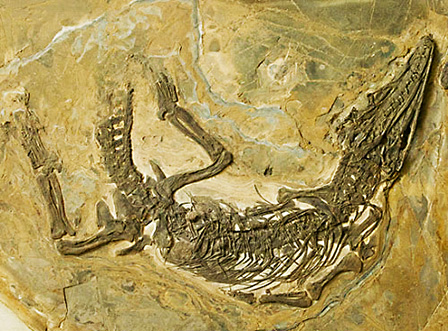 A new species of ancient reptile, distantly related to today's birds and crocodiles, has been discovered in Yunnan. The animal bears several distinctive traits that make it different from other, geologically similar finds, the Morning Post is reporting.

Paleontologist Li Chun (李淳) and his team of bone hunters from the Institute of Vertebrate Paleontology and Paleoanthropology have dubbed the new species Diandongosuchus fuyuanensis (富源滇东鳄). The name is taken from the single character for Yunnan, Dian (滇), and the eastern county where the discovery was made, Fuyuan (富源县).

The nearly complete fossil specimen was discovered more than 12 months ago but the paleontology team headed by Li spent the last year conducting research before publishing their results earlier this month. Their research found that the new species lived roughly 235 to 250 million years ago during the early to middle Triassic Period.

Diandongosuchus lived on the shores of the ancient Tethys Ocean which formed the border between the mega-continents Laurasia and Gondwana. The fossil measures 97 centimeters long and Li hypothesizes that adults would have grown to roughly 155 centimeters from tail to snout.

The group of animals to which Diandongosuchus belongs are referred to scientifically as Archosaurs, and include dinosaurs and modern-day bird and reptile species. Reptiles closely related to Diandongosuchus were originally thought to be strictly terrestrial but recent discoveries in Yunnan and Guizhou have suggested otherwise.

Through analysis of the fossil's bone structure — especially its vertebrae and skull structure — Li's team determined the new species was not strictly terrestrial or aquatic. They also somewhat surprisingly discovered clues regarding the ancient reptile's diet. According to Li:

These skull features suggest that Diandongosuchus might have had a lifestyle similar to [...] recent saltwater crocodiles, living near the water and adapted for an amphibious way of life. In addition, such a way of life for Diandongosuchus may be further inferred from its stomach content that includes fish remains.

Several important fossils have been unearthed in Yunnan in the past five years, including a billion year old walking cactus and a previously unknown species of human.