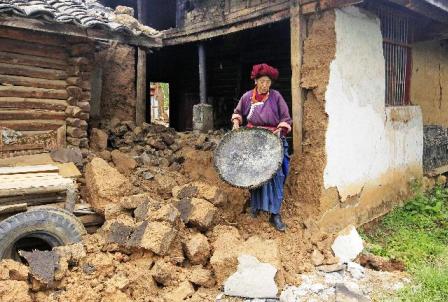 A magnitude 5.7 earthquake followed by more than 50 aftershocks razed small buildings and left thousands homeless near Yunnan's border with Sichuan on Sunday. Four people have been confirmed dead and more than 128 were seriously injured, China Daily is reporting.

At least 22,000 people have been left homeless by the temblor, which struck at 3:59pm. The epicenter of the earthquake was 200 kilometers north of Lijiang, in Ninglang county (宁蒗县). The area is near Lugu Lake, an area largely inhabited by people of the Yi minority.

Government officials in affected areas are overseeing 1,300 relief workers who have distributed 2,000 tents and 3,000 blankets while searching for people who may still be trapped in collapsed buildings.

A major concern for people living in the affected area is aftershocks. Yunnan is currently in the middle of the rainy season and earthquakes and aftershocks can trigger landslides on ground already loose or muddy.

Following the 1996 Lijiang earthquake there were more than 200 landslides that caused further damage and hampered rescue crews.

In the wake of Sunday's earthquake Lugu Lake was closed to tourists and has yet to reopen. No other travel in the area around Lijiang has been restricted, and trains between Kunming and Chengdu are running normally, Yunnan Net is reporting.