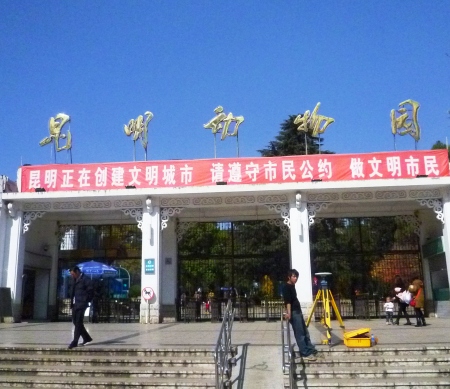 After months of rumors and speculation, it is finally official: Kunming's downtown zoo will be moved out of the city and its current location on Yuantong Mountain (圆通山) will be converted into a city park.

The location of the new zoo has yet to be determined, but it will reportedly be 1000 mu (67 hectares), just under three times the area of the current zoo.

According to a Kunming Daily report citing city officials, it will be in Anning, about 30 kilometers west of Kunming or Chenggong new district to the city's south. Kunming residents have been asked to send their thoughts on where the new zoo should be to kmyljfjylc(at)163(dot)com. 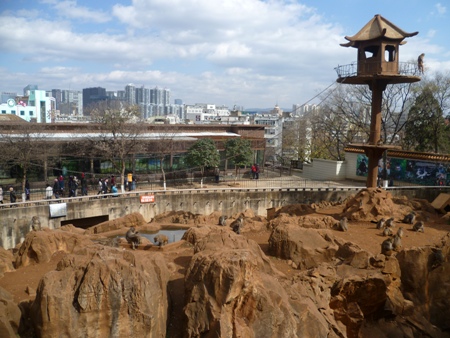 The current Kunming zoo opened in 1953 and covers 23 hectares of Yuantong Mountain, which it shares with Yuantong Temple plus a smattering of hotels, restaurants and bars.

The current zoo has more than 2,000 animals representing more than 170 species, including some highly protected species such as the Yunnan golden snub-nosed monkey and Siberian tiger. 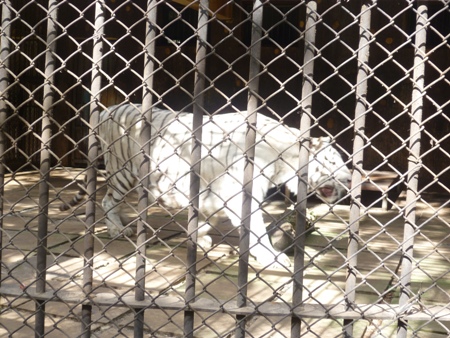 Most animals have just enough room to walk in circles

Wherever the new Kunming Zoo is built, it is hoped by many that the conditions for its animal residents improve greatly over the current zoo, which would be difficult to describe as anything other than inhumane.

Most animals in the zoo have very little space to roam and are often in cages that resemble prisons and many animals exhibit signs of neglect or injury. No effort has been made to recreate the animals' natural habitats, and many of the animals on display show signs of depression or other mental disorders. 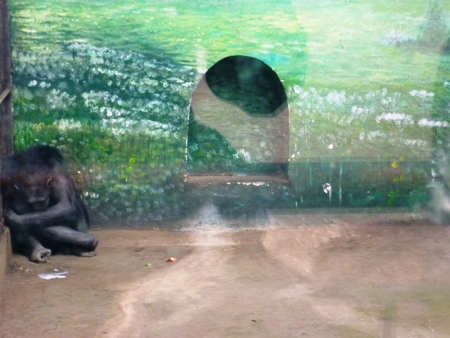 The treatment of animals in China's zoos has drawn much criticism online, including in this website's forum section, but there are some indications that the country is slowly moving toward a more humane approach.

In January of this year the China Zoo Association banned animal performances in zoos.

Practices such as removing the teeth of tiger cubs so that visitors can hold them and selling animals to be fed to great cats have also been banned. However, as always, a rule being passed in Beijing is one thing – whether it is enforced locally is a different matter.

For sure the zoo was left in very poor condition for a dozen of years (no investment in infrastructure or cage improvement). Everytime I visit it with tourists they were ashamed by half of animals caring (especially mammals).

Another question is why they don't merge this zoo with the new very big one at the end of LongQuanlu ?

The safari park in the north is a private company, so no merging with the government zoo.

If they haven't got land yet for this project yet then I think the animals will be living in the current zoo for at least 5 more years.

I heard this was to happen in 2004, still almost 10 years and no action, strange,, I guess people are still hoping to convert the mountain area to villas.

anybody wanna join me on a mission to arm the chimp with a gun and a pack of smokes so he has a fighting chance. Poor guy has had a terrible life and at the very least deserves to go out in a blaze of glory.

When I came to the Kunming Zoo in 1996,as a Belgian I tried to understand the condition of the zoo.The living standard of Chinese people was not that high as it is today.So for that reason I was not that shocked.But I had problems with the fact that Kunming wanted to have a zoo at all in such sad(bad) conditions...People enjoyed the zoo,I could see that.But my family who was with me that time found it terrible.Because we all, were used to have animals in a zoo in very nice conditions.A zoo is not a free world for animals, but to keep a middle way we need to take care if we want to expose them and that was not happening that time.And as the article says,also not today.So lets hope we can have the same entertainment in the new zoo but with an environment for these animals that both suit us human and animals.It must be possible.It brings us better feelings when we see the animals "smiling"...

Yes Colin, count me in

To answer (or raise) questions about the relationship of the safari park and the zoo, I can offer you some "experts" (as well as some journalists) opinions, quoted from a China daily article in 2004. You'll find the link to the whole article on the bottom of my post...

... "The zoo is a well-run commonweal which belongs to the public and State," she says. "The wild animal park is a private enterprise. I could never understand why such a good base for zoological education and research should be dumped and its assets be given to a private entity — Huzhou Jinjing Investment Co Ltd from Zhejiang. Isn't this a drain of State property?"...

..."in China, most such [safari] parks are simply artificial surroundings for animals to run loose, some experts point out. So there is no essential difference between such parks and zoos, except parks are farther out of ordinary citizens' reach and charge more for admission.In Kunming's case, the zoo charges 10 yuan (US$1.25) for adults and five yuan (about 60 cents) for children, as compared to the park's 35 and 100 yuan (US$4 or 12) for locals and tourists from outside Kunming, not to mention its distance from the city."...

..."As a commonweal, a zoo focuses on education, research and other public interests, while a park as an enterprise is destined to pursue profits."...

I think there is just no empathy for animals left, and oh yeah, how is a zoo in Anning or Chneggong close enough to be called in "ordinary citizen's reach"? Let's hope they'll only extend the premises and not the number of animals too.

3 years on, it hasn't moved

Hasn't moved "toward a more humane approach"? Correct for both the Kunming Zoo and the Yunnan Wild Animals Park.

Seriously underfed tigers and lions with removed teeth and claws are still performing there.