Review: Sounds of the Yunnan Countryside 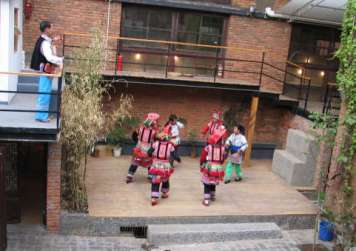 Saturday's special outdoor performance of 'Sounds of the Yunnan Countryside' in Yuansheng Studio's courtyard theater was much more than a music and dance performance. It was a musical bridge connecting the present to the past, when songs linked people to their daily chores, each other and the rest of the universe.

The performance consisted of 13 separate acts, each lasting five to ten minutes long, with each act capturing the imagination in a different way. The different acts contained stories of life, death, love and courtship taken from the musical traditions of Yunnan's Wa people and the Huayao, Sandaohong, Honghe, Lüchun and Weishan sub-branches of the Yi people.

The opening act 'Leaves' - in which performers Luo Fengxue, Wang Liliang, Pu Jiufen and Li Wenyu blew on leaves to produce eerie high-pitched songs - transformed the outdoor stage into a mountain meadow. Throughout the afternoon's performance, Luo Fengxue emerged as one of the troupe's most spirited and multitalented performers - no easy feat considering the versatility and experience displayed by the other members. 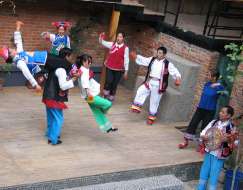 Some acts such as 'Playing under the moon' involved a dozen or so performers, several instruments and complex choreography. Other acts were solo performances, most memorably Yan Bing's performance of traditional Wa songs on several different types of flutes and even a bagpipe-like instrument with a small gong. Yan introduced each song's origin and the instruments he played before casting his spell with the unlikely sounds he was able to produce. Yan also returned in a fantastic chicken costume to dance and play another of the unique instruments in his arsenal for a performance of the Wa people's sacred rooster dance.

The fact that nobody in the audience could understand the Yi or Wa languages featured in the afternoon's performance was not detrimental to the performer-audience dynamic. In 'Yi Language', one of the shorter acts, Wang Liliang sits on a stool and sings unaccompanied to the audience in his dialect of the Yi language. In some ways it felt as if Wang was channeling all of our ancestors, telling us that despite our skyscrapers, Internet and cappuccinos, we are subject to the same forces that have shaped the human experience from the beginning: birth and death, creation and destruction, love and heartache.

The final act of the afternoon was a palate cleanser of sorts in that it was the only act to feature drums. The thunderous performance featured five women from the Lüchun sub-branch of the Yi people playing two drums known as yangzai gu. The women's drumming, singing and dancing tied the different emotions experienced throughout the afternoon into a perfect knot, imparting a sense of completion and closure upon the audience, who returned the favor with several ovations.

The final performance of 'Sounds of the Yunnan Countryside' takes place at 8 pm tonight (Sun, March 25) within Yuansheng Studio's interior stage. Tickets are 80 yuan for the general public and 50 yuan for students with ID.