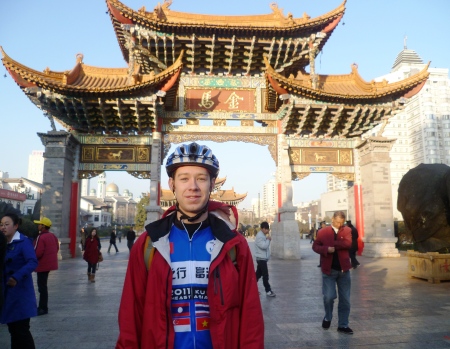 This past Sunday a group of seven cyclists set off on a three-month bicycle journey through Southeast Asia to Singapore to deliver a message of friendship to cities in the region. One of the seven was American Jesse Millett, who represents the third generation of the Millett family to have ties to Kunming.

We spoke with Millett before he began his journey to find out more about his family's connection to the Spring City plus the rationale behind his coming weeks pedaling through Southeast Asia:

GoKunming: How did you end up coming to Kunming?

Jesse Millett: In 2004, after finishing two years of college, I decided to take a year off to pursue my interest in traveling and to take the time to decide what I would like to continue studying. My plan was to head to South America, but the day I was about to buy my ticket, my uncle called and asked, "Jesse, how would you like to be a tour guide in the Himalayas?" Now my uncle has a way with twisting the reality a bit, but how could you refuse such an offer?

My uncle, Gregg Millett, had just returned from his first trip to Kunming where he delivered color photographs that my grandfather, a doctor in World War Two, had taken of Kunming in 1944. The photographs were received by Mr Jin Feibao who put on a breathtaking exhibition which established a sincere friendship between Feibao and our family.

At that time Jin Feibao ran a modest trekking agency, and my uncle's idea was for me to work as a guide in his agency. With no knowledge of China, or Chinese, and having never led a tour before I thought that was very unlikely, but I was intrigued by the offer and hopped on a plane soon after.

Through e-mail, Jin Feibao had told me that he would pick me up at the airport and find a cheap hotel for me. Once I arrived, he invited me to his home, where I lived for four months. Within those four months my friendship with Feibao grew exponentially, as did my interest in China.

Over the next six years, I have frequented China, especially Kunming, and am very proud to be accompanying Jin Feibao on his bicycling trip across Southeast Asia.

GK: What is the purpose of this bicycle trip?

Jesse Millett: There are two main purposes for our trip. The first is to act as messengers for the mayor of Kunming, Mr Zhang Zulin, delivering his letters of friendship to designated city officials throughout Southeast Asia. By doing this we are not only strengthening the ties of friendship between Kunming and Southeast Asia, but are also helping to publicize the beautiful countries of Southeast Asia.

Our second objective is to raise awareness to the environmental problems of the area. By bicycling, we are leaving an almost undetectable carbon footprint. Our hope is to spread our concern with protecting the environment and to try and discourage harmful practices.

GK: What is the general route and how long are you estimating it to be?

Millett: We leave Kunming on Sunday, January 9th heading for the Laos border at Mengla. From there we head south to the Laotian capital, Vientiane, and then either east to Vietnam, or all the way down Laos to Cambodia. After Cambodia we will head to Bangkok, Thailand, and then south down the peninsula.

At the southernmost tip of Myanmar, we will cross the border by boat and do a one week loop, returning back to Thailand. Then south to Malaysia and finally ending our trip in Singapore. The trip should take us no longer than three months, totaling over 7,000 kilometers.

GK: Who else will be going with you on the trip?

Millett: We have eight members on our team. Leading us is Jin Feibao and his brother Jin Feibiao. The team coordinator is Feng Yunxiang. Also joining us are two Kunming reporters, Yang Haidong, a photographer from Kunming City Daily Press, and Li Yuan, a reporter from The Spring City Evening News.

The only two foreigners on the team are myself and David Alexander Hiebaum, an Austrian who lived in Kunming for four years from 2002 to 2006. Fei Xuan, a geologist from Kunming will also meet up with us along the way.

GK: What will you be taking with you on the road?

Millett: I'm trying to travel light. Besides a few sets of clothes and rain gear, I'll be carrying my computer to keep regular updates of our trip, a sleeping bag and other basic survival gear, and some music to keep me company.

GK: What are your biggest concerns about the route?

Millett: Safety is my biggest concern by far. We will be traveling through some pretty rural areas, where a breakdown could be treacherous, as well as some potentially hostile areas, not to mention the ridiculously dangerous driving habits.

Recent rises of dengue fever in Cambodia and Vietnam are also something to be concerned about. I have training in wilderness first aid and am a certified wilderness first responder, so my skills will add an important attribute to the team.

GK: What are you looking forward to the most?

Millett: Traveling by bicycle has always been my preferred method of travel and I am most looking forward to the beautiful countryside that we will see and all the interesting people that we will meet along the way.

Is that the same Mayor who destroyed my balcony?