A slice of life in Bangdong Village 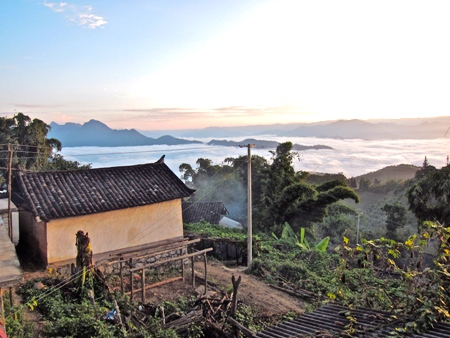 Bangdong Village in the early morning

Eli Bildner recently visited Bangdong Village in southwest Yunnan and provided the following account of his experiences there. If you have stories, photos or video from around Yunnan that you would like to share with GoKunming readers, please contact us.

If you're going to spend a night in Bangdong Village, don't expect to sleep in.

A day in Bangdong Village (邦东村) begins around 6:00, when the roosters that have been crowing regularly throughout the night emit one final, collective call. After which the headstrong sleeper faces a series of equally intractable trials: barking dogs at 6:15, jingling cowbells at 6:30, and the sound of hungry pigs tearing into their breakfast. By the end of my stay, I was able to make it past the dogs.

Thankfully, a Bangdong day ends early too; as the winter sun sets in early evening, the rutted dirt streets grow quiet and dark. Walking down to the village's only store during our second night in town, I was glad one of my travelling companions had brought a headlamp.

I'd traveled to Bangdong on behalf of Village Progress, an NGO founded by the owners of Salvador's Coffee House that is dedicated to improving living conditions in their employees' hometowns. Nearly all of the restaurant's workers hail from rural Lincang County, and in the past years, co-owners Colin Flahive, Josh Pollock, Naoko Okano, and Kris Ariel have traveled to Bangdong and nearby villages to attend employees' weddings and to purchase local tea and rice for use in the restaurant. 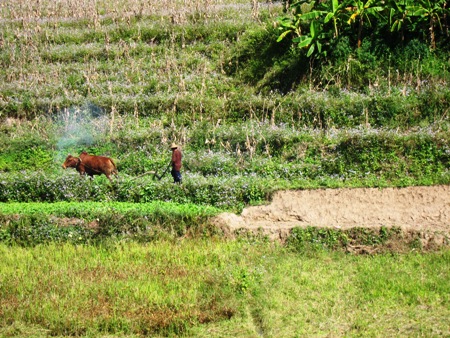 Working the land in Bangdong

Now, with Village Progress formally incorporated as a non-profit in the United States (and seeking similar recognition in China), Josh, Kris, and Colin had returned to Lincang to explore other areas of assistance. I'd come along to support the work of Heinz Willems, a Kunming-based microfinance expert, who was working with the Salvador's founders to conduct some preliminary surveys of the Lincang villages - which is how we ended up at the village store at dusk on our second day in town.

Earlier that day, a local man named Zhang Dadie - "Grandfather Zhang" - had promised to set up an evening interview with his wife, daughter-in-law, and a few female neighbors. Our group jumped at Zhang's offer. Though we'd already spent a full day questioning Bangdong residents about their farm work, home life, and financial practices, we hadn't managed to interview any of the town's women. Without input from women - often the group that most directly controls household spending and saving - our research was far from complete.

But when we arrived at the store at 7:00 pm as he'd directed us, Grandfather Zhang was sprawled out on a couch in the storeroom, half-asleep and gazing languorously at the CCTV newscast on the TV in the corner. Our translator, a graduate student at Yunnan University, tapped Zhang lightly on the shoulder. 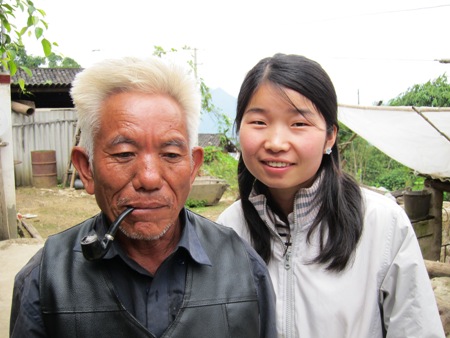 "Zhang Dadie," she said. "What about the interview? Where are the women?"

"The interview!" he replied, rising from the couch. He walked over to a closet and emerged with a crate of Lancang Jiang beers. "Follow me!" he shouted, propping the box of beers on his shoulder and walking quickly from the store into the dark street.

Colin threw me a defeated look. "This isn't looking good," he said, shaking his head. We'd been drinking nearly continuously since nine in the morning, when our host, the former village head, insisted that we take a sunrise shot of his homemade, Chinese-medicine-infused baijiu. In the countryside we'd found that hospitality and alcohol often go hand in hand. 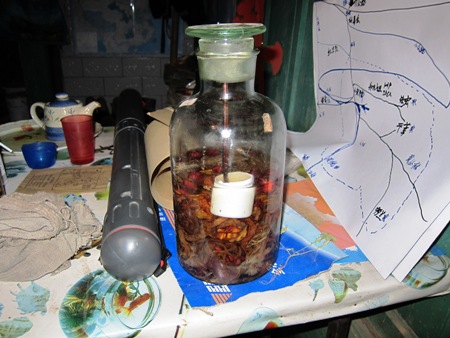 We followed Zhang down the dirt road and into a small courtyard that smelled of smoke. Zhang pointed at a few small stools under an awning outside his house. "Sit, sit!" Zhang insisted as he began to open up bottles of beer and pass them around.

I took a bottle and stepped away into the dark courtyard. I felt frustrated; the surveying had been coming slowly. The previous night, we'd been midway through an interview with our host, the former village head, when he suddenly rose from the table, walked to the waterspout by the side of the house, and began brushing his teeth. It's easy to forget, at times like that, the magnitude of the request you're making, asking a near-stranger to divulge intimate details about his finances, about his way of life.

A few steps away, I saw a man sitting quietly on a small chair. The night was starless. He'd been less than an arm's length away and I'd barely noticed him.

"You can sit here," he said, pointing to a small stool beside him. "I'm also Zhang," he said. "I'm Zhang Dadie's cousin, Zhang San."

As with most of China, Bangdong has its own patois, one whose domain expires at the border of the next village over, a mere two miles down the road. As such, many people we'd met in Bangdong spoke Mandarin with a heavy accent; some spoke no Mandarin at all. But Zhang San's Mandarin was clear, absent even Yunnanese shibboleths like an "s" sound in place of the standard "sh".

I sat down. "You can call me Zhang San," he repeated. 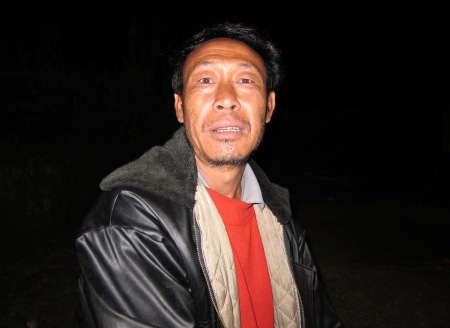 He held out a box of cigarettes. "Have a smoke with me," he said. "I only smoke when I'm happy." I've been offered cigarettes countless times. I usually refuse, unwilling to sacrifice health for a token gesture of respect. This time, however, seemed different. I took Zhang's cigarette. A few light puffs, I figured, wouldn't kill me.

As I faked drags on the cigarette, Zhang told me about his life. He'd been born not in Bangdong but rather in the countryside to the northwest. He'd graduated school in the mid-1970s, at a time when the worst of the Cultural Revolution had already passed but the "Reform and Openness" of Deng Xiaoping had yet to begin.

When China's first "Special Economic Zones" opened in the early 1980s, Zhang followed a group of friends to seek work in the east. He worked for a while driving bulldozers at a construction site in Zhejiang, and when that job ended, he hopped on a train to seek employment elsewhere. By the time his body gave out - "Half of me just started going limp," he told me - he'd worked in nine provinces, from Jiangsu to Sichuan.

At age 50, Zhang chose Bangdong as the site of his convalescence; he had relatives there and it was only a few hours' bus ride to his home village. But in the past few years, the illness had only gotten worse. The local clinic couldn't do anything about it, and so sent him to the county hospital. The county hospital could so something about it, but Zhang didn't have the money for the treatment. So Zhang returned to Bangdong instead.

Zhang paused for a moment. I heard the shuffling of chairs and turned my gaze towards the lighted awning. I'd been so engrossed in our conversation I hadn't noticed that "Grandfather" Zhang had managed to bring over a few of his female relatives after all. A good half hour had passed; Heinz and Zhang Lihui, our translator, had already finished interviewing the women and were preparing to leave.

"If I make it back to Bangdong, how can I find you?" I asked Zhang San. While we'd only spoken for a half-hour, I'd felt a strange sense of connection. Our lives couldn't have been more different; and yet, talking to Zhang felt as effortless as sharing a meal with my college roommate. If I could make it back to Bangdong, I'd want to see him again.

"Find me?" He looked puzzled. "That shouldn't be a problem." That's when he drew from his pocket a white Nokia smart phone. "What's your number?" he asked, handing me the phone.

I took the phone and started to laugh. I couldn't help myself. The background screen he'd chosen featured two blonde bikini-clad models. I entered my number and said goodbye. Zhang didn't get up. He continued to sit and lit another cigarette.

Nice entry and a gorgeous photo of the lake!

Where would one get a bus to Bangdong?

I just had a second look at that picture, is it a lake or low clouds in the evening sun?

The photo is of early morning low clouds above the Lancang River (Mekong). You can get there by minibus from Lincang, about 1.5 hours. There are many buses to Lincang from Kunming, but it is an 8-hour ride. There are also two flights there daily. Just got a discount ticket for 400 RMB.

I AM A WORKER IN POWER PLANT NEARBY BANGDONG VILLAGE.

Lincang area mountains have been in my sights for a while.

Southern Yunnan is wonderful, we visit Jinggu (near Puer) to fly paragliders and visit mountain villages.

We developed a paragliding club and invite anyone to come and have fun or enroll in a course to learn paragliding.