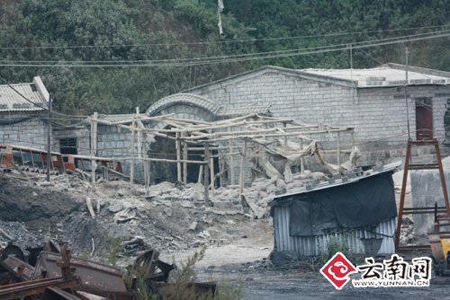 The Xiaosongdi mine, scene of the incident

Residents of Yunnan are accustomed to the province being a little rough around the edges, but accounts of the scene at a coal mine in Honghe last week read more like something straight out of the Wild West.

On November 18, a group of more than 80 coal miners showed up at a rival mine armed with knives and steel bars. A melee then broke out that included gunshots and a large explosion and left nine people dead and 48 more wounded.

The dispute between the neighboring mines in Honghe's Luxi County is said have started when a tunnel from one mine broke through the wall of one of the other mine's tunnels.

In the legal dispute that followed, Zheng Chunyun, manager of the Yuejin coal mine won a judgement worth tens of millions of yuan against the Xiaosongdi coal mine and its owner, Wang Jianfu.

The ruling by a local land management bureau said that Wang had exceeded the boundaries of his mine and authorized Zheng to carry out inspections of Wang's mine to make sure that he was staying inside of his territory.

Whether Zheng had good reason for showing up with 80 armed men at one such scheduled inspection of Wang's mine is unclear, as is who threw the first punch or fired the first shot.

But Zheng and his men apparently got the worst of the battle, with two of his men shot to death and his men comprising most of the casualties from a large explosion that police say was set off intentionally.

Police have detained 10 men in connection with the incident and say that their investigation is ongoing.

Though Yunnan isn't known for producing large amounts of coal, mining for a wide range of substances is big business here and a backbone of the province's economy.

Fighting between rival groups of miners was common in the 19th century. The famous Panthay Revolt (1856=1873) began that way.