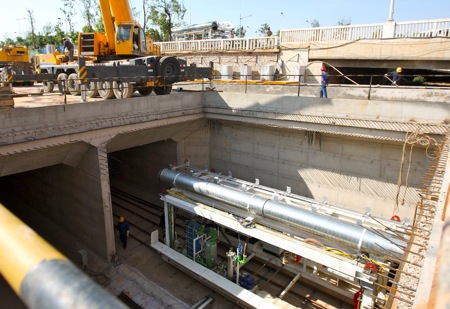 A 450-ton 75-meter tunneling machine at a construction site in Chenggong new district.

The 19.5-kilometer Line 3 is expected to cost 11 billion yuan (US$1.6 billion) and be completed in 2016. The east-west line will have 19 stations, five of which will link to other lines, and will pass beneath the city center.

Work on Lines 1 and 2 began in May, and are currently disrupting traffic on Beijing Lu and Chuncheng Lu. The lines are expected to be completed in 2012 or 2013. It appears likely that there will be an interchange between these lines and Line 3 at at Dongfeng Square.

Line 3 will start from the Shizui station in Kunming's west and run on elevated tracks for a few kilometers before entering a 14-kilometer tunnel section at Mianshan station near Renmin Xi Lu.

This tunneled section will account for most of the length of the line, after which it will emerge again in eastern Kunming at Hongqiaocun station near the third ring road before continuing briefly on elevated tracks to its terminus at the new east bus station.

By linking the west long distance bus station in Majie to the east bus station travelers will have easy access to the stations and quick transfers between them. The metro stop at the east station will also eventually interchange with line 6, which will go to the new Kunming airport.

Line 3 is also expected to have four other interchanges in the downtown area, making it potentially the only line in Kunming's metro system that will interchange with every other line.

When Kunming's six-line metro system is completed it has the potential to ease daily commutes as well as streamline tourism and business travel in Kunming by linking the airport and all of the major train and bus stations. The metro system is currently expected to be completed in 2018.

Please see here for bilingual maps based on plans for the entire six-line metro system that were released earlier this year. Note that the projected number of stations on line 3 has now risen from 16 to 19, but the general route remains the same.

Another place for flooding in the big village of Kunming.

i want this game

i wnt to play this game

QiuHe apparently has a habit of accelerating massive construction projects - presumably so he has new stuff to report for the annual five year plan meetings in Beijing. He accelerated those overhead highways - hope that doesn't come back to haunt us in 5-10 years.

The picture makes Line 3 look kind of shallow - so shallow in fact that they probably don't really need a tunneling machine - should have just open trenched it - could have cut the cost by 20-30%. But boys with their toys. I would have gone deeper and added in REAL sewage piping (gonna need a 2 meter pipe for all the sewage Kunminger's generate - except at Salvadors et al - no solid waste). Also would have added in underground power lines and fiber - maximize the use of a perfectly good underground tunnel!