Kunming to host national disabled games in May 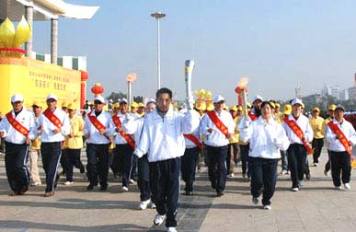 China's Seventh National Games for the Disabled will be held in Kunming this May 12-20, gathering more than 5,000 disabled athletes from around mainland China, Hong Kong and Macao to compete for medals in 20 sports, according to Chinese media reports.

This is the first year that the Games, the largest national competition for handicapped athletes in the world, will be held in western China. Yesterday, five different cities in Yunnan hosted a simultaneous lighting of five 'harmony torches' which will travel through 16 prefectures and cities in the province before convening on Kunming for the Game's opening ceremony in May.

Officials in Beijing and Yunnan have said the quadrennial Games were being viewed as a warmup to holding the Special Olympics World Games in Shanghai this year and the Paralympics Games in Beijing next year. The Yunnan government has purchased dozens of wheelchair-accessible buses and vans to transport the athletes between their lodging and the events.