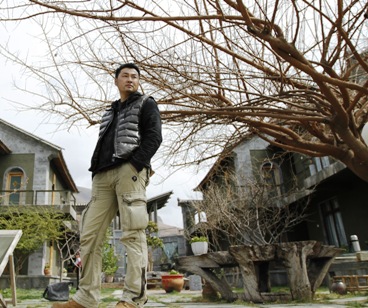 Independent filmmaker Zhao Dayong (赵大勇) is riding a growing wave of media attention and critical acclaim: he was the only Chinese director with a film in last year's New York Film Festival and in March he will be a featured director at the Museum of Modern Art in New York. Zhao will also premiere his new movie The High Life at the Hong Kong International Film Festival later the same month.

Western media has taken to Zhao, with some writers considering Zhao to be the newest Chinese-director-of-the-moment, following in the footsteps of Zhang Yimou and Jia Zhangke.

Zhao's film Ghost Town (废城) has been the main driver of the growing buzz around the director outside the mainland. The film is a stark look at the Yunnanese town of Zhiziluo, where the local Lisu population's Christian residents are coping with demons of the past and extinction in the future. Ghost Town made its domestic debut in Beijing in 2008 and was well-received at the Yunfest Visual Forum in Kunming last spring.

Zhao, a Manchurian from Liaoning who was once an oil painter in Beijing and runs an ad agency in Guangzhou, teamed up with David Bandurski of China Media Project in 2008 to found the film company Lantern Films China. To date, his company has produced five films.

In addition to filming and traveling in Yunnan, Zhao is also connected to Kunming by marriage. This Chinese New Year he stopped by GoKunming's office for a pot of Yunnan coffee and a chat. Here's how things went:

GoKunming: Welcome back to Yunnan, sorry our office is such a mess.

Zhao Dayong: You guys are lucky to live in Yunnan, I wish I could. Don't worry about your office, this is what a young company's office should look like. My office is a mess too.

GK: Much of the attention you've received has been for Ghost Town, what was it about Zhiziluo that made you want to film there?

Zhao: Seeing people with belief and faith. I'd never seen that in my life. I was going to shoot a film at a site in rural Yunnan and my father-in-law mentioned there was a place not far from there where kids' textbooks were all in English. It wasn't English, it was the language of the Lisu people – a missionary created a Romanization system for them a while back.

GK: When did you first start coming to Yunnan?

Zhao: I first came here on holiday in '99. I went to Lijiang and remember an old woman sweeping an alley and how good it looked in the light. She then started fanning a small coal oven – the interplay between the morning light and the smoke was fantastic. 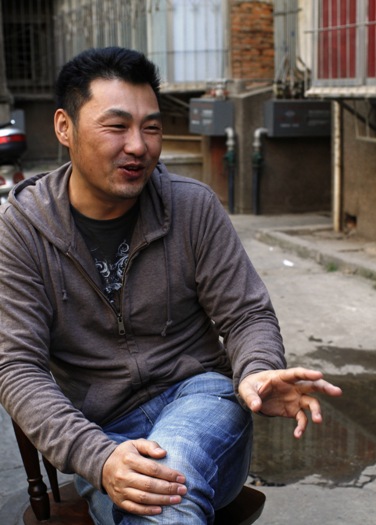 GK: You're attending international film festivals and getting plenty of good press in the West, but are still relatively unknown in China... how does it feel to be increasingly well-known overseas but not in your own country?

Zhao: We want more Chinese to see our films because they're about our lives. Mainland China is a huge market but the channels for reaching this market are very limited. Most foreigners who watch our films find them fresh and different, but it may be difficult for them to appreciate on a deeper level.

GK: A lot of Chinese filmmakers have started out with strong independent film credentials, only to later become wealthy and accused of losing their edge. Are you afraid of making money?

Zhao: No, I'm not afraid of making money, but I'm not afraid of not making money either. You're not going to make money making independent films – be it in China or elsewhere – the most important thing about making an indie film is that you do it for yourself. You can do it for the rest of your life and you'll never feel poor or bored. If there's enough cash to finish the film – and eat – then that's good (laughs).

GK: What were your reasons for starting Lantern Films?

Zhao: Of course you need to be a legitimate entity in order to distribute your own films, but we also have a long term plan. In the future we may start releasing other people's works.

GK: What role do you think film should play in society?

Zhao: Some films make money and some make people happy, but if you're talking about art, a director can give the audience insight into life, into society. For a film to impact society, there needs to be space for contemplation – you have to affect people's thinking. A film like Avatar does well because there's no need to think.

GK: The Kunming government has declared its intention to make Kunming into the 'Hollywood of China', what are your thoughts on this?

Zhao: I think this is empty thinking, it has nothing to do with us.
First and foremost, the government wants to make money. Sure, Kunming and Yunnan have great weather and beautiful scenery, but there needs to be a plan, a market, better traffic infrastructure and the bureaucracy needs to be streamlined.

GK: How do you decide what to shoot?

Zhao: I need to shoot what I'm feeling. There's more out there than any one person can shoot – I just need to focus on what matters to me.

GK: What are your plans for the year of the tiger?

Zhao: I've got a script for a new film and am looking for investment, I need to put out at least one film every year. I'm a workaholic.

Nice interview! Ghost Town plays today for a week at the MOMA in NYC - moma.org/visit/calendar/film_screenings/8878. More info can be found on the dGenerate Films website - dgeneratefilms.com/catalog/ghost-town-fei-cheng/.