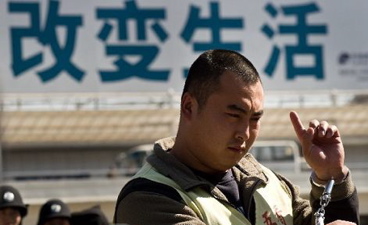 Airport "mafia" ring broken
Local media are reporting that police arrested five men yesterday who have been terrorizing vendors, tourist agents, and other solicitors since 2008 at the Kunming Airport in a mafia-style shakedown scheme.

Police stated that the gang's boss, surnamed Liu, and its other members were all from either Shandong province or northeast China. Their alleged criminal activities consisted primarily of threatening people offering services at the airport with physical violence if those people did not pay the gang a fee.

Police reportedly launched the investigation that led to Tuesday's arrests in late 2009 after receiving reports of "fierce thugs" roaming the airport. Police say that so far they know of at least 100,000 yuan in coerced payments that the gang collected last year.

According to a Xinhua Net report, Yunnan Power Grid Corporation president Liao Zelong predicts that low hydroelectric dam reservoirs will cause a 20 percent shortfall in the province's power generation capacity through the end of May, when the rainy season is expected to begin.

The problem has been compounded by breakdowns and coal shortages at coal-fired power plants.

It remains unclear whether electricity can be imported from surrounding provinces, or if any other measures can be taken to meet demand.

Pipelines to move oil and gas through Kunming
Reuters is reporting that two pipelines will be built to carry oil and gas from Myanmar into China through the Kunming area.

The first will be completed within the next two years and will carry up to 12 million metric tons of crude oil every year from the Myanmar port city of Kyauk Phyu, helping to streamline shipment of crude oil to China from Africa and the Middle East by going overland and avoiding the narrow Strait of Malacca between Malaysia and Indonesia.

A refinery with a capacity of 200 thousand barrels per day is being built in Kunming to process oil from this pipeline.

The other pipeline, with an unknown completion date, will carry up to 12 billion cubic meters of Myanmar natural gas into China every year. Spurs of both pipelines could eventually extend as far as Nanning and Chongqing.

While these projects would seem to strengthen Yunnan's position as an economic gateway to Southeast Asia, China and Myanmar's rocky relationship and Myanmar's history of political canniness signal that they are not without risks.