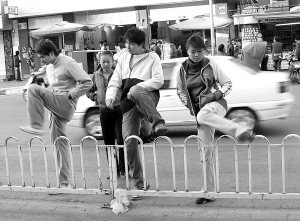 Yesterday the all-Chinese New Kunming Net ran a story about a city survey of the street-crossing habits of 50 Kunming residents.

The story, entitled "Use heavy fines to 'teach' urbanites to 'cross the road'", revealed that 50 of the 50 Kunmingers surveyed habitually use crosswalks. All 50 also knew that crossing streets where there is no crosswalk is illegal behavior. However, all 50 had ignored traffic lights before and 13 regularly hop the barricades that separate opposing traffic directions in the middle of streets (see photo).

The article's main point is that Kunming residents all know the laws regarding crossing the street, yet they often ignore these laws. The story touches upon the plight of a goodhearted traffic cop who works near the Youdian Building and sometimes eats up to four bags of throat lozenges during a shift.

Citizen opinions are printed at the story end. A Mr Tang says Kunming needs better traffic infrastructure. One Mr Li says raising the height of barricades in the streets would be dangerous because old people with children on their backs would still try to cross them, needlessly endangering everyone involved. The ultimate conclusion of the piece is that most Kunmingers would support fines for illegal street-crossing in high-traffic areas.

Kunming traffic is chaotic from early morning to late evening most every day. Educating pedestrians on where and how to cross the street with fines is a nice gesture, but improving traffic will certainly also require installing traffic lights in many dangerous intersections - Dong Feng Xi Lu/Kunshi Lu is a major intersection that comes to mind. More crosswalks would also be good, nobody likes the idea of walking far out of their way to cross the street.