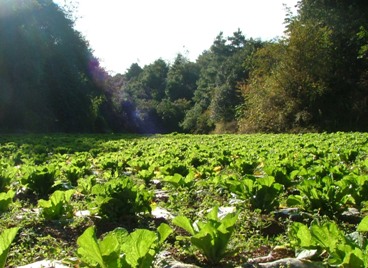 Highly popular in the US, Europe and other Asian countries, organic food is still a relatively new concept in China. However, it seems to be gaining favor among a growing segment of Chinese who out of health and/or environmental concern are willing to spend a little (or a lot) more on certified organic food.

Last week Migrant Worker's Even Pay took us on a visit to Kunming Haobaoqing Organic Farm (昆明好宝箐生态农业园), about 35 km northwest of Kunming, near Tuanjie Village. Located at the east end of the Haobaoqing valley, the 110-mu (96-hectare) farm produces several dozens of varieties of organic-certified vegetables plus organic meats including chicken, rabbit, mutton, pork, duck, goose and even turkey. The farm sells its products in Kunming under the name 'Haobao' (好宝), which means good treasure.

Haobaoqing Farm began applying for organic certification in 2003, which it received in 2005. The stringent requirements of organic certification mandate that the farm re-apply for organic status every year. Over a delicious all-organic meal, Haobaoqing's management discussed the challenges of being an organic farm in Yunnan, the primary difficulty being consumer awareness and understanding of organic food.

According to our hosts, the word organic in Chinese (youji, 有机) is a bit too technical for most consumers, who often think that this chemistry term means the produce has been treated with special fertilizers or is genetically modified. China's 'Green Food' (绿色食品) certification is also a bit confusing for consumers. A-level Green Foods are simply foods whose production meets minimum government standards. Government-approved fertilizers and pesticides can be used in the production of A-level Green Foods. Organic food in China is designated as AA-level Green Food, which requires meeting strict air, water and soil standards.

Five years ago, few Chinese felt compelled to spend extra money on produce and meat that looked similar to what they bought in their local markets. Events in recent years such as SARS, avian flu and a slew of high-profile food safety incidents involving both Chinese brands and international giants including KFC, Nestle and Haagen-Dazs have made hygiene and food safety increasingly important criteria to Chinese shoppers. This shift in priorities has helped propel growth in China's organic market. Organic food also stands to benefit from China's increasing environmental awareness.

As it stands now, there is greater consumer awareness and appreciation of organic foods in China's richer coastal regions. Despite Yunnan being a bit behind the organic curve in China, Haobaoqing's management seemed upbeat about the potential for organic produce and meats in Kunming and Yunnan. One of the most important steps in marketing organic food to the local market is getting people to eat it. To that end, the farm features a restaurant and offers rooms and some basic tour services. Rooms are around the three-star level and run from 88-128 yuan/night. Nobody at the farm speaks English, worth keeping in mind if you are thinking about visiting.

For more information about development of the organic market in China, the United States Department of Agriculture Foreign Agricultural Service has published an informative South China Organic Food Market Brief that is well worth reading.

If you are interested in the farm but need some English-speaking assistance, contact Pesticide Eco-Alternatives Center at peac.office@gmail.com. Just explain what you want to know and someone will get back to you.
-- Even

Pesticide Eco-Alternatives Center, "PEAC" in short, is an NGO located in Kunming city of Yunnan Provice, mainly focus on reducing pesticide risks, promoting organic farming and sustainable agriculture by awareness education among farmers and customers and by encouraging the use of alternative methods(indigenous knowledge etc.) .
PEAC contacts regularly with some certified organic plantaions (eg. Haobao) and non-public-harm farming areas in Yunnan province.
For more infomation, please send us email at : peac.office@gmail.com
p.s. our website is being updated now, so it's not working at present.

You can also contact with me------Xu Rui!
I'm the temporary manager of this farm, Also the part time staff of PEAC. As for me to help Haobao, not for money, just to support the development of organic agriculture.
Any help from you are indeed appreciated.

I am exploring the possibility of doing organic farming in Guizhou.

I need HaoBao's experience and PEAC's expertise. Your suggestions are gold.

I am also open for partnerships.

Please send me your phone numbers and addresses so I can contact you. You can send it to the following email address hectorsuano@gmail.com

I am one with you in promoting organic agriculture.

i am trying to raise a healthy family in Lijiang. It is so difficult to find organic vegetables anywhere and i haven't been able to contact HaoBao Farm as there numbers don't seen to work. probably have to wait until next year until we can start growing our own organic crops.

can anyone help me? did HaoBao farm change numbers?