Previously we published an article about two cyclists who cycled from Kunming to Beijing with hand-powered tricycles, raising awareness for people with spinal injuries – resulting in paralysis — and adaptive sports. In the article there was mention of the Tongren Hospital spinal cord injury unit. 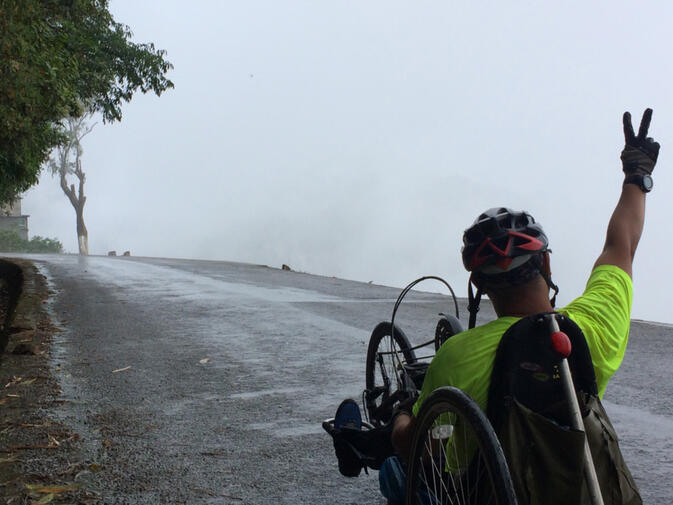 Today we meet up with Pierre, Aline, Virginie and Stephane. The latter three are participating in a groundbreaking trial at Tongren hospital (同仁医院), aimed at making people with completely severed spinal cords walk again — something that has not been achieved before. Pierre is the founder of the French 'Neurogel en marche' association – which loosely translates as 'spinal cord walks again — that has pushed for research in this field and raises funds to finance the trial. There are 12 patients who are participating in the trial at Tongren hospital, six Chinese from Yunnan and six French, all funded by the association.

Aline is 48 years old and became a quadriplegic 23 years ago. She and Pierre were friends, and he decided to dedicate himself to finding a cure – the association was born. Virginie has a similarly old injury and is also quadriplegic, meaning they are both paralyzed from the breastbone down. As a result, they have limited use of arms and hands. Stephane sustained his injury in a motorcycle accident four years ago, and is paraplegic — paralyzed from the waist down, meaning he has full power in his arms and hands. They mention Michael, who is the youngest at 29 years of age, and has the most recent injury — he sustained his paralysis two years ago. As it is, he is the one who is making the fastest progress of all. Each patient has a different medical history and age, which means that everyone's progress moves at a different pace. 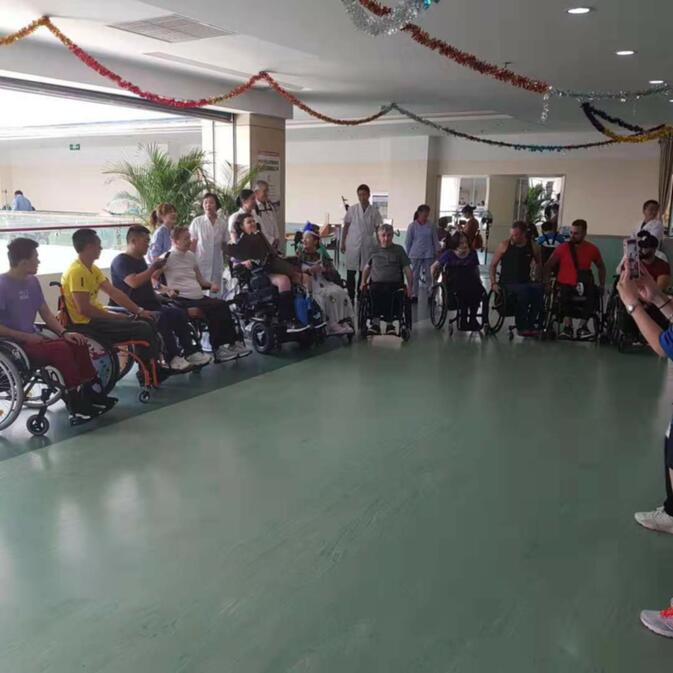 Pierre explains about how they all came to Kunming Tongren Hospital, where they will spend one year participating in a revolutionary medical trial, which has the potential to offer hope for people who previously wouldn't dare hope they could ever walk again.

For 20 years he has been the president of the 'Neurogel en marche' association. The sole goal of the association is to find a solution to complete spinal cord injuries. The association consists of an international council of scientists who are jointly doing a research program.

This is the first time that a patients' organization has developed a clinical trial, without government funding. One reason is that it is privately funded is that experimental research is subjected to rigorous legislation – The Declaration of Helsinki, protecting the safety of patients — in the EU and the USA, and generally requires that it is first tested on animals before humans can participate in a trial. This is virtually impossible to engineer with this kind of injury and treatment program. Pierre argues that since spinal cord injury patients can live quite comfortably in a wheelchair and operating can be potentially life-threatening, there is little incentive from government bodies – and from many patients bound to a wheelchair — to push further.

One famous spinal injury patient we know of is Christophter Reeve. He fought a similar fight for a cure, but focused on stem cell implant, which unfortunately has not brought significant results for people with complete spinal injuries as yet. He passed away in 2004.

The Portuguese neurosurgeon Antonio Reis and the team of Professor Gorio from the University of Milan developed a new therapy which can roughly be described as an operation that aims to 'clean' the spinal cord — involving a transplant of modified adipose or fatty tissue from the body into the spinal cord — for which he wrote the surgical procedure. The operation is followed by a rigorous physiotherapy program, where the nerves will relearn the sensation and practice of walking. However, the operation is the most important part of the treatment. Dr. Reis passed away 3 years ago, which necessitated the association to look for a hospital that would be willing to release this surgery.

Two years ago, they connected with Tongren Hospital, where a similar kind of surgery had been developed. What sets Tongren Hospital apart from many hospitals is that it used to be military hospital and has an unparalleled level of experience with surgery on spinal cord injuries — 5000 surgeries on the spinal cord have been performed over the 20 years to date. This kind of experience greatly reduces the risk for the patients. Researchers from all over the world come here to do clinical trials.

Dr Zhu Hui (朱辉, director) and Dr Liu Yansheng (刘艳生, neurosurgeon) created this specialist spinal cord injury center 20 years ago and developed a rehabilitation program alongside the operations. The 'Kunming scale' is an evaluation of progress in paralysis patients that has been named after the city where it was invented. They can furthermore claim 9 patents on specialist tools they have created for the treatment of spinal injuries. 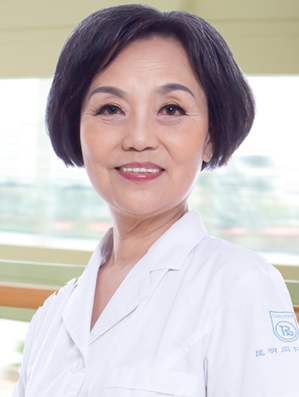 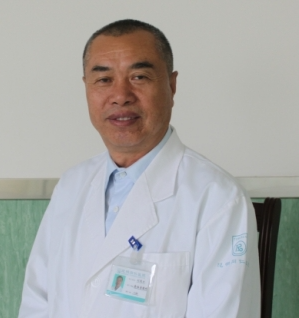 In short, it is very difficult to find a hospital with this wealth of experience, and the risk to the patient would be too high if any less experienced surgeons would attempt this new spinal cord operating protocol.

Earlier this year the patients came to China to start the clinical trial. In March they were all operated in succession with the new procedure, and started together on the arduous work of daily physiotherapy. The operations all went very well, and the participants of the trial experienced no pain. Now they are in the middle of the one year trial, and all are gaining hope from seeing the remarkable progress in the youngest participant. Since it is still in the trial stages, no details can be shared. Suffice to say that seeing Stephane practice walking – with the help of a nurse and a walking rack – and photos and video of the incredible progress made during the physiotherapy, was incredibly moving.

We ask Stephane why he chose to participate in this trial.

I didn't want to stay in a wheelchair. Since the accident four years ago I did research, to find a cure. There is nothing. There is some research, but I wasn't interested in what I found, as it didn't seem viable. Then I found the 'Neurogel en marche' website, and saw that they were looking for six French patients. I thought 'Why not?' and called Pierre. I was scared of the operation. This is one reason why people don't want to participate. It's not easy. it's not just the operation, you have to invest a lot, make an effort every day. You have to go far away from your home and family, who have to travel to come and visit. You have to change your life.

Stephane didn't know anything about China or Kunming before he came here. He says it is a positive surprise, and that he likes living here, even if he misses his family. Life in a wheelchair in China is ok for him, because people are very friendly and helpful and Didi gets them around. Even if they can't enter all the shops — if there is a place that is not accessible, someone will just carry him inside. The city is not well adapted for wheelchair users but is fairly flat. He offers some perspective by saying that he thinks that Europe is not very well adapted either. They did a half marathon in Kunming — Pierre on foot, and three of them in wheelchairs. He mentions that he likes the attitude of Chinese people. There never seems to be a problem. When someone falls during the rehabilitation physiotherapy they laugh — no problem! — and then continue.

Stephane says that a major difference here in China as compared to back home in France is that there is a lot of funding for prestigious – potentially groundbreaking – research, but not much funding for everyday life improvements for people with a handicap. It's the opposite of the situation in France: there is money to keep people comfortable in wheelchairs, but no funding for actually finding a solution for complete spinal injuries.

What will happen after one year? That will be different for all of the participants. They might go back home, or they might keep training at the hospital. Much depends on the progress made in this year, the publicity it might generate after publication of the trial results in a peer-reviewed medical journal, which will hopefully result in securing more funding. What is clear is that the program is the number one priority in the lives of the patients.

As Pierre concludes our meeting he says:

A defining characteristic of us human beings is that we are bipeds. We have to stand on two legs. And that's why we are here in Kunming. 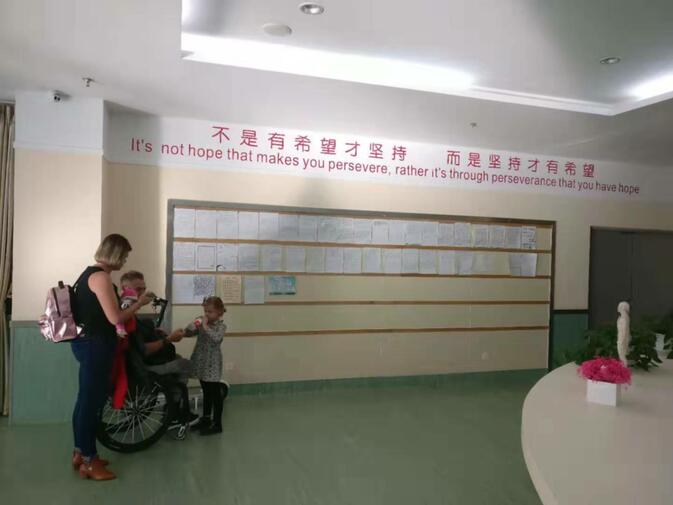 I am rooting for Pierre, Aline, Stephane, Virginie, Michael, and all participants of this clinical trial.

Christopher Reeve is still my all time favorite Superman. More super for flying toward his kryptonite, not away.