GoKunming contributor Pieter Crow is an avid hiker. In the past, he's written about trails and mountain excursions around the province, from Luoping (罗平) and Shizong (师宗) in the east, to a complete circumambulation of Haba Snow Mountain (哈巴雪山) in the northwest. Crow has compiled a list of his favorite hikes in and around Lijiang Old Town (丽江古城), and for the next several months will be showing us around the area. Check back for more soon.

Want a hike that is close and short? Head to Lijiang's Elephant Hill (象山). To get there, make your way to Black Dragon Pool (黑龙潭), a large park on the northeast side of the city. From the pond near the north gate entrance, a paved path and many steps lead directly up Elephant Hill.

The hike to the 2,700-meter summit takes an hour or less, gaining 300 meters in elevation. Ascend a tower on top to find wide-ranging views of the Lijiang valley. The skyline includes mountains called Wenbi (文笔山), Saddle (马鞍山) and Wenhai (文海), all of which I'll write about in later articles. You can also catch a glimpse of Lashi Lake (拉市海) to the west.

The west gate entrance to Black Dragon Pool lies a little south of the entrance just mentioned. From there a short walk leads around the lower end of the pond to one of the most photographed scenes in China. The view on offer is a classic Chinese landscape — Jade Dragon Snow Mountain rising far off, framed by pond, pagoda and arched bridge in the foreground. From this spot, a paved path leads up Elephant Hill, reaching the summit by a longer route. 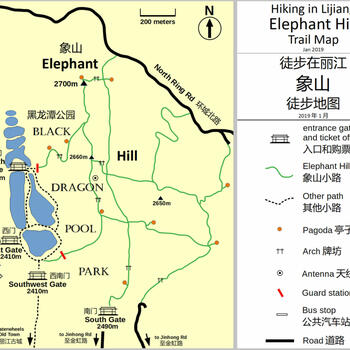 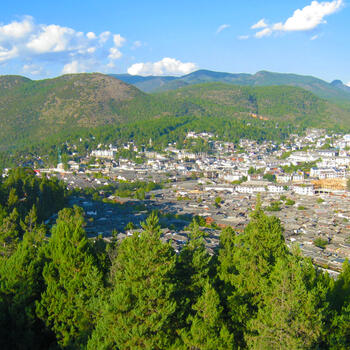 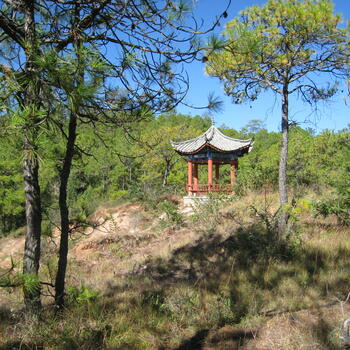 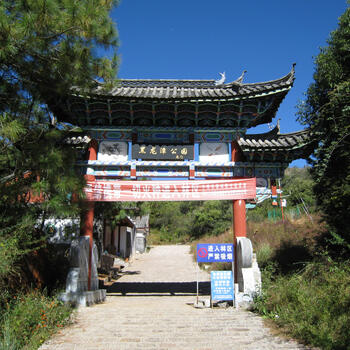 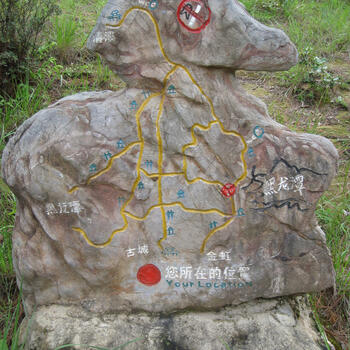 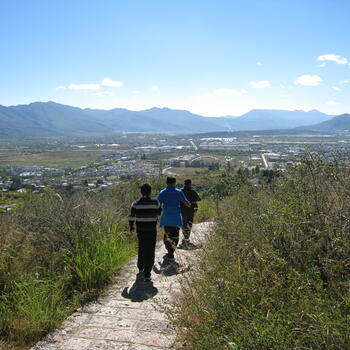 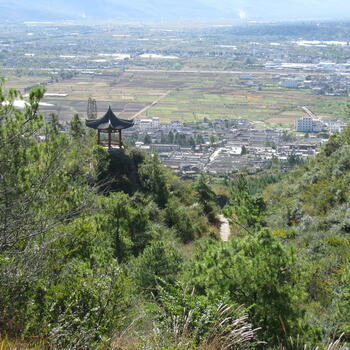 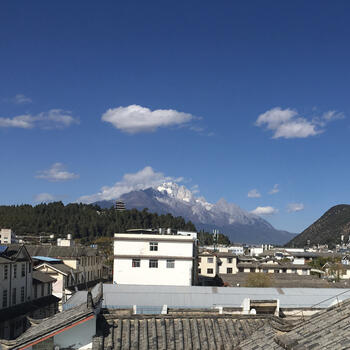 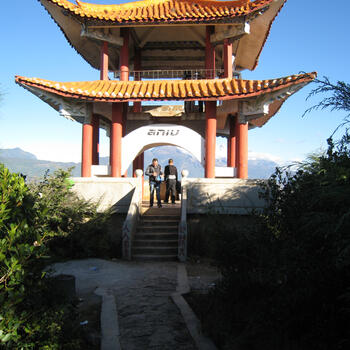 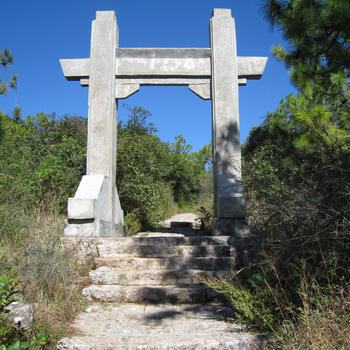 This longer route provides access to paved paths on the south and east sides of Elephant Hill. Various loops are possible, allowing for walks up to a half-day in length. The area is much less frequented by hikers than other options. One reason may be the many Naxi minority tombs, which are often brightly decorated with flowers and glitter laid by family members.

Walking here can provide an eerie experience. I once strolled among the tombs and heard what sounded like strange bird calls emerging from the forest. Further on I discovered the source — Naxi women ululating, calling out to one another. Some of the paths lead down to a road stretching along the eastern side of Elephant Hill. This road, paved a few years back, provides long and fast skateboarding runs for local kids.

Close and short, what's not to like? Sorry to say there's a double downside — fees and regulations. An entrance fee of 50 yuan is required at Black Dragon Pool, although seniors 60 and over get in free. I must confess, I enjoy walking through the entrance saying, "Senior. No fee". Sometimes that's enough to get through. Must be the white hair.

Most of the time, though, the guards ask for proof, as in a passport. Apart from the fee, you'll face a pair of obnoxious regulations. No hiking up the hill after 4pm, and a minimum party of four. The cutoff time is strictly enforced. Minimum party not so much. 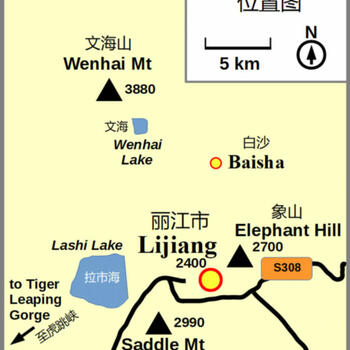 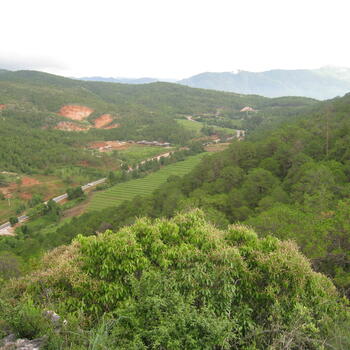 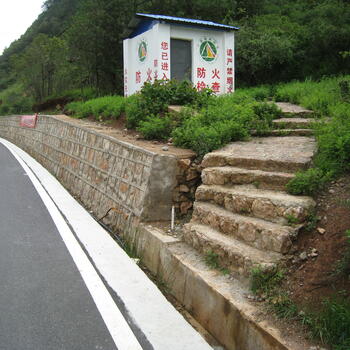 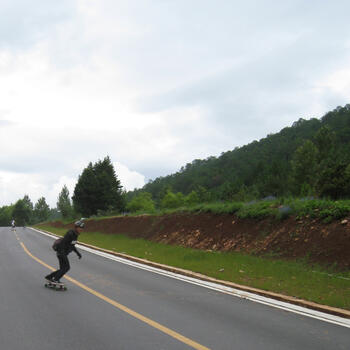 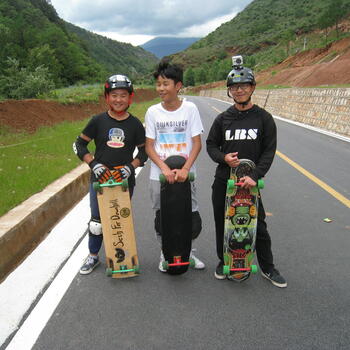 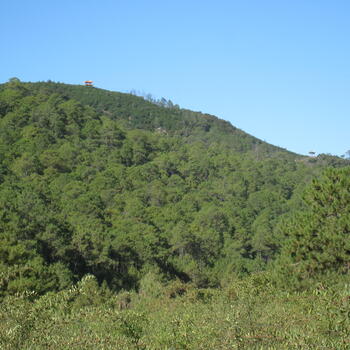 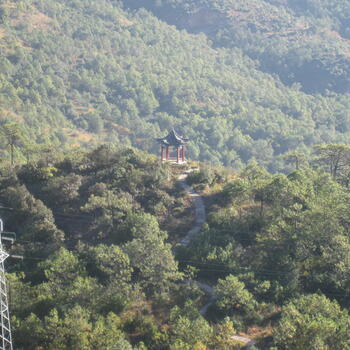 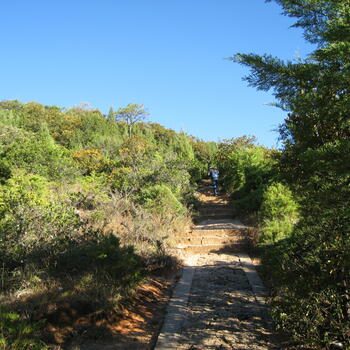 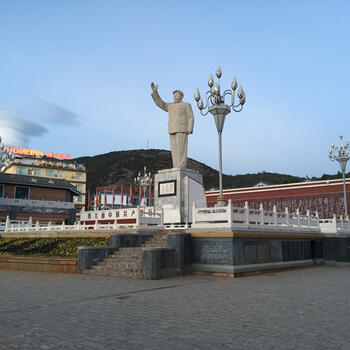 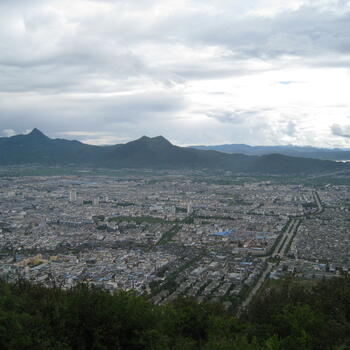 I once arrived for a hike at 3:50pm and the guard told me to come back the next day. I pointed out there were still ten minutes to spare. Then he complained he couldn't let me through as a party of one. I replied that I would leave the next day to climb Haba Snow Mountain, and the day's hike was part of my training. The guard relented and let me pass. At other times I simply waited for more people to show up. Once the guard let three of us pass even though we were strangers to one another.

The south gate entrance of Black Dragon Pool offers an alternative trail head to Elephant Hill. In my experience, the gate is sometimes guarded, sometimes not. Here's how to get there. Jinhong Road (金虹路), running along the north edge of Lijiang Old Town, has a bus stop called Beimen Shichang (北门市场), where you should start.

Three brown pillars resembling totem poles stand nearby. From there, a side road leaves from the north side of Jinhong Road and leads uphill, passing Shanghai New Epoch School (上海新纪元学校). It reaches the south gate entrance in about two kilometers. You can also take a taxi. Just be sure the driver understands you want the south gate, not the west gate where most tourists go!

Determined to avoid the fee and regulations? You can, just use trail heads on the east side of Elephant Hill. Provided, of course, the extra time getting there strikes you as worthwhile. Convenient map boards showing the paths have been installed at various places around Black Dragon Pool, and on Elephant Hill itself.

This article could use a covenient map or two. Watch out for bandits on that hill although the biggest robbers are the guards at the bottom who demand the 80rmb entrance fee for the Black Dragon Pool park.

Although they aren't topo maps, we've added a photo of a carved stone map in the shape of what appears to be a duck. That's in the first image slider. Two more, with more detail have also been added to the second slider.

Look out for the groups of locals, often middle-aged women, outside the park. They'll often be carrying a money bag and are mosly there around the holiday periods.. At first they might offer park entrance for 'half price' but you can bargain that down to 10 yuan or so. In reality they just show you to a way through the fence and once you're inside you'll need to actively avoid the guards who will often ask to see your tickets and escort anyone without one out of the park.

Last month my wife heard a news report on Chinese media. Government is encouraging (mandating?) that parks and tourist sites reduce entrance fees. Goal is to encourage more visitation in response to less travel in slowing economy. The price reductions are to take place all over China. Seems to be working. Starting a few weeks ago, the entrance fee to Black Dragon Pool was reduced to 50rmb.