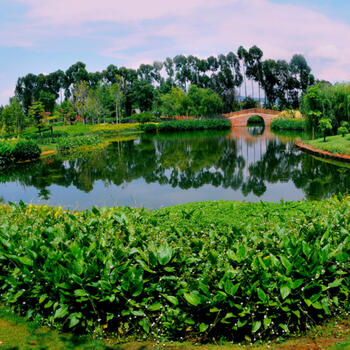 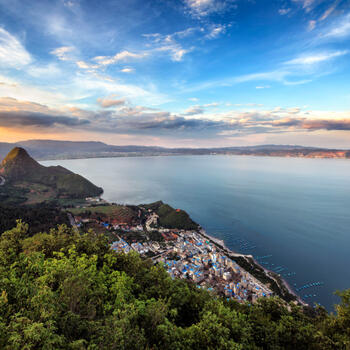 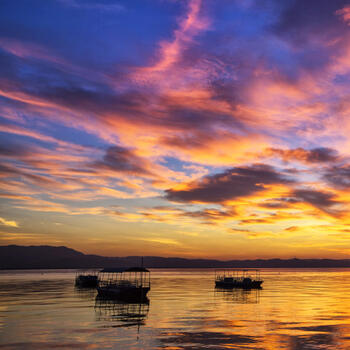 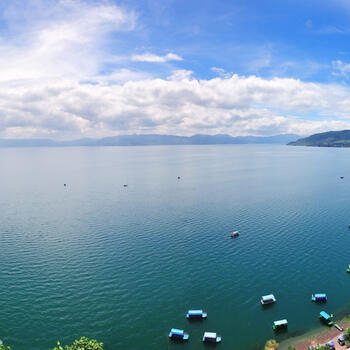 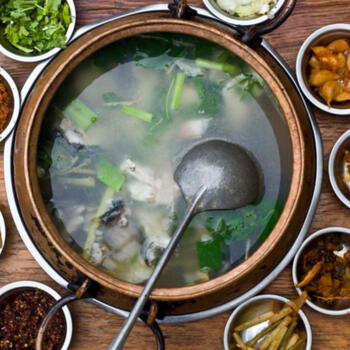 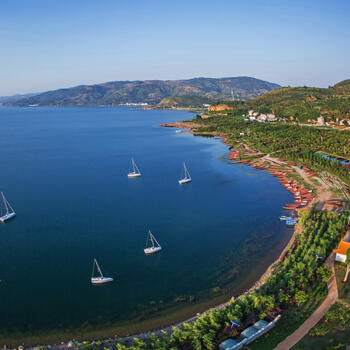 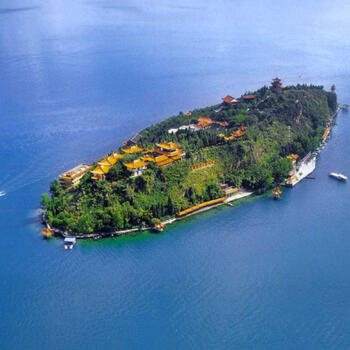 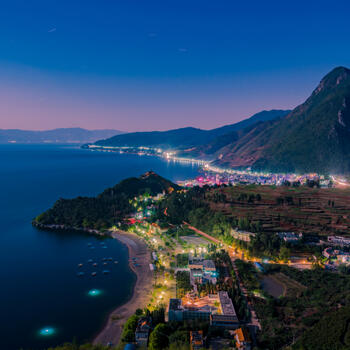 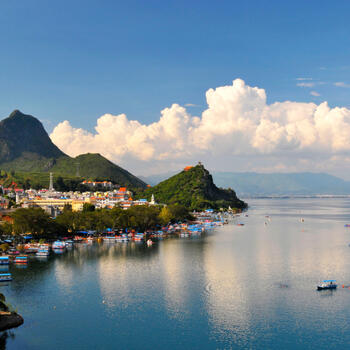 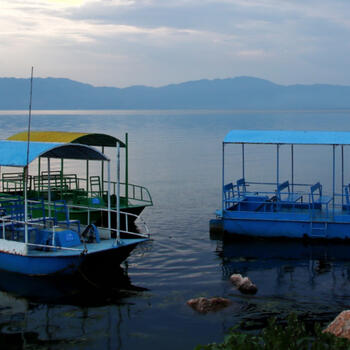 An introduction to Fuxian Lake

Fresh air and a huge, cobalt blue, swimmable lake encircled by lush green hills are not as far from Kunming as you might think. Located in Yuxi Prefecture, Fuxian Lake (抚仙湖) and the surrounding area make for a refreshing couple of days out of the city, or a relaxing place to wind down for road-weary travelers. The long, narrow body of water runs north-south through three counties in Yunnan.

Fuxian sits about 50 kilometers southeast of Yunnan's capital city, and is often referred to as one of China's most pristine bodies of water. It is tremendously deep — 155 meters at its deepest — and therefore holds a much larger amount of water than its surface area would suggest. Partly because of its depth, the lake maintains fairly low water temperatures year-round.

Just starting out a beautiful day on Yunnan's Fuxian Lake

No motorized vessels are allowed to ply Fuxian's deep blue waters, save for patrol boats helping tourist paddlers who occasionally need to be towed back to shore during gusty bouts of wind. The ban on motorized traffic was put into place in the early 2000s in an effort to curb environmental degradation.

Perhaps the most intriguing aspect of Fuxian is the mysterious underwater 'city' no one really knows much about. First discovered in 2001, 'China's Atlantis' was originally thought to be more than 4,000 years old. Recent studies of the carved rock formations and collection of kiln-fired artifacts sitting seven meters or more beneath the lake's surface pin date closer to 1,700 years ago. Scientists' best guess is that the underwater ruins represent the remains of a Bronze Age city that at some unknown point in the past slid into the lake during an earthquake.

In addition to the peculiar sunken town, Fuxian is also home to at least 24 species of fish, many of them native to the lake and living deep below the surface. Of those, the ten centimeter-long Kanglang fish and its recent brush with extinction — brought on by local cooking preferences and the accidental introduction of an invasive predator — is the rarest.

In the past, Fuxian has hosted multi-day festivals featuring a huge assortment of Chinese and Western musical acts. Once upon a time, the Swedish Vätternrundan bicycle race — billed "the world's largest recreational cycling competition" — was also held at the lake. Now that ultra-running has become a national obsession in China, 100-kilometer foot races around the shore can't be far away.

Getting to know the area

Moonlight Bay Wetland Park (月亮湾湿地公园) is a manmade buffer created to help cleanse the lake of impurities. It is increasingly popular with tourists and nature photographers because of its lush greenery and growing wild animal population. The park sits on the northern shore of Fuxian, and entry tickets cost 30 yuan.

From the wetlands, heading down the eastern lakefront takes you to Xiaowanyu Village (小湾渔村). This area is home to the region's two internationally owned resorts. These hotels come complete with pools, private beaches, grass-roofed huts, continental breakfasts and all the amenities you would expect (more on these options below).

The remainder of the eastern shore is highlighted by the town of Haikou (海口), which has an abundance of dining and lodging options, as well as a scuba center. The remainder of the east and southeastern lakefront is dotted with small towns and villages. These can certainly be worth exploring for an afternoon. You'll be able to find friendly villagers, tiny countryside temples, secret guesthouses and footpaths meandering off into the Yunnan countryside.

Continuing on a counterclockwise path, the next major stop is the Sunshine Coast (阳光海岸). Replete with mid-range hotels option, several inns, restaurants featuring local cuisine and a crescent-shaped white sand beach, this area is most popular with tourists looking to spend the day swimming or floating around on peddle-powered boats.

The Sunshine Coast also features easy access to Gushan (孤山) — also known as Solitude Island. Once home to one of the quietest and most unused hotels in the entire province, today the island is open only during the day. It's a great place to hike around old, tumbledown buildings set amidst craggy, cliffside paths. Boat rides to the island usually cost 30 yuan per person. Entry tickets once you arrive at Gushan are also 30 yuan.

Swinging up the remainder of the west coast leads to the Luchong Scenic Area (禄充风景区). Built at the foot of lofty Bijia Mountain (笔架山), Luchong offers many of the same services as those available on the Sunshine Coast, just at slightly elevated prices. 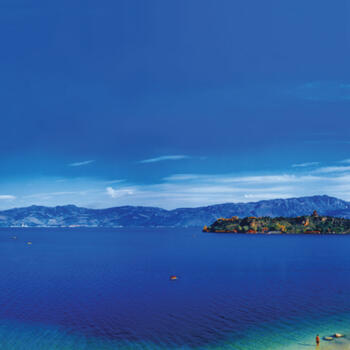 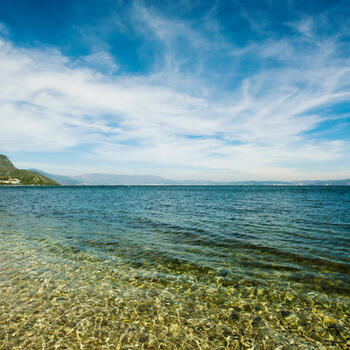 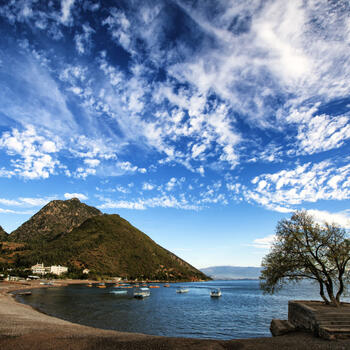 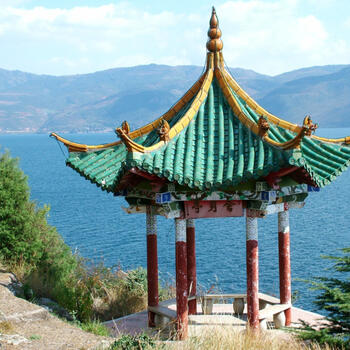 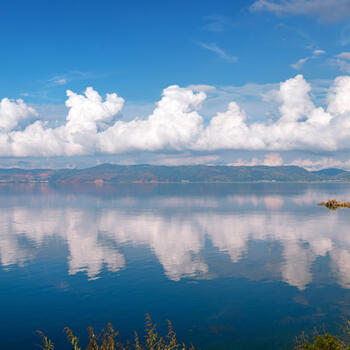 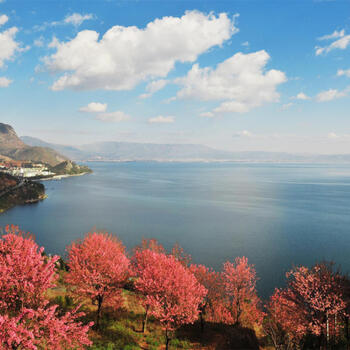 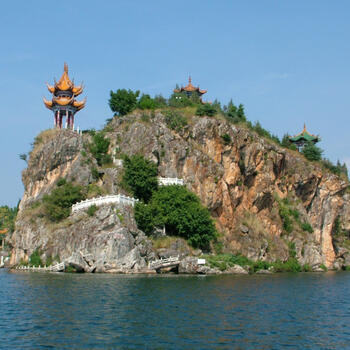 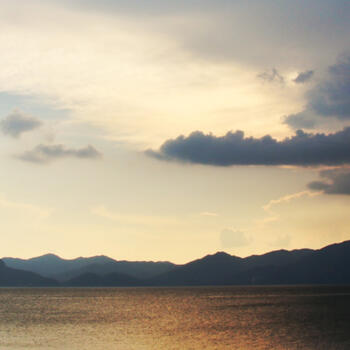 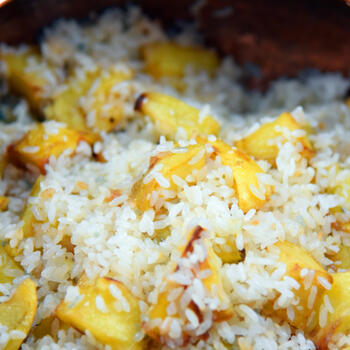 Activities and recreation at Fuxian

Boating: All manner of vessels are available for rent at Fuxian. Big, family-sized peddle boats seating up to four are the most common. You can find them at venues on the western shore, especially at the Luchong Scenic Area and along the Sunshine Coast. Fees typically run around 200 yuan per day, with prices during Chinese holidays rising with demand. Many lodging options also rent kayaks by the day.

Sailing: Sailboats are a slightly expensive but lovely way to get out on the lake. The Fuxian Lake Sailing Center in Haikou Village has boats with captains for 1,500 yuan per two hours. Their vessels hold up to eight passengers, with smaller groups combined on one sailboat.

Camping: Parts of the lakeside, especially the eastern shore, are less developed for tourism, but every hamlet seems to have a least one restaurant and rooms to rent for the night. Hikers might have better luck on the east side, where small footpaths run in all directions through the hillsides near farms. Locals are often quite receptive to requests to camp on their property, and are sometimes eager to check in frequently and chat. Make sure to ask first for permission if you plan to make a fire, as open flames are often banned during the winter dry season.

No motor traffic is allowed on Fuxian Lake, so sailboats are the preferred choice

Scuba diving: PADI-licensed Qianle International Diving Club in Haikou Town offers certification training for the uninitiated and planned dive tours to those with experience. Diving at Fuxian is one of the only — if not the only — government-approved scuba option in the province.

Swimming: The best options for swimming are at the beaches on the Sunshine Coast, inside the Luchong Scenic Area and at the lake's two resorts (see below for more information).

Just chillin': Fuxian is far enough away from any major town or city that the laid-back atmosphere is a big draw for many. Lakeshore hostels squirreled away in little villages provide excellent refuge for those looking for an escape. But those staying in slightly more expensive digs at popular destinations are still able to find peace and quiet, especially after the sun goes down. Take a book and enjoy the calm!

A breakfast of wandoufen, a Yunnan delicacy made from pea flour and typically served with cilantro, dried spicy peppers, chives and sesame oil

Lodging, eating, getting around

Mid-range alternatives: The Dream Cloud Hotel on the north shore, Lake Guesthouse in Haikou and Senhai Jinguo Manor just north of Haikou are all good middle-of-the-road options. The latter of these has blueberry and strawberry fields where guests can pick fresh fruit under the sun.

Budget options: Guesthouses and simple hostels abound around the lake. Usually they have small restaurants on the first floor, with modest rooms above. A few of the best include Fuxian Lake Laohuang Guesthouse, Jinhailan Hotel and Gushan 63.

Fuxian Lake cuisine: For a fairly small spot on the map, Fuxian Lake has a lot going for it in terms of food. Pancakes made with tiny, fried freshwater shrimp — called xiabing (虾饼) — are a constant roadside option. Another ubiquitous treat is copper pot rice with ham and potatoes (铜锅洋芋饭) — a modest but delicious carbohydrate bomb. Fish prepared whole, in spicy hot pots or barbecued are also available everywhere. Don't forget to try the nearly endless options of baijiu (白酒) liquor flavored with all manner of fruits and herbs.

Transportation options: Getting from one place to the next is fairly straightforward at Fuxian if you know whom to ask. Local buses ply the ring road encircling the lake about every two hours. Simply tell your hotel or guesthouse proprietor where you want to go and they'll lay out the choices and prices for you.

Minivans for hire are also available at every spot along the lake frequented by tourists. For more information concerning lodging choices, restaurants and nightlife options in the larger Yuxi area, check out our searchable listings pages.

Getting to Fuxian Lake

From Kunming the most commonly used option is public transportation, as Fuxian does not have an airport or train depot. Buses headed to Chengjiang Bus Station (澄江客运站) depart from Kunming's South Bus Station (昆明南部客运站). They leave throughout the day as they fill with passengers, running from 8:30am-11pm. Tickets cost 20 yuan per person and the trip can take as little as an hour, but traffic conditions can push that longer.

Don't forget these bus routes do not reach the actual lake, but instead park at the Chengjiang Station about five kilometers from the north shore. From there, you can find a minibus or van to take you to your preferred destination.

From Yuxi City the setup is much the same. Buses to Chengjiang depart Yuxi West Bus Station (玉溪城西客运站) throughout the day beginning at 7:40am, with the last leaving at 5:15pm. As above, buses do not depart on a schedule, but instead only when they are sufficiently full of people. Fares run 23 yuan per person, and the trip usually lasts around two hours.

Heads up Patrick, the high speed rail train from Kunming to Yuxi has commenced. A mere 32 minutes ride for 40 rmb.

Also, for those staying at Hilton Yuxi Fuxian Lake, just in their backyard you can scuba dive over the underwater city. Hundreds of villagers were tragically drowned in that lake during the infamous earthquake... buried heirloom relics ought to be protected from opportunists.

Safe swimming, even for the body conscious.
About 1km north of Haikou is the village of Reshuitang热水塘. There is a beach and lots of peddle boats. Lots of people are taking the peddle boat out a few hundred meters to swim. These peddle boats are about 4m long by 3m wide, and make a big enough platform to go out, play, picnic for the day, and swim. There is even a rope ladder over the side to help getting on and off the boat. The boats are 30rmb/hr or 50rmb unlimited, well worth the money.
You can get a long way away from anyone else for a bit of privacy, you could even skinny dip, or topless sunbathe if you miss that. Nearly all of the local swimmers are using floatation and so you need not be embarrassed about that. For those who are not extroverts, or have children, or just want privacy, this is a great option. Don't leave your sunscreen in the car like I did.

Addendum. These peddle boats seat up to 7. The water is very high quality. The sun sets later on the east side. On the west you have the mountains shadow and loose the sun much earlier in the day.